Mobile keyboard company Fleksy has followed in the footsteps of SwiftKey by making its Android and iOS app completely free.

With seven million downloads to date, the San Francisco-based company’s app replaces the default keyboard on a user’s phone. And with $6 million in investment, Fleksy was one of several companies to capitalize on Apple opening up to third-party keyboards last year. However, while fellow keyboard company SwiftKey dropped its $4 download fee last June — choosing to monetize through selling premium themes instead — Fleksy continued charging $4 to install its app, a fee that subsequently dropped to $1.

Fleksy’s move is motivated more or less by the same reasons as SwiftKey’s — by going free, it will encourage more downloads and open the doors to additional monetization. Indeed, Fleksy launched premium themes last July, letting users tailor the look and feel of the keyboard. Then in December, the company introduced branded themes, including Disney’s Frozen and the Hunger Games, which cost $2 each. 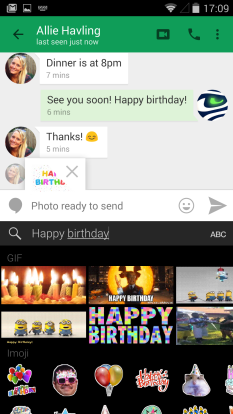 The company also launched “extensions,” basically letting users drag-and-drop extra features into the app, including one that enables you to send GIFs directly from your keyboard. And, back in March, Fleksy announced a partnership that brought Yahoo’s search engine into the mobile keyboard as an extension.

However, there are only three Extension slots available for free — users can pay to procure more. Fleksy clearly has the means to make money through in-app purchases, so by pulling down the paywall for one-off downloads, it hopes to cash in on a longer-term plan.

“We want every smartphone user to have the opportunity to experience fast, expressive, and intuitive typing,” explains Fleksy’s CEO and co-founder Kosta Eleftheriou. “We believe the best way to do this is to make the app free for everyone.”

The latest app update also brings a new “Highlights” feature, where Fleksy suggests additional content, such as GIFs and stickers, based on what a user types. And this will open a new monetization conduit “in the coming weeks,” we’re told. It’s not clear what this will entail, exactly, but a safe guess would be that users will be able to pay for premium content to include in their messages.

Meanwhile, to appease those who have already paid to download the app, Fleksy will be offering $8 worth of new themes and extension slots for free.