Numenta today released Grok for Stocks, a new mobile application that tracks the trading patterns of companies in the stock market.

The new Google Play app can monitor stock price, stock volume, and Twitter activity for hundreds of publicly traded companies, and it uses artificial intelligence software based on Numenta’s research on how the brain works. The app is the latest example of Hierarchical Temporal Memory (HTM) technology, a machine-learning technology that is based on years of brain research. 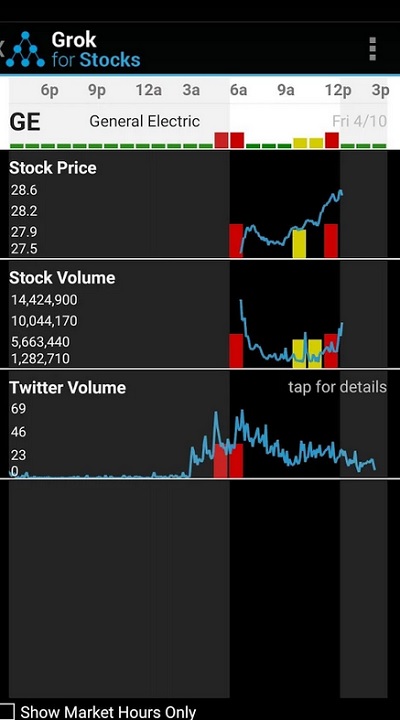 Above: Numenta’s Grok for Stocks

The app also shows how HTM can be applied to streaming data and the Internet of Things, or making everyday objects smart and connected. Grok for Stocks learns the normal trading patterns for each company and it notifies you if something unusual is happening to any of the companies.

Redwood City, Calif.-based Numenta also bills the app as an easy way to learn about HTM.

During the past two years, Numenta has created a series of example applications to illustrate the capabilities of HTM. The first application, Grok for IT Analytics, used HTM to detect anomalies in Amazon Web Server metrics. Numenta also published example source code that uses HTM to detect anomalies in human behavior and in global positioning system (GPS) tracking data.

“Grok for Stocks is our most accessible demonstration of Numenta HTM technology,” said Numenta CEO Donna Dubinsky, in a statement. “Until now, it has required programming expertise to experience HTM-based anomaly detection. With Grok for Stocks, it is as simple as downloading the app to your smartphone from the Google Play store.”

Numenta said it is providing the source code for Grok for Stocks under an open source license at Github.

Grok for Stocks applies Numenta’s HTM modeling and anomaly detection to 200 large capitalization public companies. It automatically models three data streams for each company: stock volume, stock price, and Twitter volume. The HTM models learn continuously, receiving new data every five minutes. HTM learns what is “normal” for each of the data streams from each company. The companies are ranked from the most anomalous to the least anomalous over the previous hour. Grok for Stocks lets you see the text of any tweets as well, often explaining why the company is showing an anomaly.