Facebook is giving users more control over who they see in their News Feed by letting them prioritize posts from particular friends and Pages at the top.

Unlike Twitter, which has traditionally published posts chronologically in an endless stream based on when your “friends” tweet, Facebook uses algorithms to determine what content appears where, and when, in your News Feed. It uses a number of “signals” to determine this, including the popularity of a particular post, who you typically interact with most, and keywords used within the message. 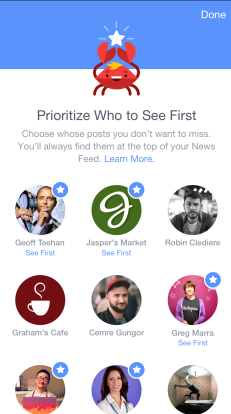 But the algorithm is far from perfect, and most people will miss hundreds of potentially interesting posts from people, simply because Facebook reckons you might not like it.

Now, however, within the News Feed Preferences settings, you can tap on profiles of friends and brands to prioritize their posts first. Anything they’ve shared since you last visited Facebook will then appear at the top, and a little star next to it will show that it’s there because you said so.

For now, these controls will only be available within the iOS app. It will be arriving on Android and the Web in the “coming weeks.”

In addition to prioritizing friends, Facebook also revealed today that it’s introducing a new feature that helps you find new Pages to follow — these are based on similar Pages you’ve liked in the past. This is along the same lines as how Twitter recommends other people and companies to follow based on accounts you’ve actively chosen to connect with.

This is the latest in a long line of moves by Facebook to ensure users aren’t pushed away from the social network due to boring posts from “friends” they barely know.

Back in November, Facebook rolled out a feature that let users unfollow people, Pages, and Groups from a single place. Also, when you choose to “Hide” a story that shows up in your News Feed, you can also indicate whether you’d like to see less content from that person or company in general. It’s essentially manual feedback that helps support Facebook’s algorithms.

Then last month, Facebook revealed it was making changes to the News Feed based on the amount of time people spend on individual posts. This is another “signal,” in addition to Likes and comments, that indicates whether a post will resonate more widely.

If you have hundreds or thousands of friends on Facebook, and follow even a dozen companies, the Facebook News Feed can be a random concoction of content  And that’s exactly what Facebook does not want — by giving just a little control back to the user here, it goes some way towards giving the user a better say in what they see.