If you’re going to the French Riviera to frolic with celebs and take selfies with Kim Kardashian and drink no bottle of rosé that costs less than €200, then obviously you have to arrive in style.

So when VentureBeat asked me to cover Cannes Lions, the famous drinking/carousing/partying spree that masquerades as a marketing and advertising conference, I made my price clear: Pay for me to take the UberCopter, or you can go suck it. Though I said it in French, because everything sounds nicer in French.

I first heard about UberCopter when it launched during the recent Cannes Film Festival. Uber has targeted a critical need.

For those of you who have never been to Cannes (which is probably everyone reading this), to get there you have to fly first to the Nice Airport. From there, you take a car or limo or bus about 30 minutes to the southwest. And by 30 minutes, I mean an hour. Because this is France, and everything takes longer here.

I did this a couple of weeks earlier for another conference. The organizers paid for me to take a private car that was air-conditioned and comfortable. But still, there I was, puttering down the highway in traffic, staring at the guard rails, watching the profitable seconds of my life tick by, unable to catch much of a glimpse of the Côte d’Azur.

I remember thinking, “I bet even Boy George gets treated better than this.”

Thus, UberCopter. VentureBeat’s brain trust relented to my demand, or perhaps misunderstood my French and thought I was ordering an avocado sandwich rather than making veiled legal threats. French can be confusing like that. (Note: “avocat” is the word for both lawyer and avocado in French. True fact!)

Anyway, when I arrived at the Nice airport, I whipped out my phone and punched up the Uber app. Et voilà: 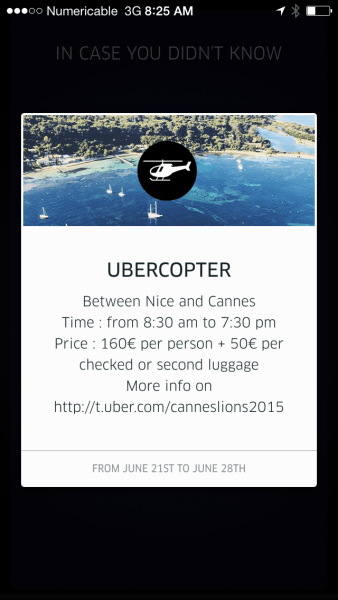 I’ll admit, I was getting a little giddy at this point. I’ve grown accustomed to the good life since moving from Silicon Valley to France last summer. And now, at last, I would be treated like the king that I imagine myself to be.

My mind ran wild with images of the pampering to come as a van drove me out to meet the helicopter. I pictured myself gliding into the back of a sleek Sikorksky S-76C, sinking into the rich leather seats, reaching across to pour myself a glass of champagne, watching CNBC Europe on the TV.

Above: That’s what I’m talking about it.

But when the van pulled up, what I saw was a four-seater Robinson R44. 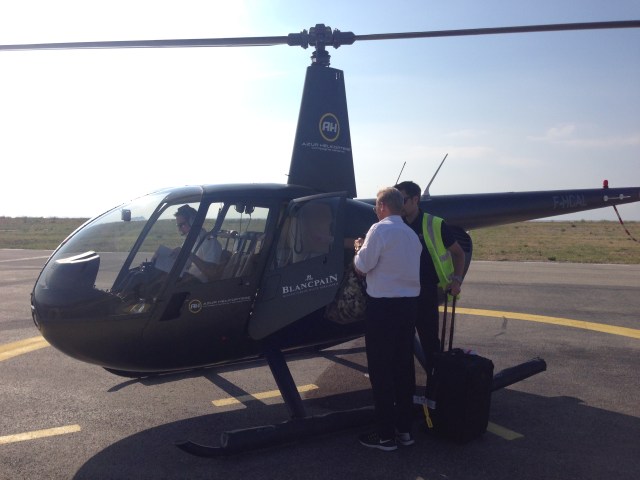 Above: Your UberCopter is ready.

Now, this was a perfectly serviceable helicopter. Totally gets the job done. So I tried to hide the disappointment on my face, which was easy enough because the wind from the main rotor blade was pushing the fat of my cheeks back into a smile.

I climbed aboard, strapped in, placed the headset on, and was all set. 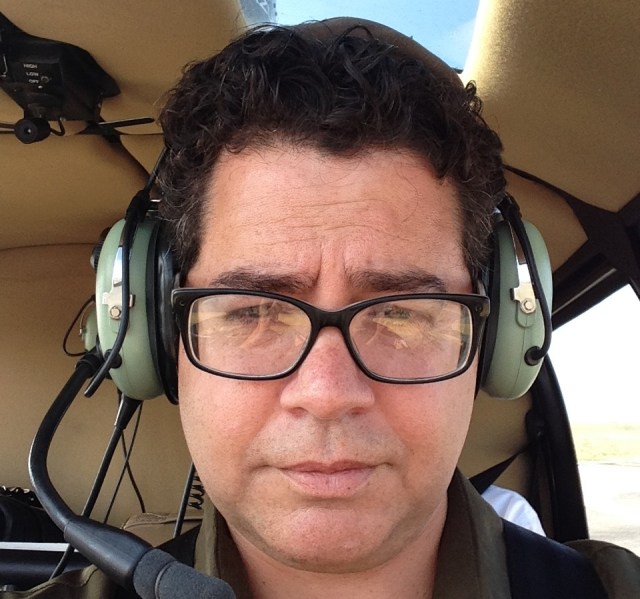 The pilot lifted off and headed straight out over the water. The ride was smooth and I must say the views were spectacular. Okay, champagne would have been nice at this point. But it was 9 a.m., and typically we don’t start on champagne in France until at least 10 a.m. 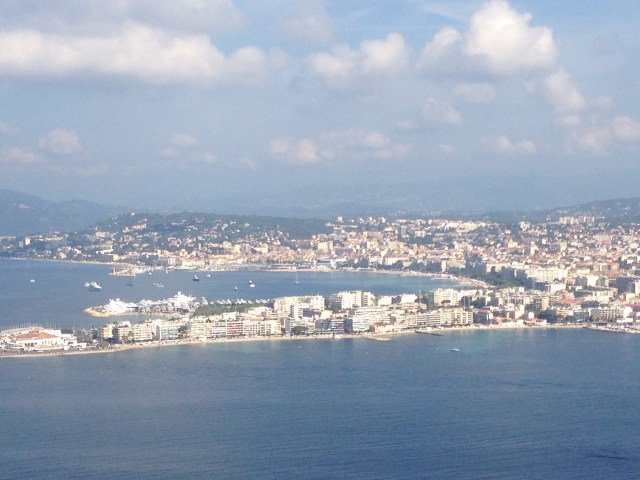 Above: Not Silicon Valley

As we neared Cannes, the pilot kept close to the shore and did his best to make me feel like a VIP.

He even buzzed over the cozy little housing compound we recently purchased on a nearby island, which was pricey, but still less than a 1-bedroom apartment in San Francisco’s Mission District. Plus, no Google busses constantly rumbling through. 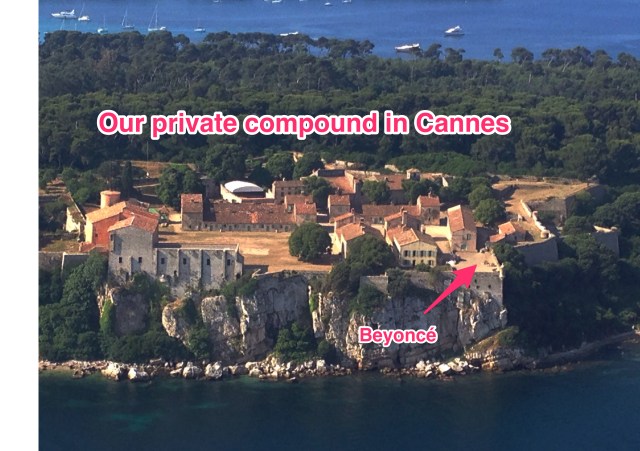 We finally landed at the far end of a pier in Cannes, and I stood waiting for a minute, assuming someone could come fetch me in a pedicab. Or that at least they’d have a Segway standing by to carry me to the waiting area. But no. I schlepped the last 20 feet to a nearby couch, where an Uber driver came to take me to my hotel. 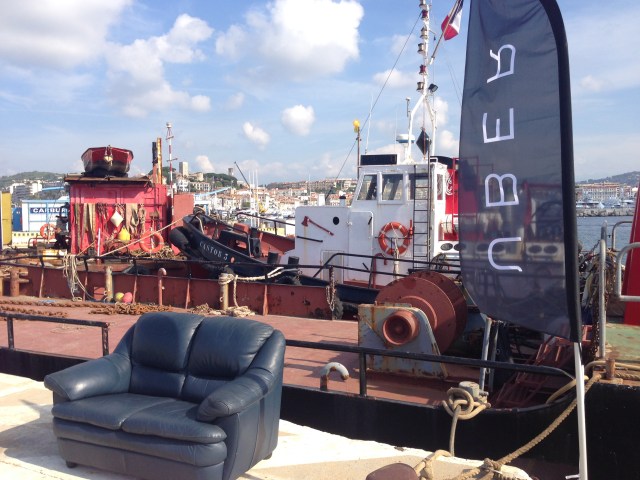 Above: There are worse places to wait for an Uber.

I was fortunate, of course, because this ride happened before taxi drivers across France staged a massive protest that resulted in Uber deciding to suspend its UberPop service in the country. I suppose we could have been dodging various projectiles rather than having a nice, smooth ride.

But the good news for us patricians is that it’s still all-systems-go with UberCopter. Hopefully, Uber will keep investing in upgrades. For now, I would say UberCopter represents a good start, a nice version 1.0 with some kinks still to be worked out.

UberCopter is also a good example of the way Uber continues to try to adapt its model to local circumstances. The company recently announced UberBoat in Istanbul, for instance.

Services like UberCopter and UberBoat (or UberCamelRides or UberJetpack or UberWhatever) may never be big money makers. But during the week of Cannes Lions, the company said its fleet of a dozen helicopters served “hundreds of people.” Those are certainly branding wins for a company that needs to create long-term, loyal customers to justify its ever-ballooning valuation. (Hey, Uber Balloons!)

Overall, I was more than satisfied with my first UberCopter experience. It gave me just enough of a taste of being a VIP to want more.

Later, when I walked into the press room with a bit of swagger, and I could sense that all the other journalists were very impressed with me and secretly envious, even if they managed not to show it on their faces.