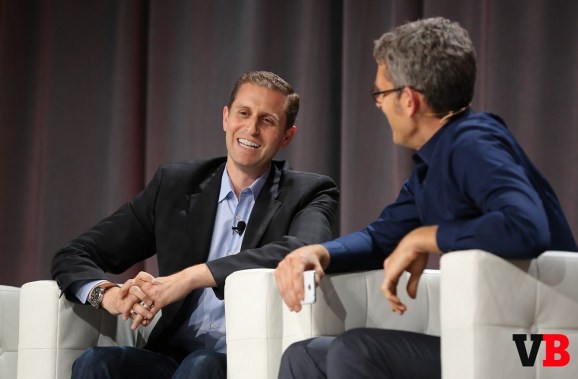 Mark Howard, CRO of Forbes, with Matt Marshall of VentureBeat at MobileBeat 2015.

“We came out of the global recession wondering how to survive,” Howard said. “One thing that was clear is that the economics of journalism were broken.”

Reporters, copy editors, and fact checkers were expensive, and their work was time-intensive. But Forbes bought a startup, True/Slant, which allowed it to recruit an army of freelance contributors. The freelancers used the platform to easily create their own WordPress-based accounts and publish their own stories, getting paid small amounts based on metrics that Forbes wanted to reinforce. Rather than paying for page views from readers who never returned to the site, Forbes incentivized writers to get the same reader back five times or ten times. The writers could reach out on social platforms and help spread the word.

Now, Forbes has 1,500 freelance contributors, and they publish 300 to 400 original stories a day. That has created tremendous search-engine-optimization (SEO) results for the Forbes content, which gives it great standing in Google search results. In fact, 60 percent of the traffic from the stories comes from search. And the platform works well on mobile, and is generating loyal readers because the freelancers are incentivized to produce quality articles, rather than “click bait.”

The strategy was focused on Google, Howard said.

“In terms of traffic acquisition, it turned out that way,” he explained. “Many publishers try to milk Facebook and others. For us, it is not the primary source of traffic. We recognize the search algorithms change all of the time, but this is on brand for us.”

Mobile revenue is only about 20 percent of the monetizable inventory. Web-based ads on the desktop allow for deeper engagement, and Forbes can also put more ads per page on a desktop page. Still, the company isn’t panicking about this situation. It believes that it is making progress in closing the gap between mobile traffic and mobile revenue. Howard said the company is working with mobile monetization companies to try to accomplish this.

Forbes has no pay wall, and most readers never log in or register. But they come back.

Forbes recently acquired Camerama, an “acqui-hire,” where the founders were doing something with an app that they hadn’t seen before. In October, they will release a new app, dubbed “Under 30.”

For four years, Forbes has been creating a “30 under 30” list of people driving change in the world who have tremendous social influence. The company held a summit for that list and invited 1,500 attendees. The social footprint from that summit had 1.2 billion social impressions.

“That 30 under 30 list has been a smashing success,” Howard said.

The app will be only for those attending the summit. That will help all of the attendees feel like they are in an exclusive group. It’s not purely about monetization, but about providing an experience that the attendees are proud of.

“It’s very much on point for us and it lets us leverage a new type of platform,” Howard said.

That’s not bad for a 98-year-old company.