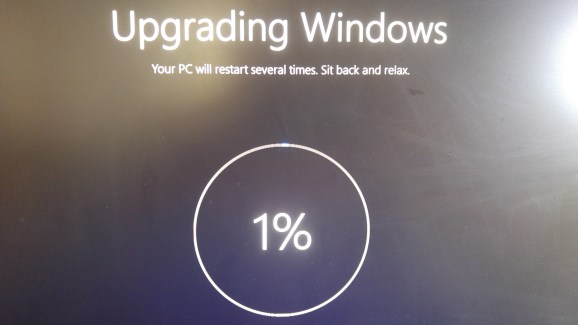 With the launch of Windows 10, Microsoft is telegraphing an attitude one doesn’t often see in companies worth hundreds of billions of dollars: Humility.

The humility is a calculated posture, but I found it sort of touching. You see, humility is necessary in order to set the company up for redemption: Redemption from its years of arrogance as a market dominator and tin-eared monopolist, sure. But more immediately, redemption from its embarrassing failure to capture a significant portion of the mobile market, despite repeated attempts. And redemption from its missteps with Windows 8 and Windows 8.1, which found few fans, even among the Microsoft faithful.

Redemption is exactly what Microsoft needs if it’s going to achieve its most immediate goal: Getting one billion devices running Windows 10 within two years.

In a meeting with Microsoft communications chief Frank X. Shaw this week, VentureBeat heard again and again that the company has made a realistic assessment of its recent failures, is ready to own up to them, and wants to make things better.

For example: The market reception for Windows Phone included “a lot of surprises,” Shaw deadpanned. He acknowledged that 3 percent market share is not where the company hoped to be in smartphones at this point.

Windows 8 did not find the traction the company had hoped for, and its compromises between tablet and PC users weren’t fully thought-through, Shaw said.

Even the beta-testing process for Windows 10 could be a bit “jarring,” Shaw acknowledged, as the company overhauled Windows piece by piece, sometimes resulting in a “Frankenstein-like” design for various early releases. (Those inconsistencies have since been fixed.)

This week, Microsoft took the first big step toward making up for those failures by releasing Windows 10. It is, the company says, the “last” version of Windows. What that means is that instead of launching major new versions every few years, Microsoft is going to continually update Windows, treating it as a service, rather than as a monolithic piece of software.

Getting everyone on the same basic version of Windows would be a tremendous accomplishment for Microsoft. A billion devices running the same version would make Windows, once again, an incredibly compelling platform to develop for. And it would also fix one of the company’s biggest, longest-standing bugbears: The dogged persistence of outdated versions.

Currently there are over a billion Windows devices — mostly desktop PCs and laptops — but they’re running a wide range of operating systems. According to NetMarketShare, almost 12 percent of the PCs browsing the Web today are still running Windows XP, a version of the operating system released 14 years ago. Sixty-one percent are running Windows 7, a version released six years ago, in 2009. And just over 13 percent are running the latest version, Windows 8.1, even though it’s been out for over a year.

If Microsoft succeeds in upgrading a vast number of those computers to a single OS, and adds in a bunch of mobile devices, tablets, Xboxes, and who knows, HoloLenses, all running Windows 10 and all receiving the latest feature updates and security patches as soon as they’re available, then it will have achieved one of the greatest accomplishments of its history.

You see, Apple’s great advantage right now is the relative consistency of its platform. Both OS X and iOS have a remarkably narrow range of versions on the market at any given time, and Apple is able to upgrade its customers at an impressively rapid rate after releasing new versions, a fact that the company frequently touts in its press keynotes. That consistency makes things much easier on developers.

By contrast, Microsoft and Android present more complicated ecosystems. Android is highly fragmented, with a wide variety of OS version numbers and device capabilities, and with an increasing number of derivative operating systems gaining market share. And Microsoft has long faced difficulties getting people to transition away from older versions of Windows — largely because those older versions have finally become reliable enough to be trustworthy.

So all that brings us to this week’s launch.

Winning developers over will be critical, Shaw acknowledged, and Microsoft is not taking anything for granted. For instance, Microsoft promises that it will be easy to create universal Windows apps (apps that run on desktops PCs, tablets, smartphones, wearables like the upcoming HoloLens, or even embedded devices in an Internet-of-things environment). It is even offering “platform bridges” to help developers port iOS apps, Android apps, and even Web-based applications to the new environment. But the company knows it will have to prove that this is easy and worth doing.

“We have to deliver that,” Shaw said. “It’s not something we’re going to declare success on today or tomorrow — it’s something we’ll have to show.”

Microsoft also recognizes it missed the boat with the rush to smartphones. Its operating system was hailed by designers and loved by a loyal few, but never achieved widespread market penetration. Microsoft has lost this round in the battle for mobile users, and has probably lost the war as well.

But, Shaw said, companies that have missed one technological wave still have a chance. To bolster his case, he name-checked Apple: The company lost big in the PC war by betting on a proprietary system, while IBM licensed the PC platform to all comers and Microsoft achieved operating system dominance. But Apple managed to come back, first with its colorful Bondi-blue iMacs and then later with the iPod, the iPhone, and ultimately with a tremendous resurgence in laptop computers through its MacBooks and MacBook Airs.

Similarly, Microsoft might have a chance to catch the next wave.

In five years, Shaw said, the next big thing is not going to be a slab of glass and silicon that you hold in your hand. It could be a head-mounted augmented reality display like the HoloLens. It could be something totally different. I’d agree with that — and, assuming it doesn’t torpedo itself in the near future, Microsoft has as good a shot at winning the next big technological generation as anyone.

But first Microsoft has to win over a world that, in many quarters, has written the company off as an also-ran, a dinosaur from the last computing era.

The company is “cautiously optimistic” about its new strategy, Shaw said.

Humility — and with it, a chance for redemption.