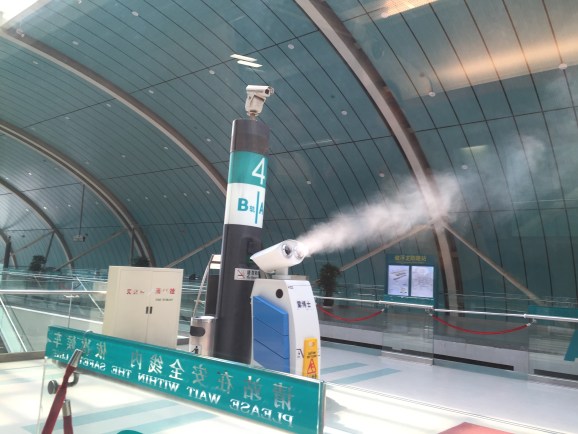 A cooling robot at the Shanghai Maglev station.

SHANGHAI — For the second time in my life, I rode Shanghai’s Maglev (magnetic levitation) train to the airport in just seven minutes and 20 seconds. It was such a cool, speedy experience taking the monorail-like train from mid-Shanghai to the Pudong Airport. Riding the train is like taking a step into the future, a place where technology works magically. At 268 miles per hour, it travels the 18 miles in such a short time that it feels like an island of technology. I had the same impression a year ago, but riding it again brought new impressions.

As I looked out the windows, the landscape whizzed by. We were going faster than the cars speeding on the freeway. But I could also see the poor neighborhoods of Shanghai, the places that the Chinese Government probably doesn’t want anyone to notice. The houses had decaying roofs. The grass was overgrown. The apartment buildings looked monolithic, uniform, and drab. By contrast, the view of the Shanghai New Expo Center, where the ChinaJoy game trade show took place, and which drew more than 250,000 people, was pristine.

About halfway through the journey, I saw another Maglev coming in the opposite direction. It zipped by in a split second. It’s like it was unwinding time. It’s not fair that the Maglev train doesn’t go on forever. One day, I hope it will. It would be so unfair if all that technology only got us an island that doesn’t make all that much difference to the rest of the landscape. China built the $1.3 billion Shanghai Maglev with a terminus in the Longyang Road station of the Shanghai Metro in 2004. And Shanghai has since added a four-hour, 800-mile Maglev train line from Shanghai to Beijing.

For the Shanghai airport line, each train carries 574 passengers, and one leaves every 15 minutes. If you miss your flight, it isn’t because the trains aren’t running on time.

Here’s a video in two parts of my trip. You’ll notice in part two, at the 1:55 mark, the other train, moving at 268 miles per hour in the opposite direction. It certainly made me feel like China was leaving us behind technologically. Everything in China seems that way, from the modern Pudong Airport to the skyscraper skyline. It’s no surprise that China won the 2022 Winter Olympics, since it has so many billions of dollars to throw at infrastructure.