It must be tough being a politician. Even as far back as 380 BCE, the Greek philosopher Plato remarked “those who are too smart to engage in politics are punished by being governed by those who are dumber.” The jokes — at each successive political candidate’s expense — haven’t stopped flowing since.

After 2,300 years of political commentary, you’re getting pretty good at it.

Like any good race to the White House, the current campaign has seen a slew of witty, sarcastic, and yes, sometimes hurtful social media comments, memes, and jokes, leveled squarely at the 21 main runners.

But which of these social media posts show a real hate for the politician in the virtual cross-hairs, and which suggest the author actually likes — even loves — the potential future POTUS?

We posed that question to Networked Insights, who measured 11,317,761 social media messages throughout July 2015, pushing each one through its natural language processing (NLP) engine. The results surprised even this cynical, sarcastic, well-weathered author.

But before we get to the results, let’s talk about how they were attained. I asked Whitney Kelly, analyst with the Customer Success Group at Networked Insights, to explain the technology.

“Networked Insights employs an extensive taxonomy of nearly 100 emotional classifiers, ranging from disgust to amusement to just about everything in between,” Kelly said. “Our tool, Kairos, runs every single post against every single emotion in our dictionary, and tags them appropriately. These emotions can be explicit — such as ‘I like Bernie Sanders.’ Or they can be implicit — ‘I prefer Bernie Sanders’ policies’ would imply that the poster likes (or even loves) Bernie Sanders.”

Of the almost 100 emotional classifiers being measured by its tool, we asked Networked Insights to focus its attention on two polar opposites; like/love and hate. But what about posts that just share stories about each candidate? If the attached headline for that article shows a level of love or hate for the candidate in question, wouldn’t that skew the results?

“Posts that simply include a link to an article are not flagged for emotions, because they are neutral in nature,” Kelly said.

NLP is becoming more important in the world of social listening, something I touched on recently in my study of social media management tools. While algorithms and searches make collecting mentions of a politician (or your company) easy, they don’t detect tone, and context. Without NLP, managers, marketers, and those who are responsible for measurement — regardless of whether you’re running a political campaign or a business — can have a skewed perception of their audience and brand health and performance.

So what do the results of your personal political commentary tell us?

First of all, as you can clearly see, you don’t really like/love or hate politicians nearly as much as you (or I) might expect. In fact, the average percentages on both sides of that particular emotional fence are 1.9 percent and 1 percent respectively.

That’s a surprise for me, despite the fact that we’re only measuring the two extremes of emotion.

And it turns out that, on average, you love politicians nearly twice as much as you hate them.

What is also very clear from the data is that Donald Trump is winning July’s Share of Voice Award (Donald couldn’t be here to accept his ‘Sovvy’ in person, but he said in a message that he’d like to thank his hair stylist). Of the 11.3 million messages involving candidates last month, he was mentioned in just over 5 million of them. Hillary Clinton and Bernie Sanders are the only other candidates to score a seven-figure message volume. 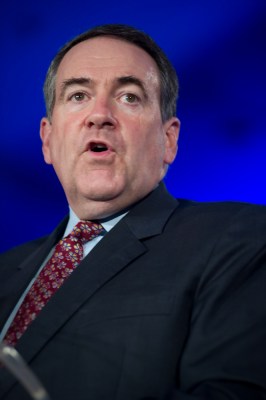 The politician you love the most (well, at least ‘like’ the most)? 4.4 percent of social media messages about Rick Santorum express high levels of affection, respect, and hugs towards the Republican originally from Virginia. Nobody else comes remotely close to that level of favor. Maybe it is his boyish good looks, or his love of sweater vests.

Either way, a good NLP solution does understand the difference between “I love Santorum” and “I love how crazy Santorum is,” before you wonder whether the results are realistic or not. Of course, the sample size for Santorum is smaller than Trump’s, so that will make a difference.

The person who has the highest percentage of hate being leveled at them? That is not Mr. Trump, according to the 11 million messages you have shared on social media in the 31 days of July. That award goes to Mike Huckabee, the Republican from Arkansas, or “the new Sarah Palin” as he was dubbed by Ed Kilgore recently.

But then, at least Mr. Huckabee is polarizing opinion. As P.T. Barnum once said, “There’s no such thing as bad publicity.” The worst possible position for any politician to be in, surely, is that where nobody is talking about you, and those who do speak your name show no real passion either way. Yes, I’m looking at you, Lincoln Chafee.

You can see the full results of the analysis below, but I’ll let Kelly have the final word on what she thinks of the some of the low message volumes reported (again, I’m looking at you, Chafee).

“We think that [the low volume] may be because we are still relatively early on in the election process,” Kelly said. “At this point, the data acts as a good benchmark of interest in the candidates in terms of social activity. It would be interesting to revisit this scorecard to see how the numbers change over time.” 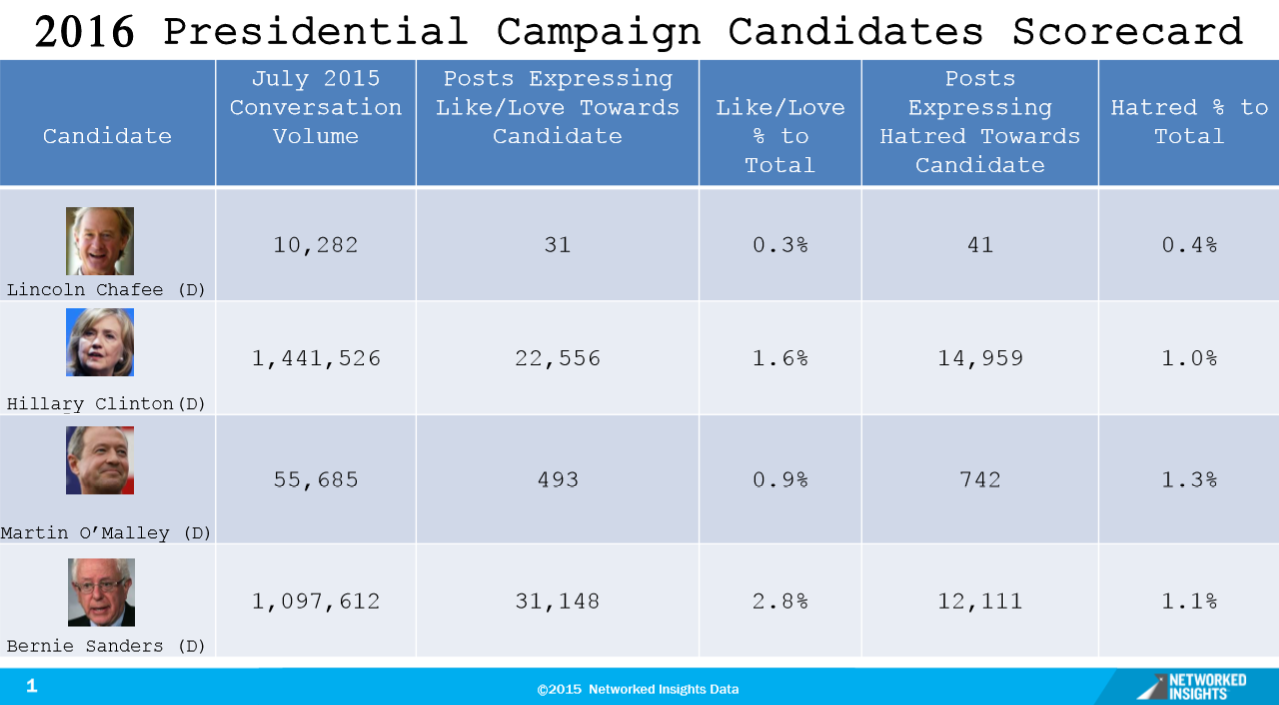 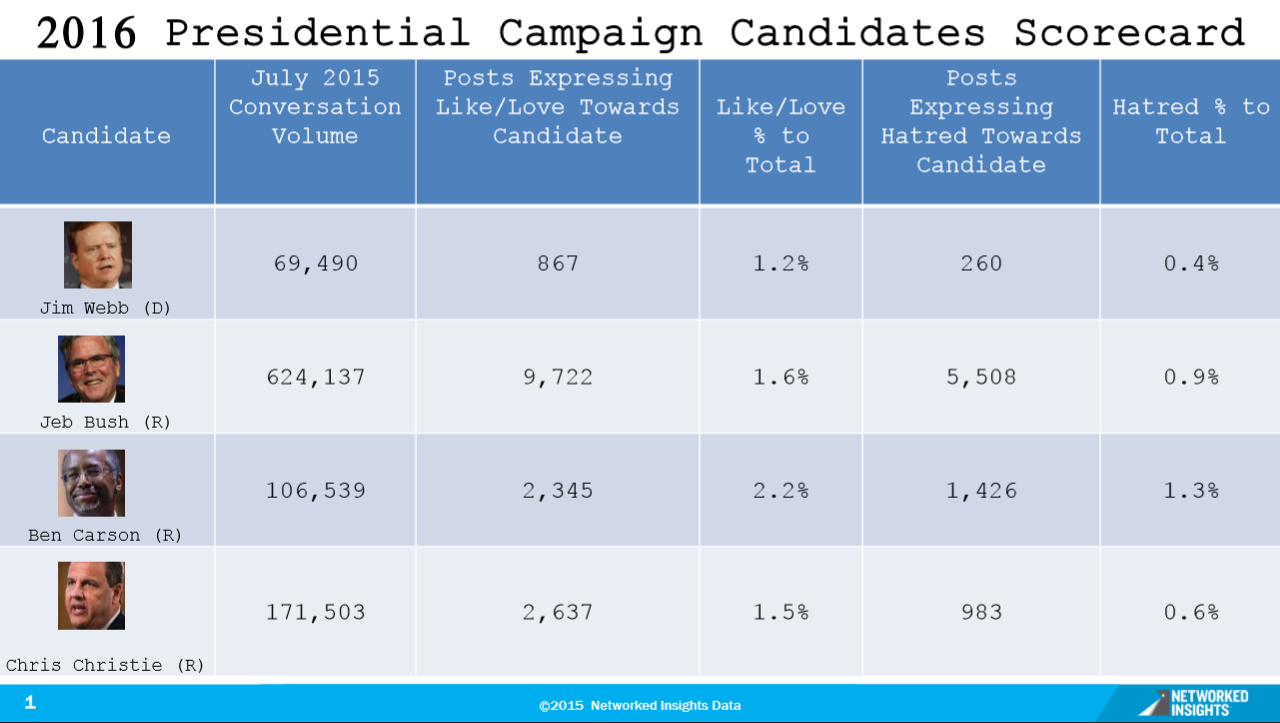 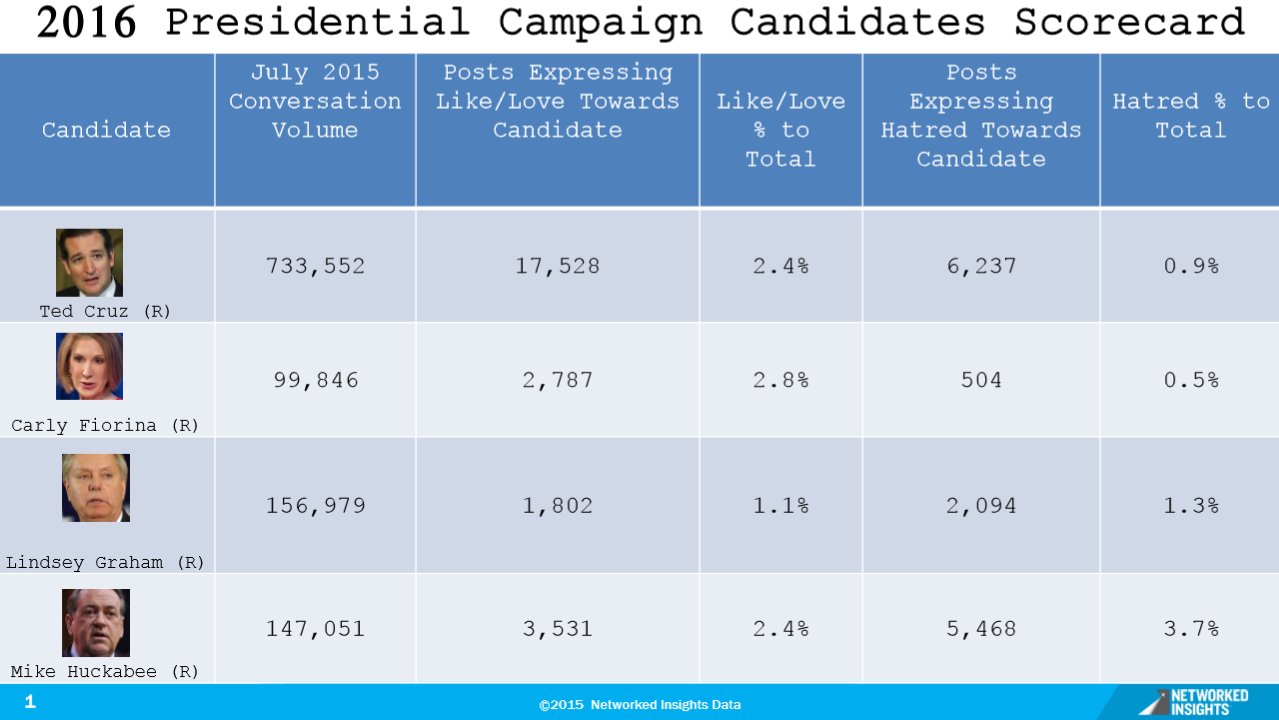 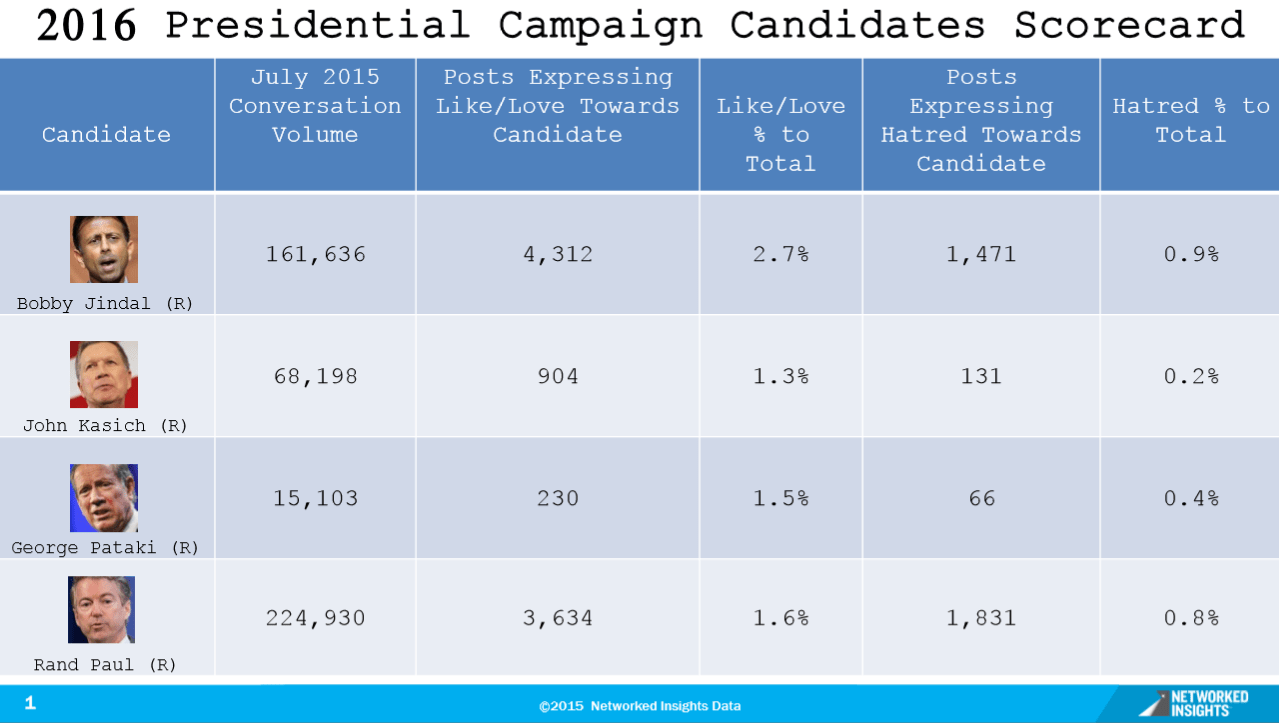 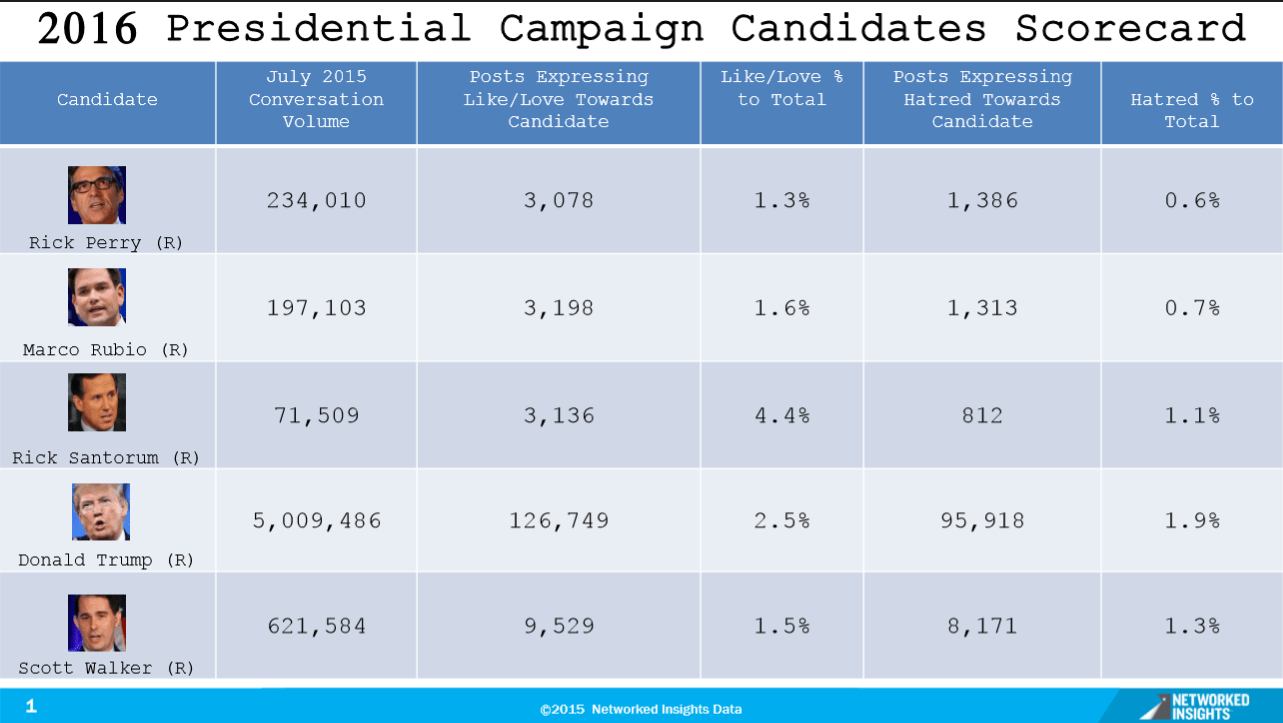