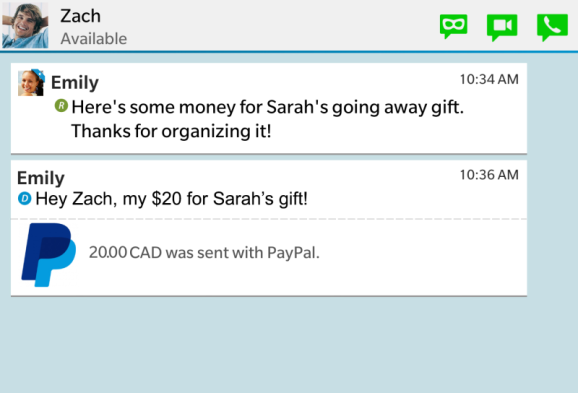 With digital payment apps popping up all over the place, it was only a matter of time before someone tackled payments for BlackBerry.

That someone is PayPal. Today, the two companies announced they’ve partnered on a project called BBM Money, which will allow BlackBerry Messenger users to instantly send and receive money. To send money, certain users can now select the new Pay with PayPal icon and connect their PayPal accounts to BBM. The beta project is currently only available to some users in Canada.

The beta test comes as a wave of hardware and software companies are rolling out their own payment solutions. Last year, Apple revealed an in-app and in-store tap-to-pay option called Apple Pay. Since then, Google has acquired payments app Softcard and created a payments division that builds on its original digital wallet; and Samsung has announced a competitor product called Samsung Pay that largely resembles Apple Pay. Even Facebook now has peer-to-peer payment functionality in its Messenger app.

PayPal has long been the go-to option for digital payments. The increasing competition has pushed PayPal to focus on the corners of the market that aren’t as saturated, like providing BlackBerry with payments functionality and working on backend payment processing through its acquisitions of Paydiant and Braintree. That strategy allows it to expand its business while continuing to compete with new rivals.