Over the past decade, Priceline.com has grown from struggling upstart to a key part of the world’s largest travel company. The parent company, known as the Priceline Group, is valued at $68 billion, more than mainstay Internet companies like eBay, Yahoo, or Netflix.

John Caine is the chief product officer of Priceline.com. As Caine tells it, the company’s growth is rooted in its culture: Priceline.com has remained a perpetual startup. It breaks product teams into small, autonomous units, which build nimbly and test and iterate. And it’s often small ideas that lead to growth spurts, like improving the existing experience through tiny wins — tweaking things like colors, wording, and arrangements of data on the web page just to get incremental lifts. 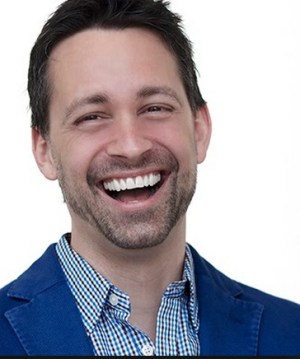 How a single word change leads to 2 percent life

In one example, Caine said, Priceline.com found that changing the wording in a description of one of its properties to “free parking” from just “parking” created a 2 percent improvement in conversion — even though it was on an obscure portion of the page and was hardly noticeable by the average reader. “It would take you 20 minutes to see the difference,” he said.

It’s this excruciating focus on the product that Caine says is Priceline.com’s strongest marketing strategy. The company takes for granted that the travel industry is hyper-competitive, because shoppers surf endlessly to find the best deal and customers can be fickle. So it can’t necessarily win by boosting overall traffic. Rather, it spends considerable time looking for tiny ways to improve the conversion rate of that traffic, or getting visitors to actually click through to purchase. And while the Priceline Group has several properties — which include Booking.com, Kayak, Agoda.com, Rentalcars.com, and OpenTable — each operate with a common structure that enables them to adopt their own versions of company-wide initiatives, such as being mobile-first.

Priceline.com’s Caine is speaking at our GrowthBeat conference next week about how to achieve superior growth by focusing on the customer journey.

Born during the dot-com era of the late 1990s, Priceline.com took a hit when the Internet bubble burst. The stock crumbled to a fraction of its previous worth and struggled for several years. But the company bobbed and weaved, first scrambling to go international, and then moving quickly to adapt to the mobile revolution in 2011. In 2013, Priceline.com’s front man, William Shatner was joined by Kaley Cuoco-Sweeting, and everything they did in commercials included a cellphone.

For the past seven years, the Priceline Group could do no wrong. The stock has climbed steadily up and to the right, in one of the strongest comeback stories on the market. (The stock has paused for the past year, resting near its high, in part because of its exposure in Europe, where economies have been hit hard by sluggish economies. Priceline Group gets the overwhelming majority of its business abroad through its businesses such as Booking.com and Agoda.com. North America-based Priceline.com makes up only about 10 percent of its revenue.)

So Priceline.com’s Caine is just one of the guys behind the growth magic. After a stint at Priceline.com in 1999-2000, he returned to the company eight years ago, and he has played a role in much of the property’s marketing and product strategy. 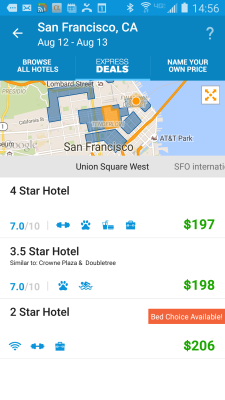 Priceline.com is focusing on the mobile experience, and there it wants to give you a personal experience, tailored to your specific interests. In one example, Priceline.com offers you deals based on your location [see right]. Open the app and it maps the area around you. You can pan the map to see offers based on the area of the map you’re looking at. When hotels have excess inventory, they work with Priceline.com to give you special rates in order to hit their occupancy goals. Priceline.com hides the name of the hotel while they offer the deal, so it isn’t being forced to publicly reveal it’s low rates before it needs to. This “opacity” is what allows Priceline to make such good offers.

However, Caine admits this contradicts what customers want, which is as much information as possible about the deals. But Priceline.com seeks to bridge that divide when possible. For instance, Priceline may get permission from a hotel to expose its name early in cases of Tonight-Only mobile deals after a certain time.

For now, Priceline.com doesn’t pay too much attention to signals you might send through social media. Social doesn’t work as well for travel, Caine said, because the signals sent by social channels are more diffuse. “Everyone loves travel, but if you tweet “I love Boston,” it doesn’t mean you want to go to Boston.”

Rather, Priceline.com sees to acquire users by advertising through Google, or some other search or travel-related engine, such as Bing, TripAdvisor, or even Kayak.com, which is part of the Priceline Group.
And with each subsequent click, Priceline.com collects more information about me from the signals those clicks imply. If I look at an expensive property and then click back to a less expensive property, Priceline infers that I’m price-conscience or that I’m looking for something in certain price range. Over time, it collects more information about me, and can make me more effective and customized offers.

Priceline has tended to build much of its marketing technology stack itself, because it can customize that technology to allow it to go deeper in its core areas of interest than most technology providers offer.

Join us at 1:50 p.m. on August 17 when I interview John Caine at GrowthBeat about the details of Priceline.com’s success.