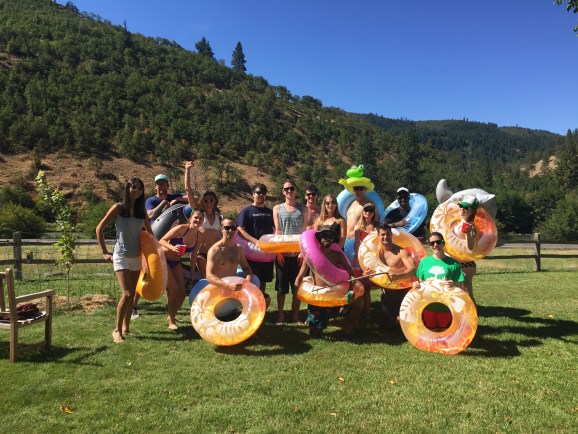 InDinero's San Francisco team on a recent camping trip. Founder Jessica Mah is on the left.

Jessica Mah has been starting companies since she was 13. As a teenager, she built websites for small businesses, and then created a company that managed online services for companies. It was pulling in $100,000 in revenue before she was even in high school, Mah said.

So after finishing an undergraduate degree in computer science at U.C. Berkeley, Mah did what came naturally to her: She started another company. She and cofounder Andy Su decided to tackle an area they knew well: providing services to companies.

The initial idea was to build a “Mint for businesses” — a simple Web dashboard that companies could use to keep an eye on their financials.

“We figured if we could figure out this whole computer science thing, then accounting would be a piece of cake,” Mah said.

On the strength of that pitch, Mah and her cofounders got into Y Combinator, then raised $1.2 million in 2010.

But after that, it didn’t go so well.

“The million dollars burned away. We basically threw that money in a fire,” Mah told me.

With the company down to $150,000 in the bank, the founders had to make a tough call. They laid off everyone except for Mah, Su, and one other person. Personal relationships frayed. Mah and Su even went into couples therapy (though their relationship is platonic) in order to learn how to work together more effectively.

The trio then got to work on reinventing the company from the ground up. Five years later, it now provides a complete back-office solution for businesses, each of which pays it thousands of dollars in fees to eliminate all their headaches with payroll, accounting, and taxes.

Today InDinero has 125 employees, and closed a $7 million round about six months ago. And it’s not just VC money fueling the company’s growth: InDinero landed on Inc.‘s list of the 5,000 fastest-growing companies thanks to an impressive 3-year growth rate of 2,685.6 percent.

But how the company operates is one of the most interesting things about InDinero. Like a handful of other tech companies, it has adopted an approach to management that gives far more power, autonomy, and respect to its employees than traditional companies would.

For some companies, that has meant giving employees unlimited vacation time, like Hubspot does, or unlimited paid maternity or paternity leave, like Netflix recently announced.

For other companies, it goes deeper. Zappos, for instance, has adopted a completely decentralized approach to management called “Holacracy.” Zappos founder Tony Hsieh even recently required all of the company’s employees to sign on to Holacracy (or leave the company, which 210 of them did), and he asked them to read a book on self-management called Reinventing Organizations. (I’ve read it: It’s a little weird, but is also quite eye-opening about how many different kinds of companies around the world have successfully tried this approach.) San Francisco-based content platform Medium also has adopted Holacracy. And Seattle-based game studio Valve takes a similar approach, eschewing titles and management structure altogether.

InDinero’s take on self-management incorporates many aspects of Holacracy and self-management, but still retains an executive management structure. The executive team sets the company’s overall goals and lays the framework, but employees make all other decisions collaboratively.

And interestingly, the employees rely heavily on modern communications tools like Slack and Trello (as well as more traditional mainstays like Salesforce) in order to keep everything coordinated. Trello, in particular, seems to be a constant point of reference.

InDinero calls it “entre-ocracy,” which is probably too awkward of a term to ever catch on. But the principles are fascinating to watch in action. I attended a weekly sales meeting recently, which was run by a sales rep who acted as the moderator and facilitator for the discussion. The executive ostensibly in charge of the team, InDinero’s director of sales, was part of the meeting, but he didn’t identify himself as an executive to me beforehand, and I wasn’t able to figure out during the course of the meeting who was actually the boss. The sales director got no special treatment in the discussions — and in fact, there were times when the rest of the team overruled his suggestions as impractical or incomplete.

During the course of the meeting, team members referred repeatedly to Trello cards that listed things they needed to discuss, and as they agreed on solutions they updated those cards with follow-up actions and who was responsible for following up. They weren’t making trivial decisions, either: One of the big agenda items was how much to pay current customers for referring new customers to InDinero, a decision that put a decent amount of money in play and could have a substantial impact on the company’s revenues.

InDinero even extends collaborative decisionmaking to things like figuring out who deserves a promotion and how much people in various roles should be paid. Everyone’s performance is evaluated quantitatively, and is publicly known to everyone else on their team, so Mah says such decisions are very straightforward and uncontroversial.

More significantly, perhaps, this approach has allowed the company to eliminate middle management entirely, and it has freed up Mah and other members of the executive team to focus on really strategic things, rather than distractions like approving vacation requests or figuring out how much to allot to the travel budget for next quarter.

“We’re taking the decisionmaking out of management,” Mah said. “Our job is to facilitate the structure, not to make all those decisions.”

I asked Mah, who is now 25 years old, if she got any resistance from the InDinero board. After all, as anyone who has ever held a job could tell you, executives and board members are often extremely resistant to any notion of employee empowerment. She didn’t, she said — though the corporate structure of InDinero is such that she has considerably more autonomy than most entrepreneurs, since all of her board members are advisory, not voting board members.

“In short, they really don’t mind,” Mah said. “But a lot of boards probably would be like ‘what the hell?’”

With nearly 3,000 percent growth over three years, however, most board members with any sense would probably tell Mah to keep doing exactly what she’s doing.

InDinero’s approach to “entre-ocracy” probably isn’t going to work for most tech companies. It seems clear that it comes from the founders’ unusually high level of emotional and interpersonal skill (maybe that couples counseling really does work!). And it requires employees who are eager to take on a higher level of responsibility.

But for the right entrepreneurs and the right companies, this could be an incredibly powerful way to remain focused on what really matters, even while the company is growing — and it could be a great way to recruit, empower, and retain the most talented people.