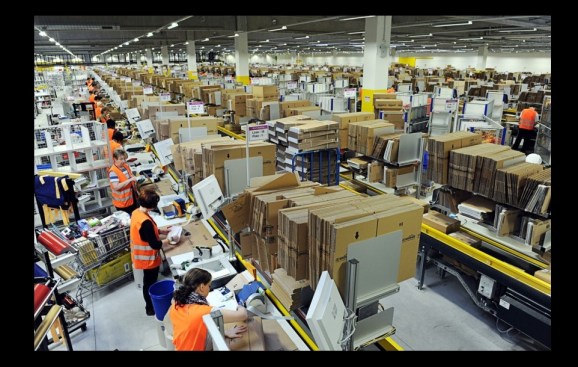 Inside an Amazon warehouse

CEOs of fast-growing companies face a special challenge today: They need to set the tone for a positive and productive culture that’s in line with what employees want. But as the company grows, lines of communication break down, and it’s easy to lose touch with the daily experience of employees. As a result, a big disconnect develops between the culture that the CEO thinks employees want and what employees actually want and need from their workplace and managers.

We’re seeing a perfect example of this type of disconnect happening currently at Amazon, whose high-achieving, highly demanding workplace culture was recently the subject of a highly controversial New York Times article. Amazon’s defenders say that the company is tough but fair – that the culture needs to be “friendly but intense” to generate great ideas and improve the customer experience while holding people accountable for performance. Meanwhile, Amazon CEO Jeff Bezos said the extremely harsh management practices described in the article were “shockingly callous,” did not represent the Amazon that he knew, and that he wanted Amazon employees to let him know directly if they were seeing unfair practices happen in their workplace. That’s a good response, but it’s even better if you can prevent your company’s internal lines of communication from breaking down in the first place.

When so many former employees are willing to speak on the record about their bad experiences, that’s a sign the company has a disconnect between what the higher-ranking executives think their culture is about and how that culture is actually being implemented and experienced by employees. The same culture that Amazon’s executives think is tough but fair, or “friendly but intense,” is being widely perceived by employees as harsh and punishing – to the point that Amazon is getting terrible publicity from it.

Use the Latest Technology to Break Down Walls

Lots of companies pride themselves on having an “open door policy,” but as a company grows to multiple locations and countries, an “open door policy” becomes increasingly difficult to put into practice. Leveraging technology through internal communication software, like Slack, can help bridge the gap between CEOs and frontline employees. Knowing that your CEO is instantly reachable via Slack message gives you an additional communication channel that can be more accessible than email. Also, it may not seem like a lot, but even getting a “thumbs up” emoji from the CEO goes a long way in encouraging entry level salespeople.

Employee engagement surveys are another popular tool for tracking employee attitudes – and there is a new cloud-based platform called Glint that offers real-time employee engagement surveys and an interactive dashboard to pinpoint issues and compare data vs. industry benchmarks and internal averages. With the right technology, it’s easier to maintain ongoing communication – and keep track of whether employees are happy – at all levels of even the largest organizations.

Hiring for cultural fit is an often mysterious and misunderstood process, but if you can hire the right people based on the right cultural factors – and manage their expectations accordingly – you can significantly reduce turnover and even save money on compensation. Studies cited by Monster found that “departments whose environments aligned with the company’s stated cultural goals had 30 percent less turnover,” and that college students would be willing to accept a 7 percent lower starting salary to work for companies “with cultures they value and appreciate.”

How can you best hire for cultural fit? There are a few strategies to consider. One example cited in the Harvard Business Review is to have multiple people on the team participate in the hiring process – for example, the world’s best-respected professional firms tend to have 8-20 people interview each job candidate. Another idea is to create a customized “cultural fit” questionnaire that you can use with each job candidate, and ask detailed questions to drill down into what really makes them want to work with you, what their goals and ambitions are for the future, and how their personalities and preferred work style will fit into your company. Ideally, over time, you can develop a consistent, data-driven way to figure out which candidates are most likely to succeed based on cultural fit.

Monthly town hall meetings are worth the effort because they allow the CEO to get a spot check on the company as a whole. New company initiatives are typically better received if they come directly from the CEO as opposed to a mass email or memo. We’ve also found that the best way to execute these meetings is to use video conferencing services such as HighFive or On24. Using streaming video to broadcast your company messages allows CEOs to build a more genuine connection with your employees – the CEO seems more “real” and personable if employees can see you speaking to them live onscreen on a regular basis.

The competition for top talent in the tech world is far too fierce today to afford to lose people due to misunderstandings or to bad cultural fit. It’s more cost effective to achieve lower turnover by hiring smarter in the first place. Smarter hiring processes are cheaper and easier than tumultuous, expensive “churn and burn.” If you hire more of the right people who are the right cultural fit – and maintain that culture fairly and consistently with open communication throughout the company – you’ll have higher retention rates, lower turnover costs, and less risk of unhappy former employees talking to reporters.