Jason Cohen wanted to help microbrewers craft a better batch of beer. So he created an app, and then he got it to run three times faster using a graphics processing unit (GPU), or graphics chip. 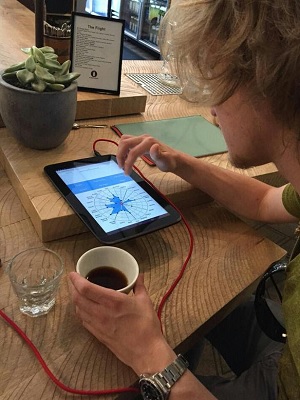 But Cohen is a data scientist and fan of microbreweries, which are surging in popularity across the country, accounting for 19 percent of the industry’s $101.5 billion in sales, according to the Brewers Association.

But the entrepreneur in State College, Pennsylvania, was annoyed that beer batches didn’t always turn out the way he wanted. His story shows how a random problem — which has nothing to do with technology — can be solved by big data analysis and the latest computing tech.

So he created a program, Gastrograph, that can find flaws in a beer with just a handful of tastings. The app allows tasters to fill out their impressions of 24 different flavor characteristics, Cohen said in an interview with VentureBeat.

“Everyone likes to believe they are an individual snowflake and everything tastes differently,” Cohen said. “When we model the artificial intelligence, we model a physiological responses to an underlying stimuli. The taste doesn’t change. But their perception of it does. So we identified 24 flavor attributes that are independpent of age, sex, race, and past tasting experiences.”

The app sends the data to a data center where the company applies its artificial intelligence and machine-learning algorithms. Then it provides data to a dashboard. Customers can log in and see their results in real time.

Running it on Nvidia’s GPUs returned the analysis three times faster. That’s critical when a beer maker is deciding whether to put beer crates on a truck or not.

Cohen has some customers lined up, and he is working on raising his first round of venture funding. The microbrewery industry has grown to around 3,000 brewers.

“Most microbreweries have more variation than they want to admit,” Cohen. “That’s bad for the industry.”

Cohen’s parents were connoisseurs of fine olive oil, and he inherited their eclectic tastes for fine food. He was professional tea taster before moving from Florida to Penn State, where he studied political science.

At Penn State, he founded Penn State’s Tea Institute, now one of the worldʼs leading authorities on tea and tea culture. To try to improve tea, he had to beg college students to slurp tea and record their impressions. That wasn’t easy.

So he turned to offering free beer. The volunteers came in droves. Within weeks, Cohen had a trove of data, and he used it to figure out what was wrong. He found that beer that tastes like fresh-cut grass has too much of a compound, cis-3-Hexen-1-ol. And that comes up when the hops are stale.

Cohen said that his data lets him tease out 20 common flaws in a beer with just a handful of tastings. To speed up the analysis, Cohen and his team of 11 employees tapped Amazon’s GPU-based servers. The software is now able to identify dozens of beer styles in seconds, rather than minutes. It’s also able to detect bad beer.

Cohen’s company, Analytical Flavor Systems, has 11 employees. His first customer that he can identify is Otto’s Pub and Brewery in Pennsylvania. Cohen said that eventually the company has plans for a consumer review app.