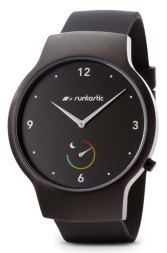 With the Runtastic Moment, the company aims to bring to market an attractive watch that marries the needs of both fashionistas and fitness freaks.

The wearable comes in four flavors across two price points, though there are 10 variations when you factor in colors. All incarnations have stainless steel casing and scratch-resistant glass, and measure either 37mm or 46mm in diameter.

The $130 Runtastic Moment Fun sports a silicon strap, and is available in four colors — raspberry, plum, sand, and indigo. For the same price, Runtastic Moment Basic has a larger display, and comes in two extra colors — beige and black. 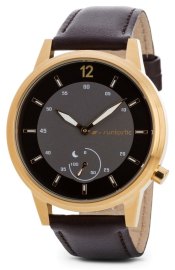 Then there’s the $180 Runtastic Moment Elite, which is designed for a “classier” look, and includes a black leather band. The Runtastic Moment Classic is also $180, but offers a cleaner, simpler look and three additional colors — silver, gold, and “rose gold.”

All versions of the watch have analog faces, but can still track and display steps, distance, active minutes, calories burned, and sleep cycles. The main hands show minutes and hours, but the smaller dial shows 0-100% progress, which can track whatever goal a user sets through the mobile app.

There’s a gamification element, whereby users can set and beat personal bests. Vibration alerts can also be set to action after periods of inactivity. And crucially, the devices are fully waterproof up to 300 feet, meaning this is aimed at everyone — from walkers and runners to swimmers and beyond.

In terms of its inner workings, the watch runs on a standard non-chargeable battery, which supposedly lasts for “up to” six months.

Though Runtastic is better known for its RunKeeper-style GPS fitness tracking app, it offers a range of spin-off apps too, including apps for improving your sleep, working out at home, and building six-packs. Across all apps, the company has notched up 140 million downloads around the world, and claims 70 million registered users. 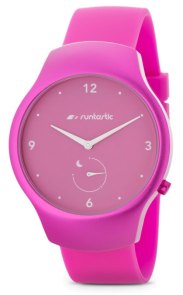 Today’s news comes almost a month to the day since the Austria-based startup revealed it was hooking up with one of the world’s biggest sports brands, though the company maintains it will stay independent, both physically and in spirit.

The timing of today’s launch is notable due to the proximity of the Adidas acquisition, though obviously Runtastic has been working on the timepiece for far longer than a month, so this can’t be viewed as the first fruits of that multimillion dollar deal.

The Runtastic Moment is far from the brand’s first foray into hardware — it has offered fitness-tracking wristbands, scales, heart-rate monitors, GPS watches, and smartphone mounts for bikes for some time. Indeed, Runtastic launched its assault on the mainstream wearables market last July with the Orbit, a Fitbit-style wristband that connects with a dedicated app (Runtastic Me).

With the Runtastic Moment, the company is bringing the concept of the Orbit to a more traditional timepiece that someone might actually want to wear on a day-to-day basis.

“What we saw at CES (Consumer Electronics Show, Las Vegas) in January, was around 56 companies launching a wearable,” explained Runtastic CEO Florian Gschwandtner in an interview with VentureBeat. “This means the market is kind of flooded. Fitbit is doing a very good job in being the dominant player. Here in Europe we did quite well with the Orbit, but at the end of the day, it all comes down to the same challenges with wearables — they don’t look super stylish, you have to charge them often, and ultimately people stop using them.” 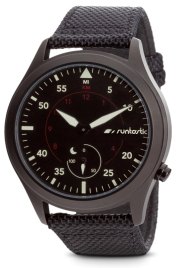 And it was this that heralded the launch of Runtastic Moment – a device that looks better, and manages to combine technology and fashion. It’s a fully mechanical watch that uses Bluetooth LE (low energy) to connect the contraption with the Runtastic ecosystem.

It’s worth noting here that while the watch can also connect with the main Runtastic running app, it probably isn’t aimed at serious runners. It can’t show multiple metrics at once, as the Pebble smartwatch can when you connect the Runtastic app. The Pebble Moment feels like it’s geared towards day-to-day activity tracking. “We’re eager to connect with individuals who prioritize ease of use with convenience and style,” said Gschwandtner.

Though you will need a mobile phone to sync up your data over the long-term, the watch itself stores seven days’ worth of data, so you can wander freely for a week without access to your phone.

VentureBeat will be reviewing one of these devices, and will be putting the watch through its paces shortly. Meanwhile, the watch is on sale now in the Runtastic online shop, and will be hitting offline retailers “in the near future.”