Whether or not this presidential election will be one for the history books, its digital marketing will be.

That’s according to Jonathan Lacoste, cofounder and president of Boston-based Jebbit. His “post-click engagement” firm, launched in 2012, is using its experience of working with brands to help out presidential candidates.

The company has analyzed the digital identities of all 22 candidates — 5 Democrats, 17 Republicans — including websites, email signups, and their social channels. It has also looked at archived political websites and screenshots, and digital spending patterns, from 2008 and 2012.

The primary reason for the research was to inform the company’s current work for two unnamed Republican candidates (one of whom, Lacoste indirectly indicated, is Carly Fiorina) and two Democrats. (Unlike some firms that tilt this way or that politically, Jebbit is willing to work with anyone.) But Lacoste also confesses to “being something of a political junkie.”

He says that 2016 could be as transformational for political digital marketing as 2008 was, when Barack Obama’s campaign was the first to use social channels in a big way.

Back then, Lacoste pointed out, it was possible to spread the word organically — that is, by sharing through interested users — on Facebook. Now, that social giant has tightened its News Feed algorithm to such an extent that political marketers need to pay to reach a wide audience.

One difference between the two elections, though, was that Instagram was launched in 2010. And Lacoste noted that Obama continued to lead in social media in the 2012 election, employing it nearly seven times as frequently as Mitt Romney’s campaign.

But in this cycle, as with everything in this billionaire-fueled election, the budget has boomed. One report estimates that total digital campaign spending could easily exceed a billion dollars.

And social media has now grown up into a widely used political channel. Lacoste pointed to Republican Rand Paul as being “the most active candidate on Instagram,” as well as livestreaming on Periscope and running ads on Snapchat.

Paul’s campaign also released a mobile app earlier this week. Other campaigns haven’t yet done so, he said, although “Hillary is working on something big.”

Donald Trump, who is spending as little money as possible while his appearances are broadcast live by cable networks, is the most prolific tweeter. In fact, it appears that all of Trump’s tweets are actually from his own thumbs, not a staffer’s.

One difference from 2012 was that, back then, social media was where most of the frequently changing content lived. Now, Lacoste said, it’s moving into websites.

Sites are offering “more of a news feed experience,” Lacoste told me, with frequent news updates. In some cases, they feature curated tweets geared to what’s most widely shared on social networks. 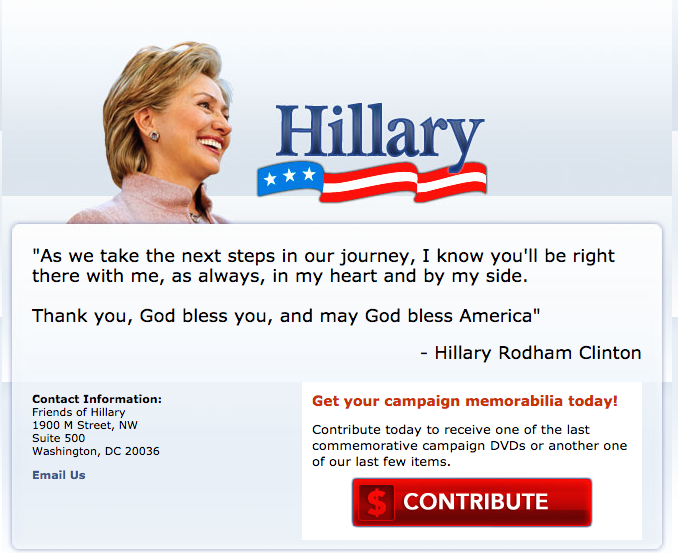 Above: Hillary Clinton’s homepage for the 2008 election. 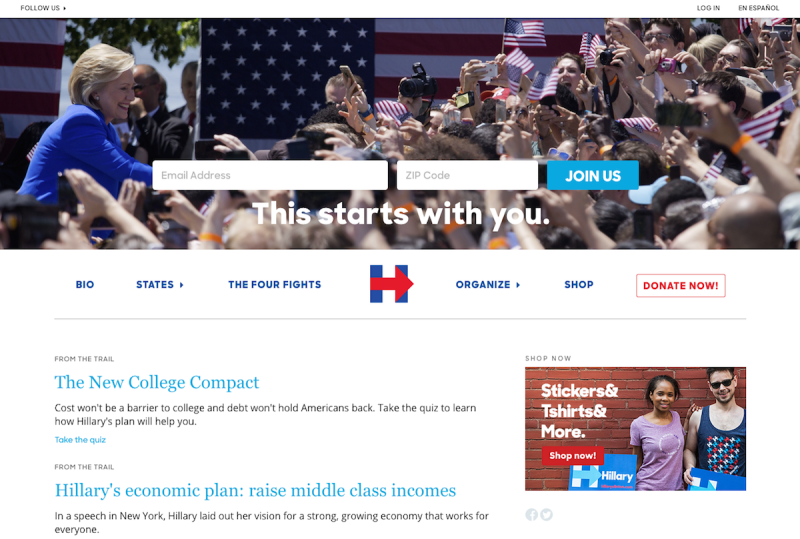 Above: Hillary Clinton’s homepage for the 2016 race, with content updates. 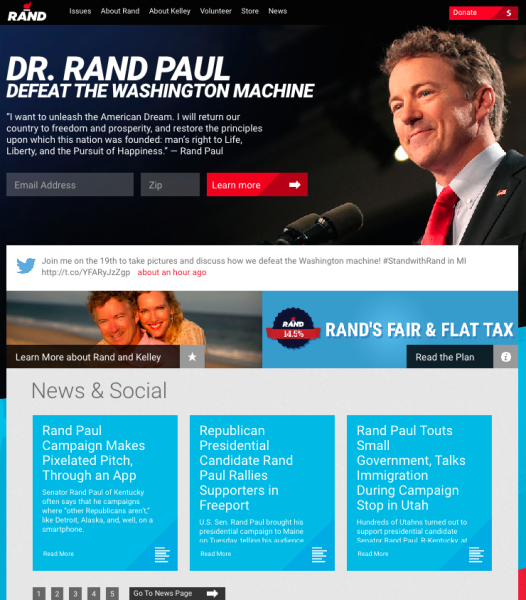 Above: Rand Paul’s website, with tweets in the middle of the page. 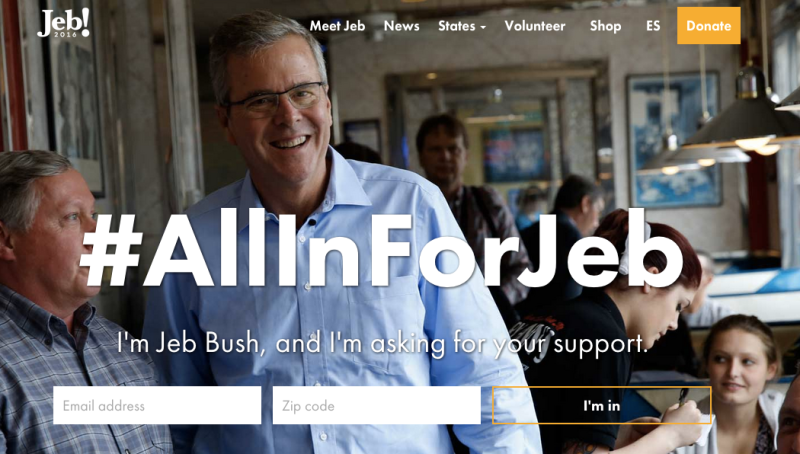 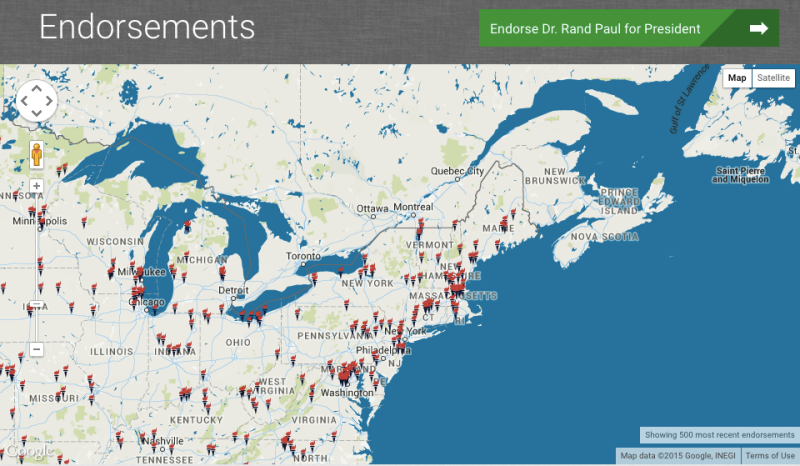 Lacoste also pointed to the increased use of campaign-related video in social feeds on Facebook and Twitter and on YouTube, propelled in part by the wider availability of high-speed connections. He noted that candidates like Clinton and Bush have discovered live video streaming via Periscope or Meerkat, while Rand Paul has used Snapchat video.

But the biggest difference between this cycle and the last two is that, as with many brands, the website is no longer the center ring. Previously, Lacoste said, you “needed a nicely designed website” as the defining digital feature, but now you need to be mobile-first.

One result, he said, is that website designs are visually flatter and there is less use of video on the homepage, as campaigns try to responsively use the same site designs on desktop and on mobile web.

What’s more important now than a website, according to Lacoste: “the distribution strategy.” This determines how campaign content will get out to social channels, email lists, and search engines. Campaigns are also discovering sponsored posts, he said.

One kind of content distribution is offered by Lacoste’s company. A Jebbit-ized campaign website is intended to help first-time visitors learn about the candidate, and vice versa.

For instance, on Carly Fiorina’s site, site visitors are asked to answer a few questions, often for a small reward, and their answers result in immediately loaded, related content.

It’s a kind of personalization, Lacoste acknowledged, except that targeted content will appear immediately after you answer. It also customizes donation pitches, based on where the visitor came from. Visitors coming from emailed links, he said, tend to be more donation-susceptible, while visitors from social media are more responsive to content.

His company claims that its techniques have generated a 40 percent increase in deductions and a 60 percent bump in email address captures, compared to a regular site.

While digital communications can be a boon for a campaign’s messaging, do any of the new techniques have an impact on … you know … democracy?

“What’s more powerful in 2016 than in 2012,” Lacoste said, “is backlash on Twitter.” He pointed to tweetstorms prompted by Trump’s insults to reporter Megyn Kelly, Jeb Bush’s endorsement of his brother’s Iraq War, or Marco Rubio’s insistence that there should be no exceptions for abortion, even for rape or incest.

This greater impact, he said, is likely a result of wider participation on Twitter.

“In 2012, I was on Twitter but my parents and grandparents weren’t,” he said.

And now they are.