As Apple prepares to open up its mobile Safari browser to ad blocking in the forthcoming iOS 9 release, Adblock Plus is seeking a head start. The popular ad-blocking tool is arriving on Apple’s mobile platform for the first time.

Powered by the Adblock Plus software, Adblock Browser is optimized for iPhones and iPads, and as its name suggests, doesn’t focus on blocking in-app ads — it’s a standalone browser designed to block advertisements on the mobile web. 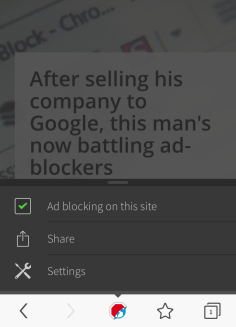 Above: Adblock Plus for iOS

Eyeo, the Germany-based company behind the Adblock Plus software, said the app is built upon the Kitt browser, an extensible iOS platform that makes it easy for developers to build customized browsers.

The Adblock Browser will only block what it deems to be “annoying ads,” while nonintrusive ones are displayed by default — though you can opt out of seeing these too.

Today also sees the official (re)launch of the Firefox-based Adblock Plus browser for Android, four months after it was introduced in beta. There was actually another version for Android way back in 2013, but Google kicked that out of the Google Play store as its focus was on in-app ads. You can still install that app manually by “side-loading” it.

As for the timing of the iOS launch, what with Apple expected to officially lift the lid on iOS 9 and its ad-blocking Safari extensions tomorrow, we’re told that this is all a coincidence.

“We’ve been developing Adblock Browser for months, long before Apple made the announcement about iOS 9,” a company spokesperson told VentureBeat.

In addition to the new Adblock Browser app, Eyeo said it will also have a solution that uses Apple’s new tools for blocking ads in Safari. But it stopped short of saying what this will be, exactly.

Ad blocking has emerged as a controversial practice in the media realm, with advertisers paying to be positioned alongside content — with no guarantee that the ads will be viewed by everyone. However, it’s not illegal, and a number of high-profile cases brought against Adblock Plus and its owners in recent times support that assertion.