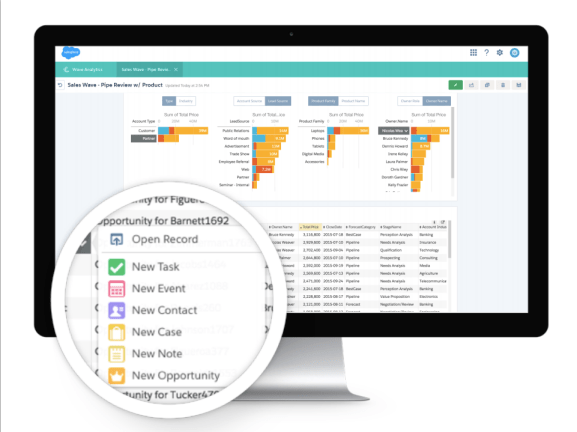 Salesforce today announced new capabilities for its Analytics Cloud, a cloud-based business intelligence tool that Salesforce launched almost a year ago. It’s becoming possible to embed dashboards from the Analytics Cloud into other parts of Salesforce, and new Wave Actions allow salespeople to take action on dashboards based on what they see.

That’s a sensible next step for the Analytics Cloud. Sales Cloud is already popular among sales teams, and Salesforce is effectively making Analytics Cloud more of a starting point for sales work rather than a standalone BI application. From Salesforce’s statement on the news:

Companies are able to create a menu of custom Wave Actions—such as create a case, update an account or assign a task. And because Wave is natively integrated with App Cloud, Wave Actions are automatically pushed from Wave into the corresponding Salesforce record. For example, when a sales manager drills into her custom Wave Analytics App and discovers a customer attrition pattern within specific accounts, she can instantly assign a task to a rep directly from the app, addressing the problem from the point of insight.

Salesforce today is also announcing a revamp of Analytics Cloud’s user interface for creating reports and dashboards, bringing it in line with the Lightning Experience design that was first rolled out for Salesforce’s Sales Cloud.

Salesforce is also releasing new data about the use of the Analytics Cloud inside of other companies’ services. Now there are more than 80 companies in the Analytics Cloud’s partner ecosystem. At Salesforce’s Dreamforce conference in San Francisco this week, 13 software companies, including Apttus, FinancialForce, SteelBrick, and Vlocity, will unveil new apps based on Analytics Cloud.

While Salesforce is making Analytics Cloud more clearly connected to Sales Cloud, it’s truthfully a piece of software that diversifies Salesforce — as was the case with the Heroku platform-as-a-service (now a component of Salesforce’s new App Cloud), its marketing automation tools, and its service desk.

In the BI world, Salesforce competes with many entities, including IBM, Microsoft, Tableau, Qlik, Birst, GoodData, Domo, and MicroStrategy. Even with information about the partner traction, it’s difficult to say how widely adopted Analytics Cloud has been so far or to acurately predict future adoption.

“Subscription and support revenues from Analytics Cloud … were not significant for the three and six months ended July 31, 2015,” Salesforce said in its most recent earnings statement. But Salesforce is clearly trying to make Analytics Cloud relevant to its bread-and-butter Sales Cloud customers, and over time it could become a higher priority for the San Francisco-based company.