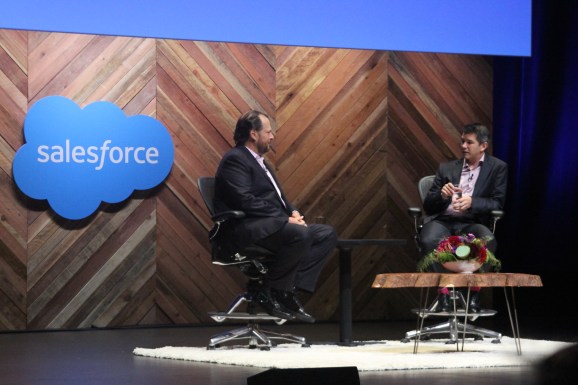 SAN FRANCISCO — Travis Kalanick says that UberPool isn’t as profitable as the rest of his company’s offering, but he’s not worried about it because it’s all about inducing carpooling in all the cities it operates in.

Speaking with Salesforce chief executive Marc Benioff as part of the Dreamforce conference, the well coached Uber CEO said that over 100,000 people in all of its markets are carpooling every week. “That’s exciting,” he said. “That’s two cars becoming one.”

“If you were to boil down our product strategy, it would come down to three things: convenience, affordability, and a certain amount of magic,” Kalanick explained. “UberPool tries to hold convenience at the same level as the rest of Uber.”

He shared that on average, there are “thousands of rides a minute” on Uber. In addition, 50 percent of drivers this week are driving less than 10 hours.

Kalanick’s talk today comes as his company has been plagued by legal woes, including a class-action lawsuit brought against it by drivers, and yet none of the questions particularly pertained to these issues, nor were there any protests — overall it was a contained scene where the only person asking questions was Benioff.

Through the one-hour conversation, Kalanick appeared very polished and not as brash as some have viewed him before. From this appearance, it would seem that the company is looking to pass off a better image of itself as it continues to expand to new markets and even explores the possibility of a potential public offering in the future. In fact, it seemed to be a lovefest onstage at times.

On the heels of Uber’s $5.5 million gift to Carnegie Mellon surrounding robotics and autonomous vehicles, Kalanick explained his thoughts about artificial intelligence, especially as it relates to driverless cars:

“There’s a lot of promise to it,” he said. “In the U.S. alone, there are 30,000 people dying in car accidents every year. What if it was zero? That’s part one. Part two is what happens if there’s no traffic. If you have algorithms driving instead of people, it’s safer. With Uber, you can see that [AI] is a disruptor, but are you going to be a part of the future or resist it? We don’t want to be like the taxi industry before us. We’re a technology company.”

Kalanick continued by saying, “There’s interesting things that will happen when driverless technology exists. Is Uber in a place where we can be optimistic leaders in helping with that transition? It’s not going to happen all at once, and it’s not going to happen soon. There’s going to be a need for leadership in cities with companies that make this type of technology to help with that transition. It’s an interesting challenge and opportunity to lead through it.”

Held at the Yerba Buena Center for the Arts in San Francisco, the event was packed with members of the press and attendees eager to hear what Kalanick had to say. His talk comes just days after an appearance on The Late Show with Stephen Colbert that was interrupted by protesters during the taping.

Benioff brought the appearance up during the fireside chat but didn’t even ask about the incident, only to ask Kalanick about whether that moment showed that Uber has made it. Kalanick remarked that he was nervous backstage at The Late Show, especially going out to a national audience on the same evening as Vice President Joe Biden’s emotional appearance. “There wasn’t a dry eye in the house that evening,” he said.

Perhaps summing up his thoughts about Uber, Benioff offered this insight to Kalanick:

Life is like an Uber journey: you get on and you get off, and you have to choose the destination.