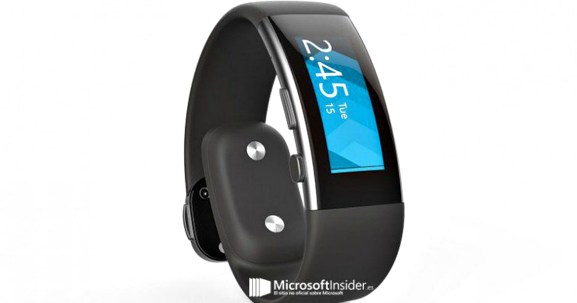 The flat-faced Microsoft Band wasn’t hailed as the most stylish wearable ever, but leaked renders of what is expected to be the second generation device surfaced via Microsoft Insider on Sunday, showing a new curved display.

The blog claims that we can expect a new metallic finish, at least on part of the front display panel, and physical buttons, as well as some new functionality — for example, users will finally be able to measure elevation (i.e. climbing or descending flights of stairs or otherwise steep terrain).

The report said the device will be more widely available across more markets at launch, including European countries like Spain, France, Italy, and Germany.

One other notable physical tweak that Microsoft appears to have made with the Band 2, known internally as “Envoy,” is a new location for the battery — now under the display instead of on the sides.

The original $199 band was announced in late October 2014, and positioned as a health- and productivity-focused wearable in the tradition of Fitbit.

As we wrote at the time, it offered “10 sensors for tracking steps, heart rate, sleep, and other biometrics. A UV sensor measures sun exposure, and a galvanic skin response sensor can tell you if you’re stressed out. Other sensors include an optical heart rate sensor, a 3-axis accelerometer/gyro, a gyrometer, an ambient light sensor, and a skin temperature sensor. There’s also a GPS radio for tracking routes, and a microphone for dictating notes on the run.”

While the first-generation band received mixed reviews, it generally did as advertised, and earned compliments for being simple and easy to use. Cross-platform availability was an important factor in its adoption, but it was plagued by poor battery life, and some had concerns that it wasn’t waterproof enough.

On top of these concerns, it was generally seen as being on the expensive side for what it offered, and, as we pointed out, didn’t exactly sport the most stylish or sleek design to persuade potential buyers to hand over a hard-earned $200.

I’d expect some sort of refresh to the Microsoft Health app, which syncs up with the band to display collected biometrics data, and is available on Windows Phone, Android, and iOS.

For all the final details on the Microsoft Band 2, we’ll have to wait until the company’s October 6 event. In the meantime, here’s a shot of the original band from 2014 to refresh your memory: