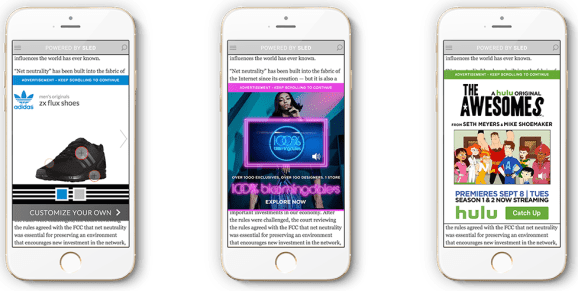 Cost-per-impression ad pricing is so yesterday. A New York City-based ad tech shop is today launching a limited beta of what it describes as the first-ever cost-per-second (CPS) platform for ads.

Sled Mobile’s Parsec platform is based on the idea that the key thing display advertisers want is user attention. Time spent with the ad, CEO and founder Marc Guldimann told me, is “a proxy for attention.”

While direct response advertisers have performance standards like making a sale or getting a form filled in, he noted that the key performance indicator for brand advertising is attention.

The new platform, with a pricing of one cent per second per device, is immune to questions about whether the ad is viewable, he said. That’s because the meter doesn’t start running until at least half the ad is on the screen for at least one second — the Media Research Center’s (MRC) basic standard for ad viewability.

As for the other digital ad bugaboo — fraudulent traffic generated by software bots — he pointed out that Parsec is integrated with the anti-fraud service from Moat. Although non-human traffic is always possible, he admitted, it’s likely to be low because the unique Sled format requires touch and gesture — two actions that are harder for bots to imitate. At least for now.

The Sled format is, in Guldimann’s description, “behaviorally native.” As a user scrolls down to read an article or news feed, the ad scrolls up an overlay, as shown in this gallery of examples. A user can dismiss the ad by pushing it down or scroll it up, view it, and then keep scrolling past it when done.

“You don’t have to change the mode you’re in,” he said, since the user views the ad as part of her continuous scrolling action — just like the same-mode ads in TV, search, and print. Within Sled, ads can have autoplay video, fullbleed video, static images, product carousels, surveys, and other features.

Guldimann said no one else has this “politely interruptive” format, which was launched when the company started at the end of last year.

He noted that mobile ad agency Celtra has an “inter-scroller” ad that is not placed in an overlay, so it breaks the content into before- and after-the-ad pieces. Ad shop Yieldmo offers a hyperscroller, but that’s right in the content stream — also not an overlay.

Sled is the first to use CPS for this kind of platform and attention-optimized ad format, he said. Chartbeat has a CPS tool that is not supported by a platform, he added, and a Brazil-based company called Web Spectator sells by CPS.

But, Guldimann noted, they use “adjacent ads” like banners, “sprinkled all over a web page [so] you can’t be sure of user attention,” since time spent on the screen could be driven by the content, not the ad. Sled would like the MRC to establish CPS as a valid standard, he said, although Sled Mobile is not formally submitting it.

Currently, the platform only supports mobile web, although Guldimann told me it will be able to handle in-app ads within a few months. Apple’s new iOS 9 supports web ad blockers, and he acknowledged that “some [blockers] will block us.”

Two advertisers have signed up so far for the new CPS platform — the San Antonio Board of Tourism and an unnamed client. An ongoing study with Microsoft Research is helping to measure this format’s appeal to users, as well as advertisers’ response to the CPS pricing.

Guldimann said a time-based pricing mechanism means that the advertiser and publisher ecosystem will emphasize ads that hold user attention. When I pointed out that time spent on the ad could reflect the ad’s complexity, he suggested that results from straightforward ads will help generate insight into what best attracts, and keeps, user attention.

While the Parsec CPS platform is only supporting Sled’s unique format, Guldimann said it could support any mobile ad format that meets the same attention requirements: fully interruptive so there’s no doubt the user is watching that ad, and controlled by the user.

With the new platform, an advertiser will say they want to buy, say, ten million seconds. Sled creates the ad, and then buys space through a direct sale on the mobile sites of publishers in its network, which include AOL and Rolling Stone.

The older Sled platform serves that same format, but on a CPM — cost per thousand impressions — basis. For that platform, Sled Mobile creates and serves the ads, but the publishers sell their space directly. It has supported about 140 campaigns since the end of last year.