Huawei’s first attempt at a smartwatch manages to get the watch part right, but is struggling with its identity to be more than that. The watch went on sale September 17 — the first that the China-based company has brought to the U.S. The watch is also available in Canada, Germany, France, Spain, and Italy this month.

A complete review of the watch will come later this week, but I wanted to share my initial thoughts so far after playing with the watch for the past day or so.

The simply named Huawei Watch is a looker. Packed in a fancy little box, it’s resembles a high-end classic watch; it even has a round face.

I’m a fan of the circular face, but it’s quickly apparent that everything it’s running in terms of software was originally designed with a square phone in mind. The round face tends to hide parts of square notifications, and it has an annoying tendency to cut off the corners of the alerts that are (again) seemingly designed for a square format. It’s usually still readable, but it just looks sloppy.

Above: The Huawei Watch’s round face has problems displaying its square notifications.

There just seems to be a disconnect between the physical design of the device — which Huawei states was designed first and foremost as a watch — and what it’s trying to do as a smartwatch.

Of course, the Huawei Watch has all of the features you’d expect a smartwatch to come with: different watch faces (the watch claims to be “always on,” but switches from whatever face you pick to a default one, for some reason), health monitoring software, alarms, a (mostly useless) flashlight, a weather app, and of course, standard watch features like a stopwatch and timer.

The watch measures 42mm in diameter, is 11.3mm thin, and comes with a 1.4-inch full-circle AMOLED (Active Matrix OLED) display. The display is 400-by-400 pixels with 286 ppi. The watch is made of cold-forged 316L stainless steel and sapphire crystal.  A little button is at 2 o’clock on the outside of the watch that pulls up the menu or puts it into sleep mode, and the device has 300mAh battery that Huawei claims can last up to one-and-a-half days. 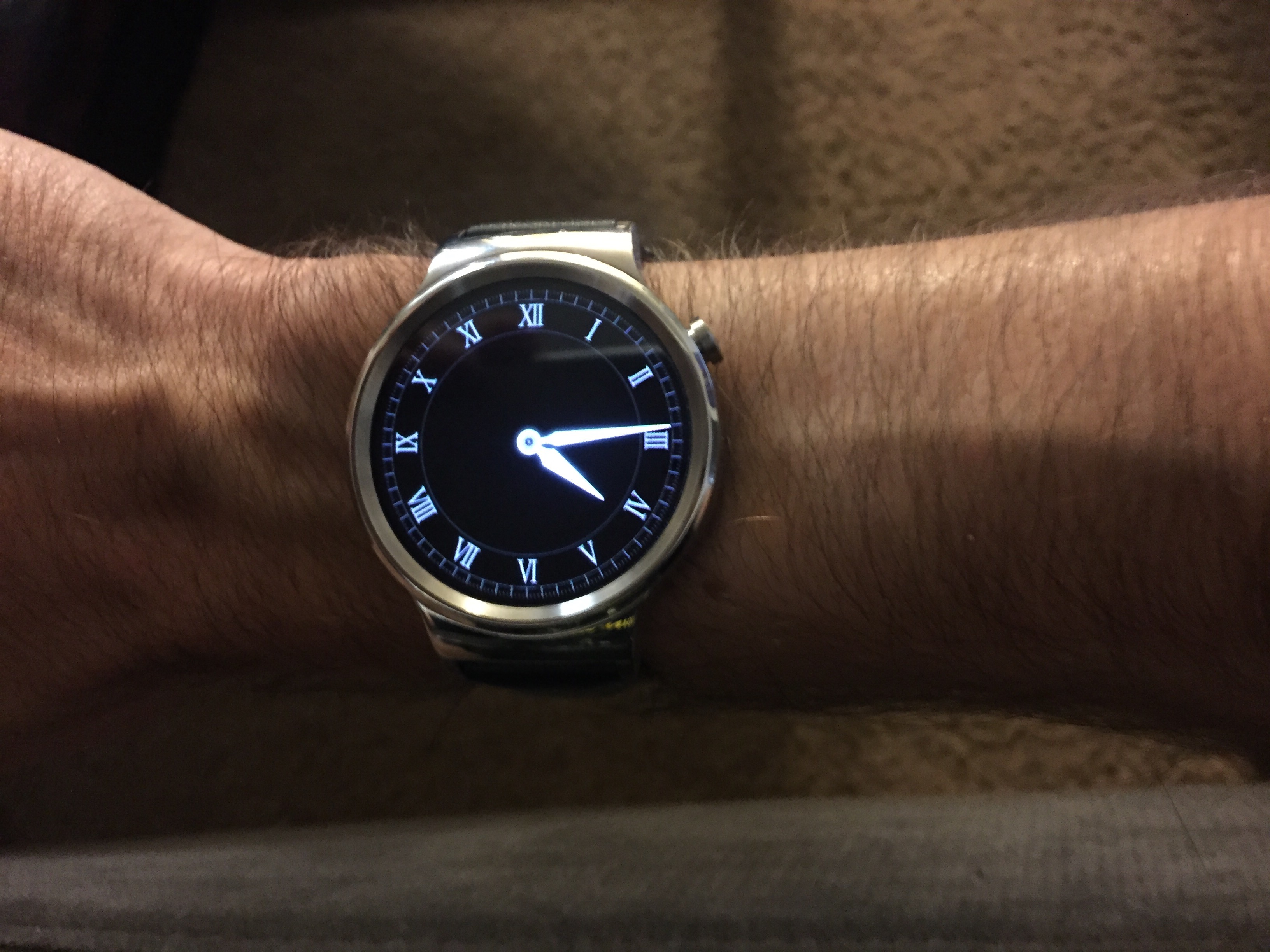 On the inside, the watch has a 6-Axis motion sensor (gyroscope + accelerometer), heart rate sensor (PPG), barometer, vibration motor, and comes with 512MB RAM plus 4GB ROM. It also seems to have a speaker, though nobody is quite sure what that does yet.

One of the nice things about the watch is that even though it’s running Android, it also works with iPhones through the Android Wear app, which is how I tested it. This gives the watch wider appeal, as it opens up the option to use the device within an iOS ecosystem. And if you are an iPhone user but are also are plugged into selected Google products — like Gmail — this could potentially be a good way to pull the different brands together.

The watch takes some getting used to. For example, I’ve been having some issues with quality and responsiveness of the touchscreen. But right now my biggest concern is whether it can help me access information more easily or poses a barrier to content I could get by simply looking at the phone.

It also doesn’t seem to be getting all of my notifications — or at least doesn’t vibrate for all of them — which is an aspect I’ll need to dig into a bit more.

I’ll be putting the watch through its paces over the weekend — including a camping trip, so look for a full in-depth review of the watch later this week. The Huawei Watch is available in editions running from $350 to $800, depending on the band and color of the steel.