MathCrunch, a mobile-focused math-tutoring startup that connects tutors with students, has announced a new subscription service, alongside a fresh round of funding from Stanford University.

Founded in 2014, the San Francisco-based company raised a $3.5 million seed round just a few months back, but it has now nabbed cash from Stanford’s StartX Fund, which was established in 2013 to help support Stanford alumni. While StartX doesn’t disclose dollar figures for its investments, MathCrunch says the money will be used to expand its product features and “grow its fleet of tutors to accommodate its rapid growth.” 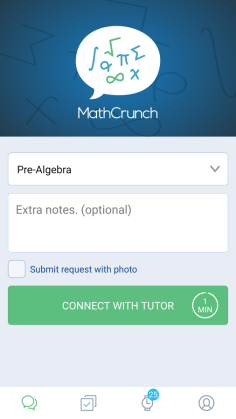 Through the app, users can snap a photo of a problem to request help with (e.g. a graph), ask impromptu questions about specific problems, and pretty much anything else to do with geometry, trigonometry, calculus, algebra, and more.

Perhaps the most notable facet of today’s news is the official unveiling of its new pricing model. Before, students were charged $0.50 per minute, which could either be billed automatically or paid via credits earned by referring friends. Alternatively, they could buy time in 30-minute ($12), 60-minute ($22), or 120-minute ($40) chunks — these had to be used in one go, rather than split across multiple sessions.

MathCrunch is one of many so-called “ed-tech” startups to launch in recent times, with the likes of General Assembly, Udacity, Udemy, and Coursera all gaining momentum. MathCrunch is slightly different in that it’s not offering courses — it’s aimed squarely at young learners looking for specific help to specific mathematical problems.

Its mobile-first approach is indicative of the demographic it’s targeting, while real-time instant messaging will be familiar to anyone accustomed to using the likes of WhatsApp. But the company reckons the real value in its service lies in the quality of its tutors. Today, it’s rolling out a new “360-degree tutor rating system” that means tutors are not only reviewed by students, but by other senior tutors.

“What sets MathCrunch apart is not simply our ability to connect students faster, but also that we invest heavily in the development of our tutors, and incorporate the most effective teaching techniques to serve various learning styles and needs of our students,” said Naguib Sawiris, MathCrunch’s founder and CEO.