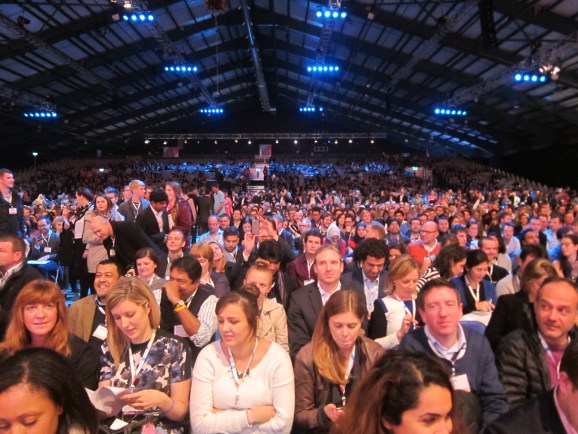 The organizers of the Web Summit, one of the fastest-growing technology conferences in the world, announced today that the event would move from its home in Dublin to Lisbon, Portugal in 2016.

In a blog post, founder Paddy Cosgrave said the event had outgrown its hometown and needed to find a new city where it could continue to expand.

“It has not been an easy decision to move Web Summit from its Irish home,” he wrote. “We are going because we want to take the next step on our journey to international growth.”

Though the exact dates were not announced, the event will be held at the MEO Arena and FIL – Feira Internacional de Lisboa.

Web Summit is one of the largest tech gatherings in Europe, along with Slush in Finland and the massive Mobile World Congress in Barcelona. Local officials in Dublin estimated that the event had an economic impact in 2014 of $110 million.

While no doubt a blow to Irish economic leaders, the decision is not entirely surprising. Earlier this month, Cosgrave said he was in negotiations with other cities.

It was clear even then that the Web Summit had overwhelmed its hometown.

The stages were spread across two sections of the Royal Dublin Society’s fairgrounds, requiring a 15-minute walk between the various stages. Then there were dozens of social events being held across the city every night, often until the early morning hours.

On top of that, the RDS has repeatedly refused Cosgrave’s request to let him install a new tech infrastructure for the Web Summit. That meant that throughout the event, Wi-Fi rarely worked and making phone calls was sometimes difficult, leaving many attendees frustrated.

And while Dublin is a great city, finding accommodations anywhere near the event was nearly impossible. Getting to and from the event, or finding taxis after hours, was a logistical nightmare. And, of course, the weather in Dublin during the first week of November is somewhat less than tropical.

In growing the Web Summit from 400 attendees in 2010 to the 22,000 last year, Cosgrave made it plain that his ambitions were massive. He has created teams of data scientists to improve connectivity for conference goers. And his company has launched other events in places such as Las Vegas, Hong Kong and India.

The blog post notes that the new venues can accommodate up to 80,000 people (gulp!) and that the city has better transportation and hotel options.

“We know now what it takes to put on a global technology gathering and we know that if Web Summit is to grow further, we need to find it a new home,” Cosgrave wrote. “Our attendees expect the best.”