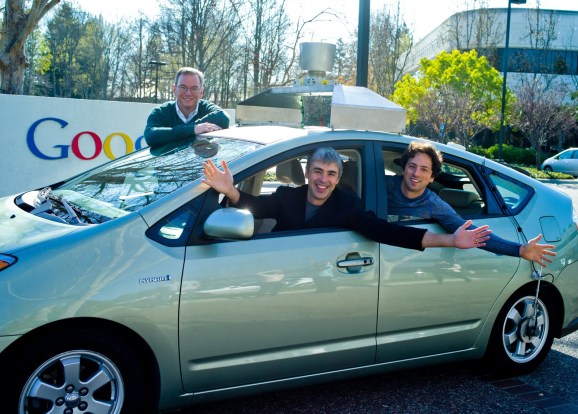 Google cofounders Sergey Brin and Larry Page have long wanted to get self-driving cars on the road. Page first put the project in motion in 2007, by convincing artificial intelligence researcher and DARPA Grand Challenge participant Sebastian Thrun to leave Stanford and come to Google, and they’ve only been publicly seen driving on the road in the past year and a half.

Today, after Google gave a status update on the project to press gathered at company headquarters, Brin dropped by. It became clear just how proud the guy is to see his vision getting closer and closer to becoming a reality.

“In my rides in the self-driving cars now a number of times, they’ve really impressed me,” Brin said, “and I’ve gained appreciation for what 360-degree awareness and always paying attention can do, whether it’s being able to, you know, swerve when somebody does something sudden, you can shift to an adjacent lane because the car already knows that lane is available, and because an ordinary car would have to slam on the brakes.”

The current version of Google’s driverless cars keeps people out of the loop — the vehicles have no pedals or steering wheels. And that autonomous power could be powerful.

“I don’t think we’re going to see no human driver anytime soon, there will always be the pleasure of being able to hit the open road, but I think for a larger percentage of day to day driving it will be safer for occupants to have a self-driving car,” Brin said. “And it will improve the community — reducing congestion in areas where you probably don’t have that open road driving.”

But Brin also likes how the Google car in its current form could be a jumping off point.

“Also there’s a future where you can have your own car and switch it on and off,” he said. “That’s not what this prototype is designed for, but I think this technology is important in the future and I’d like to see it used in as many situations as possible.”