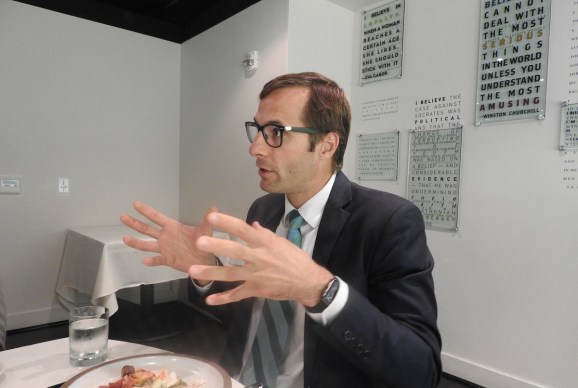 The 2016 International CES trade show is going to be big again. Perhaps not as big as with last year’s 176,000 attendees, but likely above 150,000, according to Gary Shapiro, chief executive of the Consumer Electronics Association, the trade group which puts on the show.

If the show gets smaller, Shapiro said, it will be deliberately so, as the show organizer is trying to preserve a good experience.

Exhibitor bookings show that there will be a lot more space dedicated to innovative products such as drones, augmented reality, virtual reality, robots, smart cars, health and wellness, and 3D printing, Shapiro said at a press lunch in San Francisco. All told, CES will have about 25 different marketplace sections with categorized products.

He also said that Intel chief executive Brian Krzanich will once again give the opening keynote speech at the 2016 show, which takes place in the first week of January.

The show is moving far beyond just consumer electronics.

“Electronics doesn’t begin to describe what we are doing,” Shapiro said.

The Internet of Things, or making everyday things smart and connected, is such a big trend that it won’t have its own section at the show. There are 900 exhibitors that say they will show Internet of Things products.

“That’s too many to be put into a section,” Shapiro said.

The advertising and marketing tech area of the show has grown so much it will take up about three hotels.

The CEA figures that it takes about seven years from the initial talk about a new trend before it really winds up changing society and the way people think about it.

At the same time, the adoption curve for new technologies is compressing, with uptake coming quicker and declines coming quicker after saturation, said Shawn Dubravac, chief economist at the CEA, at the press event.

Dubravac said, “The conversations are starting to change around CES.”

Ten or 15 years ago, people focused on what was technologically possible.

“Now, we’re talking a lot more about what is technologically meaningful,” he said. “How is this going to improve our everyday lives? I feel that is a very healthy change in the dialogue.”

One big change is ubiquitous sensors, or at least a wide deployment of sensors for the Internet of Things and other applications.

“Sensing and sensors are a key piece of everybody’s business,” he said. “When something shifts from a scarcity to a surplus, we move to a place where we can waste that resource.”

When Apple transformed Xerox’s graphical user interface for the much cheaper Mac, for example, it became much more usable. “You’ve seen that play out time and again,” he said. “Sensors are there today.”

Those sensors are changing what a device is capable of doing. A tangible example is putting image sensors on both the front and back of a smartphone.

“We get selfies, and we can argue if that is a good thing or a bad thing,” Dubravac said. “But it fundamentally transformed the usage.” 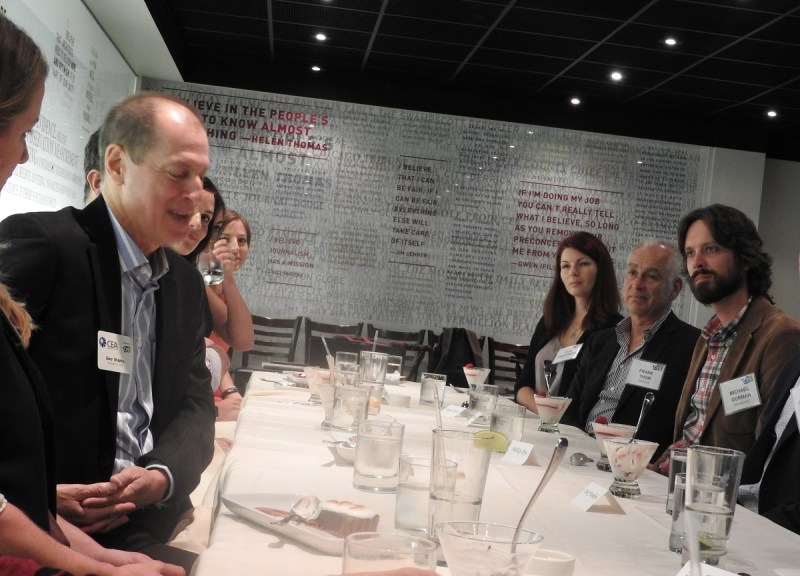 Above: Gary Shapiro, CEO of the Consumer Electronics Association.

Dubravac said that we’ll move away from discussions of devices to thinking more about the overall solution. People can then figure out if there’s a good usage scenario.

“We’ve put the Internet in your toothbrush,” he said. “Does it matter?”

Dubravac said that devices are now going to benefit from more feedback, or something that he calls aggregated learning. The devices collect data and pass it back to the manufacturer, and the products can be improved as a result.

“Ten years from now, we’ll see voice recognition innovation more than anything else,” he said. “It improves because the devices can learn from everyone.”

Dubravac noted that smartphones have certainly changed a lot of products, as the smartphone screen acts as a digital viewfinder for a lot of devices, such as camera attachments and drones.

“Part of the explosion is happening because of the hub device we all carry in our products,” he said.