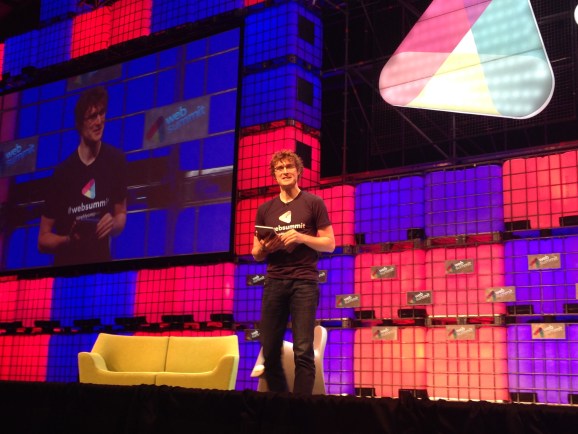 Paddy Cosgrave, founder of the Web Summit on stage in November 2014.

Updated Oct. 2 with additional reaction from Jason Calacanis and Tech.eu.

A quiet argument about the ethics of the Dublin-based Web Summit, one of tech’s fastest-growing events, has finally broken into full view thanks to a blistering response from the conference’s founder.

In a blog post today, Paddy Cosgrave, who started the Web Summit five years ago, laid out in detail how startups are selected for the event and what they are typically charged. The post comes after a number of tweets from investor and entrepreneur Jason Calacanis, who claimed the event was being deceptive and charging startups exorbitant fees to attend.

The @WebSummitHQ is charging startups $10,000 to meet with Angels according to founders emailing me. Not cool, not worth it.

“We have NEVER asked startups to pay €10k to meet angels,” Cosgrave wrote. “To be clear, Web Summit is a premium event and our price are set to help us deliver the highest quality of attendee — which delivers the best experience for everyone.”

The response from Cosgrave comes just as European-based Tech.eu posted a piece by entrepreneur Neil Murray that was also critical of the summit’s fees and marketing practices. Like Calacanis, Murray acknowledged that he has never been to Web Summit.

“This is where I have my biggest problem with Web Summit: startups should not be where you make your money from at an event,” wrote Murray. “This is harmful to them, and to the wider community.”

Cosgrave explained the three tiers of prices for startups, with the top being $4,400 for two tickets for startups that have raised more than $3.4 million in venture capital. He also noted that the conference had rejected 1,000 startups who applied in the past month alone to attend the next Web Summit in November, saying they were too early in development and wouldn’t get any value out of the conference.

But Cosgrave went beyond rebutting the claims by claiming that Calacanis (who is not explicitly named) might simply be jealous of the Web Summit’s success. Among his many startup-related activities, Calacanis hosts his own tech conference called “Launch.”

“As word has spread, some incumbents have gone on the marketing attack,” Cosgrave wrote. “Some conference organizers, who have never attended our events, are somehow sure we run a giant scam, hoodwinking startups the world over. They set themselves up as saviors of the startup world. We call it ‘martyr marketing.'”

This latest tussle comes just as Web Summit announced it would be moving the conference next year to Lisbon, Portugal. Cosgrave has said that the event, which drew 22,000 people last year and is projecting 30,000 attendees this year, has outgrown its hometown.

That decision has elicited some criticism in Ireland.

UPDATE: Following the blog post from Cosgrave, Tech.eu editor Robin Wauters responded with his own take on Web Summit. In short, Wauters said he’s overwhelmed with emails and messages from people criticizing the summit but who are afraid to go public.

“I’ve attended literally hundreds of conferences, summits, festivals and meetups over the past decade, in all corners of the world, and I have never received so many complaints about any organization as vividly and frequently as the Web Summit,” he wrote. “Every year, it seems to get worse.”

Calacanis responded via Twitter by offering some free tables to startup founders, while repeating his previous criticism of Web Summit.

3/Nominate a startup for a free table & cc @paddycosgrave #martyrmarketing Should startups pay $10k for a table?