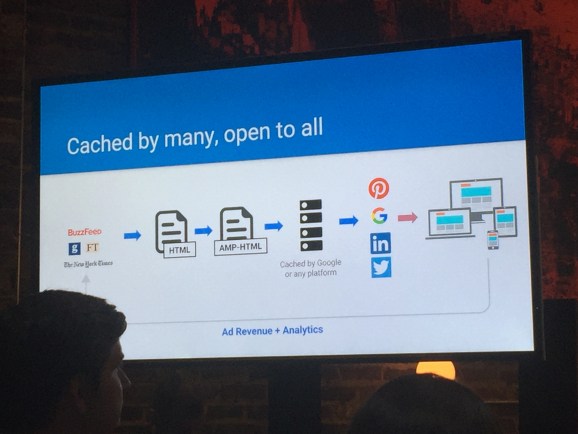 This morning Google revealed it’s working on an open source initiative for mobile Web that would deliver articles to readers instantly.

The Accelerated Mobile Pages Project is designed to avoid slow browser load times, so stories can be accessed quickly from within mobile web browsers.

Rumors started percolating about the project last month. The project’s GitHub page is live, but Google says AMP is still in preview mode.

The feature mimics quick-loading elements of Facebook’s Instant Articles and Snapchat’s Discover. However, Google’s mobile pages project differs from previous publishing tools in that it’s not meant to host content. The project relies instead on specially cached links. The technology reduces both rendering time and the time it takes for content to travel from its source to a reader.

In addition to hopefully driving traffic to publisher content, cached webpages could also make ads displayed within them more valuable by giving them a longer shelf life.

Plus, it’s an open tool, meaning anyone can use it. It’s also unbranded, allowing publishers to retain the look and feel of their content. This is perhaps the tool’s most salient quality.

Facebook Instant Articles and Snapchat Discover are becoming popular for their ability to not only distribute content to eager readers, but to also support engagement. But these tools are confined to single platforms, forcing publishers to rely heavily on third parties in order to reach their audience.

AMP, on the other hand, allows publishers to get better engagement on a variety of platforms, including Google search, while also pushing readers to publisher sites. Better-performing pages may also mean higher ranking for publishers in search results.

Publishers have been integral to the development of this product, as have content networks. Prior to the launch, Google worked with Twitter, Pinterest, BuzzFeed, Hearst, The New York Times, The Economist, Time, Gannett, and the BBC, among others.

Google says that the AMP project is core to its overall mission, which is “to organize the world’s information and make it universally accessible,” according to Richard Gingras, Google’s head of news and social products.

But the initiative also helps Google’s bottom line. The product diversifies the number of places around the Web where consumers can experience rapidly loading content, reducing publishers reliance on Facebook and others.

By helping publishers get higher quality web content, Google might also be able to ask more for surrounding ads.

Most notable, though, is that publishers are in an increasingly advantageous position. As ad blockers grow in popularity, companies that rely on digital advertising for revenue are forced to create more dynamic and quality advertising. To do that, they’ll need to vie for attention from publishers. As a result, publishers may have more opportunity to create better content, more lucrative ads, and ultimately reach a wider audience.