Light launched its L16 camera today, which packs a bunch of small cameras into one device to (supposedly) shoot photos of DSLR (digital single-lens reflex) quality.

The camera is a key sales point for the smartphone, as such small sensor technology has developed and improved quickly over the past few years. The L16 is all about taking a bunch of these cameras — 16 of them — and jamming them into one dedicated device.

The L16 works by firing the multiple cameras at multiple focal lengths simultaneously, then computationally fuses the images together to create a single high quality image up to 52 megapixels, the company says. 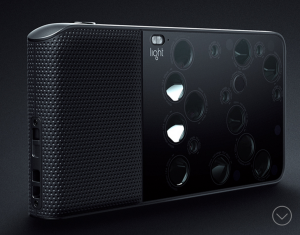 By shooting an image at multiple focal lengths, the L16 captures more data in every shot, allowing the users to make adjustments, like depth-of-field, later.

The camera will retail for $1,699, Light says, and will ship in late summer 2016. A limited quantity will be available for pre-order through November 6 at a special price of $1,299.

“Until the L16 camera, this required expert knowledge, heavy equipment and high prices,” said Light CEO and cofounder, Dave Grannan, in a statement. “Light’s vision is to enable anyone to take amazing pictures, and to change consumers’ mindset that quality must come at high cost, a big size and with a steep learning curve.”

Light was founded in 2013 and is headquartered in Palo Alto, California.