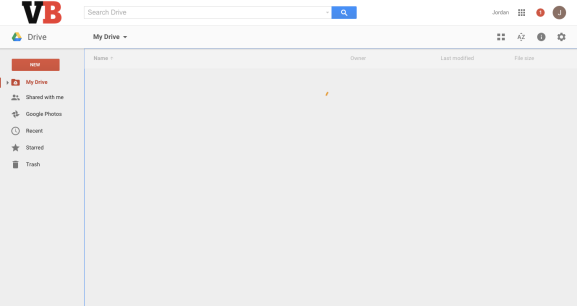 Google Docs is not working.

Update at 2:30 p.m. Pacific: Google Docs should be back for everyone. See below for details.

Google Docs is throwing error messages for us here at VentureBeat.

In the activity section of my personal Google Drive, I saw this error message: “Whoops! Activity had a glitch.”

Some of us are also finding a different message: “Google Docs encountered an error. Please try reloading this page, or coming back to it in a few minutes.”

Google knows about the problems.

Looks like something's up with Docs – but fear not, we’re on it & you’ll be editing again in no time. Stay tuned here!

And the Google Apps Status Dashboard is showing issues for Drive, Docs, Sheets, and Slides. “We’re investigating reports of an issue with Google Drive. We will provide more information shortly,” Google wrote at 11:55 a.m. Pacific.

Update at 12:04 p.m. Pacific: my VentureBeat Google Docs is loading again, albeit a bit slowly. The activity error message on my personal account hasn’t gone away yet. On both, the Recent and Trash pages are very slow. And good luck composing a new file in Google Docs. Trying to make a new spreadsheet with Google Sheets? You might see this: “Sorry, the file you have requested does not exist.” As for Google Slides, it’s working more reliably.

Update at 12:21 p.m. Pacific: I’m now able to compose new Google Docs, but I’m seeing connectivity issues. “You are offline,” Google says when I hover my mouse over the little lightning icon near the top left of the screen on my personal Google Docs account. But hey, at least content is apparently being saved offline — that’s better than nothing. I’m still having trouble opening certain files with Google Docs.

Update at 12:35 p.m. Pacific: We’re still having problems, and Google is still working on it:

We know something's up with Drive for the moment. Rest assured, we're on it and we'll update soon.

Update at 12:53 p.m. Pacific: It’s been an hour since the outage started. Google Sheets still doesn’t work. I can now compose and save new documents and rename them in Google Docs, but it’s taking a while to save updates. The Recent and Trash sections are still taking a while to load.

Update at 12:58 p.m. Pacific: Some Google Docs and Google Sheets files are loading again. That includes test files I made during the outage. But you still can’t make a new Google Sheets document.

Update at 1:10 p.m. Pacific: Google is still working on it. “Our team is continuing to investigate this issue,” Google said in an update on the Google Apps Status Dashboard. “We will provide an update by 10/9/15, 2:10 PM with more information about this problem. Thank you for your patience.”

Update at 1:53 p.m. Pacific: I can load pretty much every Google Sheet file now, and I can compose new ones too, although everything is still moving slowly. The Google Apps Status Dashboard doesn’t have an update yet saying it’s back for everyone.

Update at 2:10 p.m. Pacific: Google has an update: “Google Drive service has already been restored for some users, and we expect a resolution for all users in the near future,” the company said on its Apps Status Dashboard. “Please note this time frame is an estimate and may change.”

Update at 2:30 p.m. Pacific: Google Docs should be working again for you. “The problem with Google Drive should be resolved,” Google said in a new Apps Status Dashboard update. “We apologize for the inconvenience and thank you for your patience and continued support. Please rest assured that system reliability is a top priority at Google, and we are making continuous improvements to make our systems better.”

Drive is back in business. Thank you for hanging in there while we took care of it. Have a great weekend!

This is hardly the first time Google Docs has gone down.