Toshiba is the latest tech giant to announce a new Windows 10 device. At an event in Tokyo today, the Japanese company officially lifted the lid on the DynaPad, a 12″ Windows 10 tablet / laptop hybrid that is setting out to “reinvent pen and paper.”

First teased at IFA in Berlin back in September, the device is 6.9mm thin and weighs in at 569 grams while in tablet mode. But it also comes with a physical keyboard, which the main body slips into, transforming it into a laptop. 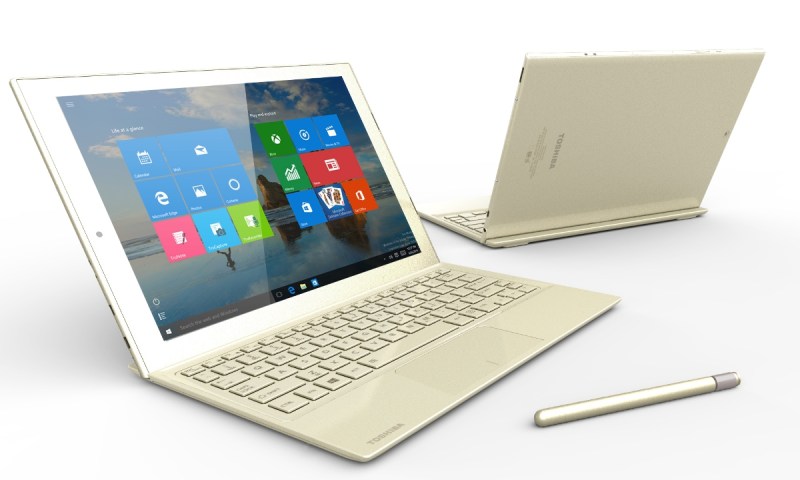 The core raison d’être of the Toshiba DynaPad is to replicate the feeling of writing with a traditional pen and paper. And this is why the device will ship with a Wacom Active Electro-Static (AES) stylus, which recognizes varying degrees (2,048, to be exact) of pen pressure. The tablet is compatible with Microsoft Office and Toshiba’s own suite of apps, and the screen sports a “palm-rest rejection” feature that lets you rest your hand on the screen while doodling or writing, without making accidental marks.

As one of many so-called “all-in-one” devices to hit the market, the DynaPad faces stiff competition not only from the likes of Lenovo’s hybrids, but also from Microsoft’s Surface machines, and perhaps even Apple’s iPad Pro, which can be turned into a laptop-style device with a keyboard add-on, and can be paired with the new Pencil stylus.

However, without full knowledge of Toshiba’s U.S. pricing, it’s difficult to make comparisons in terms of value-for-money. We do know that the DynaPad will cost around ¥130,000 ($1,080) in Japan when pre-orders open today, which gives some indication of what we can expect. However, the Toshiba will likely cost less than the currency conversion above would suggest when it hits the U.S. and Europe in Q1 2016.

It’s also worth looking a little more closely at the name Toshiba has chosen for its new device. Geeky historians may remember that Toshiba actually launched a similarly named device way back in the early 1990s — the Dynapad T100X was a “pen computer” for “all those who thought that a computer was only for people who know how to type.” It’s interesting to see Toshiba reimagine an old device for a very similar use case in the modern Internet age.