Just as you thought the music-streaming market had reached saturation point, a new company enters the fray with a slightly different approach to music on demand.

Britain’s Electric Jukebox, which was unveiled at a glitzy launch event in London today, has some big-name backers in the form of Robbie Williams, Sheryl Crow, Stephen Fry, and Alesha Dixon. Unlike Spotify, Rdio, Deezer, Google Play Music, or Apple Music, Electric Jukebox takes a hardware-based approach, bypassing the need for a smartphone or computer altogether.

It’s kind of like Amazon’s Kindle Fire TV stick as opposed to Google’s Chromecast, insofar as you plug a little HDMI dongle into the back of your TV, connect it to your Wi-Fi, and operate it with a little remote control. Anyone in your living room can use it.

There are three simple options on the screen, “My Music,” “Discover,” and “Search,” which offer “millions of albums, curated music channels and celebrity mix-tapes in CD quality.” 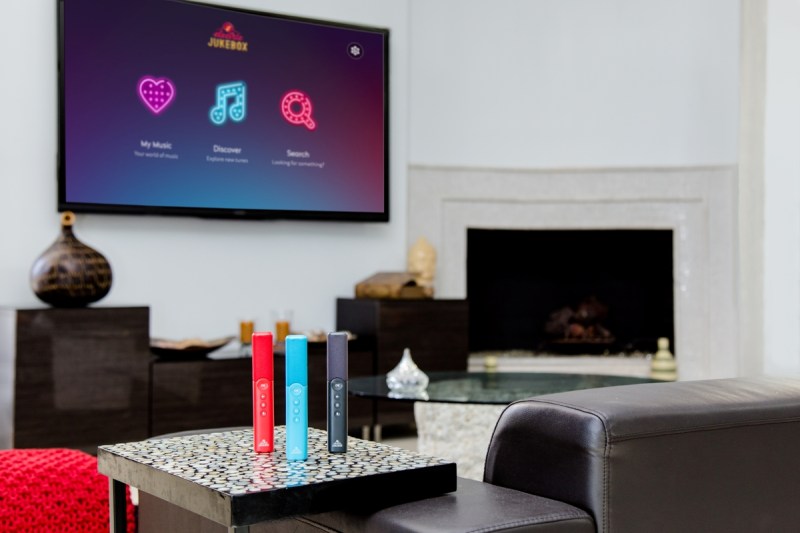 In terms of prices, Electric Jukebox can be pre-ordered now in the U.S. / U.K.for $229 / £179,  though it is available at a $30 / £30 discount until October 21. If you think this seems steep, you should also know that there is an annual subscription of $60 / £60 (which is included free in your first year). This equates to $5 / £5 a month, or half of a premium Spotify subscription. You can continue listening free after the initial 12 months, but you’ll be limited to a Pandora-esque service that includes an ad-supported selection of “curated channels” and “radio stations.”

While some would say it’s foolish to write off a new service before it’s even available, the celebrity-backed launch does bear a resemblance to Jay Z’s Tidal music-streaming service that was relaunched this year. It’s not enough to stick some celebrities behind a new product and hope it will sell. This leads us to look at the product itself.

Yes, it does have a discernible differentiator from the likes of Spotify, Apple Music, and so on, but I’m just not convinced many people will be willing to part with $229 for something that can only be played through their television. It might be CD-quality music, but unless a decent sound system is hooked up to the TV, much of that will be lost.

“We want to bring music back into people’s living rooms — rather than huddling around a laptop or smartphone to play music, or being forced to rely on old CDs and radio, we’ve created a music device that is simple and easy to use and which works straight out of the box. Whilst some may be comfortable with Spotify and Apple Music and spending hours configuring these services on specialist streaming devices, the vast majority of consumers really want something that works instantly, out of the box, without a monthly subscription or credit card. That’s what we’ve created. Mass market streaming has finally become a reality.”

It’s worth looking at some of these assertions. People generally don’t huddle around laptops or smartphones to play music. And they usually don’t spend “hours” trying to configure them on “specialist streaming devices.” Lewis also refers to “monthly subscriptions,” but this ignores the fact that the Electric Jukebox has an annual subscription (called a “music pass”), as well as the initial cost of buying the HDMI dongle. 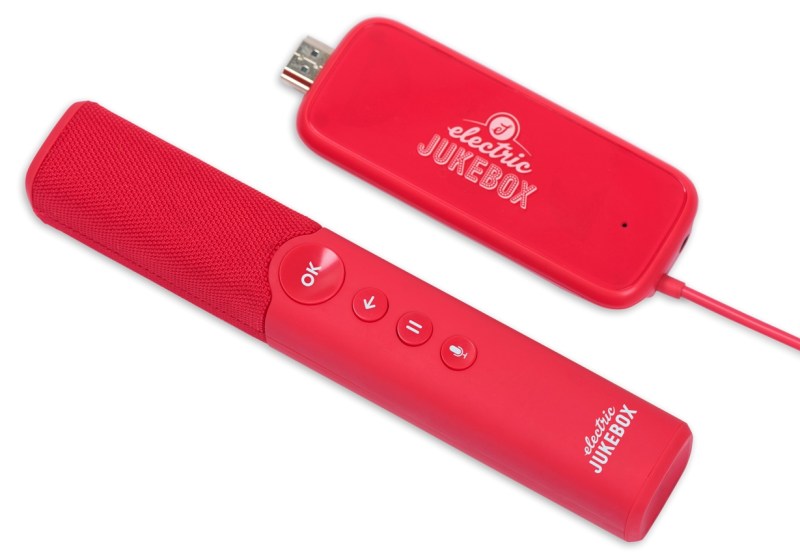 Over a four-year period, you will have paid $410 with Electric Jukebox, including the cost of the HDMI dongle. Over a four-year period on Spotify, for example, you will have paid around $480, except with Spotify you can play your music through any Bluetooth speaker or headphones. It’s also worth pointing to Google’s Chromecast and Chromecast Audio, $35 devices that let you stream Spotify to your big-screen and home sound system. And they’re super easy to set up, while also letting you beam a ton of other content, such as Netflix, to your TV.

The Electric Jukebox does promise simplicity — no app downloads or user accounts required — and the controller can be powered by gestures, with a built-in microphone for voice commands. These little extra touches may give it an edge over its software-focused competitors. That said, it’s difficult to see it gaining much traction in what is already a fiercely competitive field. And its target market is likely already fairly tech savvy, so messing around with mobile apps and registrations really isn’t that much of a hassle.

The celebrity tie-ins also leave me feeling more than a little skeptical. I mean, why would I want Stephen Fry — a fine actor and intellect, no doubt — to curate music for me? Or Sheryl Crow, Robbie Williams, or Alesha Dixon for that matter — even if I were their number one fan, their skills as musicians are irrelevant to their ability to unearth great music. It’s purely a marketing gimmick, and one that may not bode well for Electric Jukebox’s future.