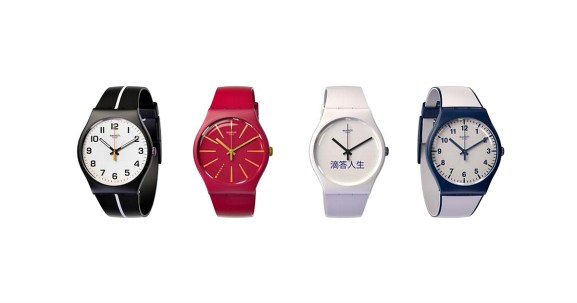 Swatch launched a new NFC-enabled payments watch for the Chinese market at an event in Shanghai on Wednesday, due to be rolled out there in January next year (and coming to the U.S. and Switzerland after that). To do so, Swatch has teamed up with China UnionPay and the Bank of Communications.

The Swatch Bellamy represents the company’s entrance into the contactless payment space in China. “The first four watches combine exciting, colorful yet functional Swatch design with built-in NFC (Near Field Communication) technology, allowing people to use their watches to pay for purchases in shops and stores around the country,” Swatch said in a statement.

The device seems unlikely to pose much of a threat to Apple, despite some commentators hinting at an odd rivalry. For one thing, this is by no means a smartwatch — it’s very much a traditional “dumb watch,” with no Internet connectivity or smartwatch functionality. It doesn’t even offer a touch display.

Consumers in China who decide to pick up one of Swatch’s payments watches will have to go into one of the Bank of Communications’ 2,785 branches across the country to activate it. That sounds like an immediate bottleneck to adoption. Is it really worth the hassle in the age of instant tech gratification, where tech products far and wide work from the moment they are unboxed?