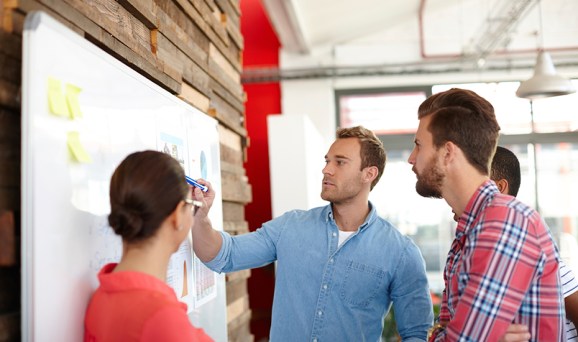 The agile design and development movement has become a foundational principle for tech startups, and as those startups move into new markets, the philosophy and process has also spread to disrupt other industries in sometimes surprising ways. Although retailers have always been quick to recognize opportunities and innovate online, the same cannot be said for their internal processes in the development and deployment of software. This blind spot leaves some of the biggest retail brands vulnerable.

The agile movement emphasizes iteration over perfection, the ability to move quickly and to constantly learn and adapt. The process from ideation to development to deployment is less a straight line than a continuous cycle of incremental improvement incorporating feedback in real-time. Ideas and insights are not simply driven top-down, but rather always feeding directly into each iteration from actual user experience.

As much as retailers emphasize their online channels and customer experience, too many are still locked into a waterfall mindset when it comes to improving that experience. Technology deployments are burdensome and slow. Ecommerce initiatives too often morph into bloated, complex projects that take months to roll out. The result is that retail sites are often static, and what customers experienced on-site three months ago is still there this month.

A big blocker to iterative processes is that retail is such a metric-driven industry. Any dip in sales presents an obvious bottom-line setback. Bugs directly equate to lost revenue. Thus a culture of caution takes hold, and risk is suppressed through rigorous, top-down process.

But what’s the cost of that mentality, of de-valuing quick experiential feedback and iterative advancement?

Innovation is systematically suppressed, and the organization is driven by fear rather than opportunity.

Here are 3 areas where you can enact a shift towards agile methodologies in your ecommerce operation:

Because site changes impact sales, many ecommerce teams ideate in a departmental silo. Someone is always on the hook for the numbers at the end of the day, and the cost of missed opportunities are less measurable than direct sales dips. The result? Potential breakthrough ideas are passively discouraged in favor of playing it safe. In fact, global cart abandonment rates have been holding steady between 60 percent and 70 percent for over a decade, a testament to a bad habit of benchmarking against industry averages instead of embracing transformative ideas.

All departments need to be in dialogue about ways to move the needle. Ideation at its best is interdisciplinary and collaborative. The design team has insights that the sales team might be blind to, and customer service reps have a very different point of view from the C-Suite.

Ideation is about sparking insights against each other to evolve an idea. With more voices and perspectives freely communicating, bigger and better ideas will merge.

New ideas need to be tested quickly. If an insight emerges from a customer interaction, it should be tried and vetted. Promotions and features should be rapidly deployed and A/B tested, even if they haven’t been perfected through multiple rounds of focus groups and dev-testing. Real online customers offer the biggest and best focus group available, and their feedback is both immediate and subject to real-world circumstances that are hard to simulate.

In order to offset the risk of rapid deployment, a truly iterative process needs to be in place that can adjust just as swiftly. Thus feedback from actual user experience can be incorporated on the fly and improvements made incrementally. Likewise, empower other departments like marketing and merchandizing to experiment and test new ideas.

A usability study from a few years back found that ecommerce sites had the highest rate of failure for task completion. Now imagine what your site would look like if you were doing live user testing in concert with each site design change. Not only would you validate or invalidate projects quicker, you’d learn immediately what works best for your customers.

The real secret to great iteration is not the improvements that eventually emerge, but rather the ability to quickly kill projects that are not performing. If an update to the site takes months of process to deploy, it’s much harder to recognize that the decisions were misdirected and then to change them. An agile process minimizes the impact of projects that aren’t working.

Just because a lot went into a deployment doesn’t mean it’s sacred. And being able to identify wrong turns is much easier when you haven’t already driven too far in the wrong direction. Killing projects doesn’t equate to failure, but rather a key insight gained into what doesn’t work and why. That is often as valuable for recognizing new opportunities as projects that were unabashed success stories. The oil industry has known this for decades — for most of the last century drilling success rates were hovering around 50 percent. Today, it’s closer to 85 percent.

Isabelle Royer has done some interesting research on bad projects, and found that most of these projects continue because the company believes deeply that the project will eventually succeed. Agile doesn’t suppress organizational belief, but it forces you to face facts at several key junctures. That should be comforting news for most managers — as it gives you second chances to apply budget and resources to smarter bets.

Implementing an agile methodology across the organization may risk short-term dips, but they are small stakes compared to what’s riding on the massive deployment that is months in the making.

Too often we’re tempted to put all our eggs in one basket. Whether that basket is the holiday shopping season, a high-performing annual sales campaign, or an omnichannel strategy, the risk is betting your business before you’ve even had a chance to test any of the changes in the wild.

If you embrace the agile movement both as a methodology AND a cultural imperative, you’ll find that many rapid incremental changes lead to transformative results.

Jason Wallis, CTO at Mozu, has a strong passion for crafting technology and software that drives business growth. Mozu is the modern cloud commerce platform. Mozu makes it easier than ever for brands to create custom cross-channel sites that drive sales and accelerate time-to-market. Request a demo at https://www.mozu.com/.