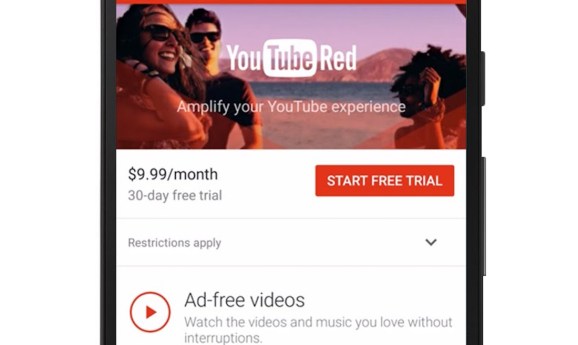 At an event in Los Angeles (livestreamed to offices in New York and San Francisco), YouTube revealed its much-anticipated subscription service, YouTube Red.

Starting on October 28, the company will offer users a $9.99 per month membership for access to ad-free videos. Be warned: If you sign up via iOS, the service will cost $12.99 per month.

Rumors of paid content started swirling in April, when a letter sent out to YouTube program partners made its way to a few media outlets. The letter promised to pay out 55 percent of net revenues from subscription fees. During the event today, the company wouldn’t say exactly how much of subscription revenues would be shared with its creators, but chief business officer Robert Kyncl said it would be “the vast majority of the revenue coming in.” The people who get the most viewership will get the lion’s share of those revenues.

Today’s announcement is just the beginning for YouTube Red. The company said that it hopes to eventually start providing members with more original series and films — putting YouTube more directly in competition with Netflix.

To get into original productions, Netflix has hired Susanne Daniels away from MTV, where she was president of programming.

YouTube Originals capitalizes on its homegrown talent. Among the titles to debut this January are A Trip to Unicorn Island, which documents comedian/rapper Lily Singh’s world tour; Sing It, a fictional singing competition featuring Benny and Rafi Fine (of Fine Brothers fame); and Scare PewDiePie, a reality series aimed at freaking out host Felix Arvid Ulf Kjellberg. For PewDiePie’s show, YouTube involved creators of The Walking Dead and Maker Studios.

YouTube Red will also launch a movie called Laser Team, a comical space adventure put together by production studio Rooster Teeth. Daniels promises there will be even more content later in 2016.

In addition, the company also revealed a new music app called YouTube Music. This app is all about music discovery, giving users free rein to explore YouTube’s various music catalogs. The app will help users create a customized station and make music recommendations. It also includes remixes and live performances — content you might not be able to get through Spotify.

Last year, the company rolled out a service called YouTube Music Key that offers users ad-free songs and music videos for $8 a month. The service was in beta until September 15, 2015.

Combining access to both music streaming and video streaming in one subscription may appeal to a broad number of users. But in order to capture interest, YouTube is going to have to go beyond its own talent pool to produce what viewers are ultimately after — high-quality content.

If it fails to ignite interest, however, YouTube can always fall back on ads.