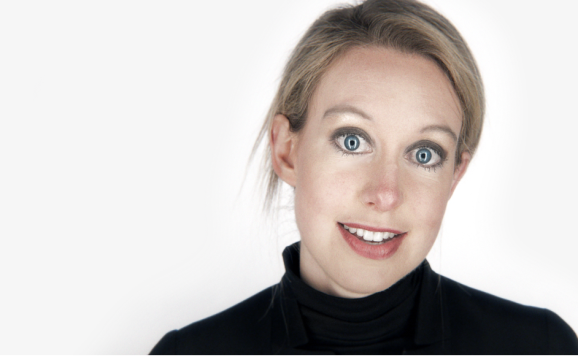 Elizabeth Holmes, the CEO of blood-testing startup Theranos, has been in hot water since a scathing Wall Street Journal report about her company appeared last week. Today she was interviewed onstage at a WSJ conference and gave her side of the story.

The Theranos blood-testing technology requires a far smaller blood sample than traditional tests, and it returns results much faster. That technology has attracted millions in venture capital for the startup.

But the Wall Street Journal claims that many of the 280 types of tests Theranos does are actually done on machines made by other companies, like Siemens.

She started her comments onstage today by saying the Journal story, written by John Carreyrou, misunderstood how her company’s technology does what it does.

“I read what was in the article. I thought it was false, and we disagree with it,” Holmes said.

Holmes said that her company actually never used other companies’ equipment to do the blood testing.

Following this, Holmes descended into some of the fineries of how the company’s testing equipment is used and the various tests they perform. She said that third-party equipment, like that from Siemens, is sometimes used for tests where blood is drawn into a syringe from the arm, but not on the pin-prick blood samples.

She also said that after a request from the Food and Drug Administration prompted by the WSJ article, her company is now pausing operations to switch over to FDA-quality systems. FDA officials, she said, did an inspection of the Theranos testing process.

Holmes spent a good part of the interview discrediting the sources in the WSJ report.

The Carreyrou article relied on a total of seven unnamed sources, all of whom have been contacted by Theranos.

Holmes, whose father was a reporter at the San Francisco Chronicle, said Carreyrou talked to four unnamed former Theranos employees, one of whom worked at the company for two months and was terminated. Those sources were clearly “confused” about what the company does.

A few of the sources quoted in the article have now told Theranos that their comments were misquoted and have offered to help set the record straight, Holmes said.

Another source lists a competing lab on his personal website. Still another source demanded $2,500 to talk to the company for one hour, Holmes said.

Asked about the future of her company after the WSJ report, she said:

“We’re the exact same company as we were last Wednesday before the two articles were published” Holmes said. “Just because some guy reports false stuff about us doesn’t change our tech,” she said.

(Another person, venture investor Jean-Louis Gassee of Allegis Capital, got tested using Theranos and wrote a critical personal account of his experience.)

Toward the end of the interview Holmes was asked to address the central question of whether the Theranos technology really works.

Asked why the results of the same tests, as reported in the article, yielded such different results, Holmes said it’s unfair to take test cases out of context and report that the results were false. The medical contexts in which the tests were ordered must be considered, Holmes said.

However, her company has chosen not to open the technology to formal clinical testing with peer review, as is customary. She says her company is now spending all of its time providing information to the FDA. She says there are hundreds of points that must be answered.

“If you’re trying to work on 120 FDA submissions at the same time, you don’t have much time to sleep,” Holmes said.

All in all, Holmes did a reasonably good job of attacking the WSJ report and defending her company. And the audience watching gave her a big round of applause when the interview was done.