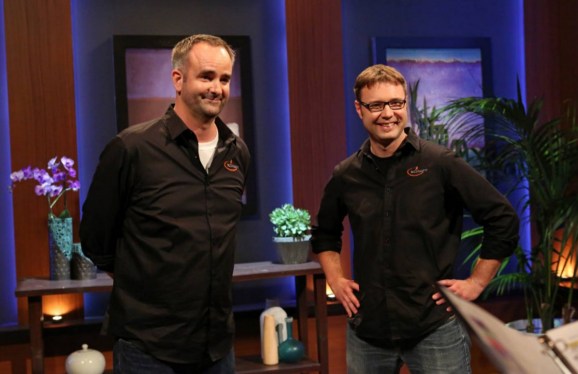 [Updated: 7:49 am. The story has been corrected to note the uncertainty of the investment pitch]

The investors on Shark Tank aren’t the kindest and gentlest sources of money. But the makers of a new kind of drone hope to convince the celebrity investors to put some of that money into xCraft.

Charles Manning and founder JD Claridge have made their pitch on a pre-recorded show of Shark Tank. They want to raise money for a drone that can take off like a helicopter and move forward like an aircraft. The outcome will be unveiled on Friday when the Shark Tank episode airs on ABC.

Meanwhile, the company is also re-launching a crowdfunding campaign for a Phone Drone, a drone that uses a smartphone to overcome the limitations of other consumer drones on the market.

XCraft is launching a Kickstarter campaign for the Phone Drone to raise additional money for production. The problem with most rotor drones is that they can hover well, but they can’t shoot fast-moving subjects. They also have a short range, often limited to the range of a Wi-Fi connection or a Bluetooth wireless connection.

But the xCraft X PlusOne drone has multi-rotor capabilities that let it hover, as well as a fixed-wing design that gives it high-speed flight. You put you smartphone into the drone, and the drone then uses that device to take pictures or videos. The X PlusOne can fly at 60 miles per hour, and pitch over 90 degrees.

The result is a drone that is capable of long-range flight and can perform stunts such as skimming the treetops. The xCraft drone can self-stabilize in both hover and forward flight modes. It also has a longer flight range because it relies on either preprogrammed flight paths or upon a connection to the smartphone via cell phone signals.

The original xCraft drone is known as a hybrid VTOL (vertical takeoff and landing) UAV (unmanned aerial vehicle). It can take off like a helicopter and then move forward as if it were an airplane. It can be useful for photographers, hobbyists, and even commercial drone operators who use it for precision agriculture or surveillance.

Manning said the xCraft design is unique from other UAVs built by DJI, Parrot, or 3DR because of the hybrid design. In addition, its interchangeable nose cone enables various camera types to be attached to the frame of the UAV.

Meanwhile, Manning said the company has completed production units for its Kickstarter fans. The company beat its Kickstarter crowdfunding goal by 300 percent, raising $143,400. The early xCraft units are now shipping. So far, xCraft has raised less than $1 million from a variety of sources.

The Shark Tank episode airs on Friday, October 23, on ABC.

“We did have to go through a variety of hoops to interview prior to being selected for filming,” Manning said.

Manning said the Phone Drone’s cost can be kept relatively low because it leverages the navigation, motion-sensing, camera, and operating environment of the phone. Using the phone also makes developing drone apps easy because they can be based on the common iOS or Android operating systems.

One new feature that comes from this integration is the ability to embed Phone Drone features into the Periscope app – enabling aerial flight with Periscope livestreaming – while tethered to a secondary phone. XCraft tried a crowdfunding effort for the Phone Drone earlier this year, but didn’t hit its target.

Manning is also well-known in mobile app circles as the chief executive of Kochava. He met Claridge, an aerospace engineer, and agreed to mentor him for the purpose of commercializing Claridge’s designs. They formed a company in 2014 and currently have a team of six in Sandpoint, Idaho.