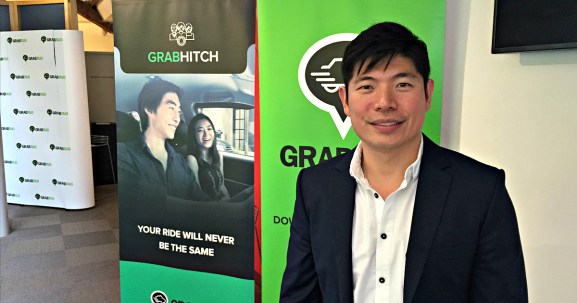 GrabTaxi’s cofounder and chief executive, Anthony Tan, — who today announced the launch of the company’s new peer-to-peer carpooling service in Singapore — says the startup is now Southeast Asia’s “largest on-demand transport app” ahead of rival Uber and told VentureBeat at a press event, “I don’t think about Travis.”

Travis Kalanick is Uber’s outspoken and somewhat controversial cofounder and chief executive, with a reputation for publicly bashing competitors.

For example, he recently slammed U.S. competitor Lyft after it announced backing from (and a new partnership with) China’s dominant ridehailing app, Didi Kuaidi, earlier this year. “I guess Didi has a few percentage points ownership in Lyft… I don’t see the upside for Didi,” he said.

But Tan remained ever the diplomat.

“I don’t look at Travis. I look at how our competitors serve the market, and how we can out-serve the market,” Tan said. “We were the first to launch cash [payments], they never had cash. We were just much more local, and now they are learning that from us.”

When pushed about the head-to-head battle between himself as GrabTaxi’s CEO and Kalanick as Uber’s CEO, Tan pushed back, “I don’t see it like that. I see it as, as long as I know what I do personally is right. So, for example, launching GrabHitch: Will it make Singapore a better place? Yes… Can I sleep at night better? Yes. Am I doing anything spiritually wrong? No. Will I know that I will go home to a better place? I know.”

“We feel pretty blessed of where we are today, and where we’re moving towards,” he added, but declined to comment on how his personality and leadership style differ from Kalanick. “In general, there’s a mutual respect for entrepreneurs… Entrepreneurs are a different breed of people. We look at risk differently, we look at opportunities differently. We’re also hyper-paranoid. I think that’s very common.”

Despite the diplomatic remarks from Tan, I can’t help but feel that Kalanick is coming for him — and everyone else in the space — with guns blazing.

GrabTaxi closed a $350 million funding round in August — at a valuation of well over $1 billion — from investors including Didi Kuaidi (who, as mentioned before, also backed Uber competitor Lyft). But Tan said there are currently no plans to raise more funding.

“We haven’t even started using a lot of our capital as of yet, so right now we’re in a good position,” he said.