IBM has launched a new app that uses the IBM Watson platform to help consumers predict which products are hot and likely to sell out at Christmas. 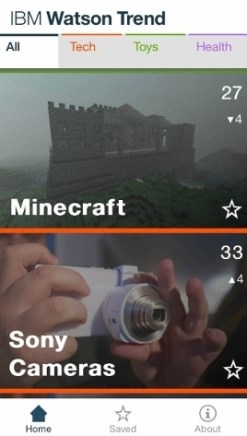 In effect, the IBM Watson Trend app looks at a ton of online conversations across social networks, forums, comments, blogs, and more. It then figures out what people are talking about, deduces which products they’re currently buying, and analyzes whether that purchase represents a passing fad or a trend likely to continue through Christmas and beyond.

The sentiment analysis is crucial here. Simply tracking key words wouldn’t necessarily reveal which products people actually like. Increased frequency of mention could be the result of a group lambasting that product, for example. But by digging into the language used, covering context, content, and sentiment, IBM Watson hopes to create a more assured picture of what’s trending.

At the moment, you can view the top 100 trending products across consumer tech, toys, and health. The app doesn’t just give you a list of top-scoring products, though — it actually tells you a story behind the trend using real language.

For example, you may read: “Samsung TV owners are very pleased with their purchase across many different sized units – 40″, 50″, 60″ and more” and “…the latest buzz around the TVs is centered around the affordability of Samsung models with 4K resolution.” While the language is slightly stilted, it’s a pretty good attempt at sounding organic.

In August of last year, IBM announced it was opening up IBM Watson to researchers. The Watson Discovery Advisor is a cloud-based tool that lets researchers access Watson’s big-data processing powers to expedite their own work.

IBM later announced its huge new Watson HQ in Manhattan, which is designed to help serve local companies, and revealed that Watson was finally being added to the company’s public cloud service, Bluemix.

With the IBM Watson Trend app, the company is demonstrating one of many scenarios Watson can be used in. And by doing so, it probably wants to lure companies with their own ideas of how Watson can be put to use.