Microsoft launched Skype for Business in April, and began upgrading customers using the Lync 2013 client and the Lync Online service. A month earlier, however, the company promised to launch new enterprise features in preview “this summer.” In July, the company delivered and committed to having all three features out of preview by the “end of calendar year.” That time has now arrived: Enterprises can get all three starting on December 1.

Skype Meeting Broadcast lets you broadcast a Skype for Business meeting on the Internet for up to 10,000 people. Attendees can join via their desktop browser or mobile device, and participate in real-time polling via Bing Pulse and chat via Yammer. Microsoft expects the feature to be used for virtual town hall-style meetings as well as public webinars.

PSTN Conferencing lets you join a Skype for Business meeting in Office 365 by dialing in and lets you add someone by dialing out to their landline or mobile phone. It is meant as an offline alternative; online meetings can include people in places with no Internet access.

Cloud PBX with PSTN Calling lets you make and receive traditional phone calls in Skype for Business. The Skype for Business client can manage calls with features like hold, resume, forward, and transfer, thanks to the enterprise voice technology available in Lync Server and Skype for Business Server. The feature includes an option to use existing on-premises phone lines for inbound and outbound calling. Office 365 customers can also subscribe to Microsoft calling plans and phone numbers, starting in the U.S. with more markets coming later.

Office 365 users can thus leverage Skype for all their written, audio, and video conversations. “The Office 365 Skype for Business voice and video services are based on an intelligent real-time network, spanning Microsoft’s global data centers, to deliver secure, high-quality voice and video traffic at the speed of light across the globe,” Microsoft said in March.

What the company didn’t share until today is pricing. These features are part of a new suite called Office 365 E5, which compares as follows: 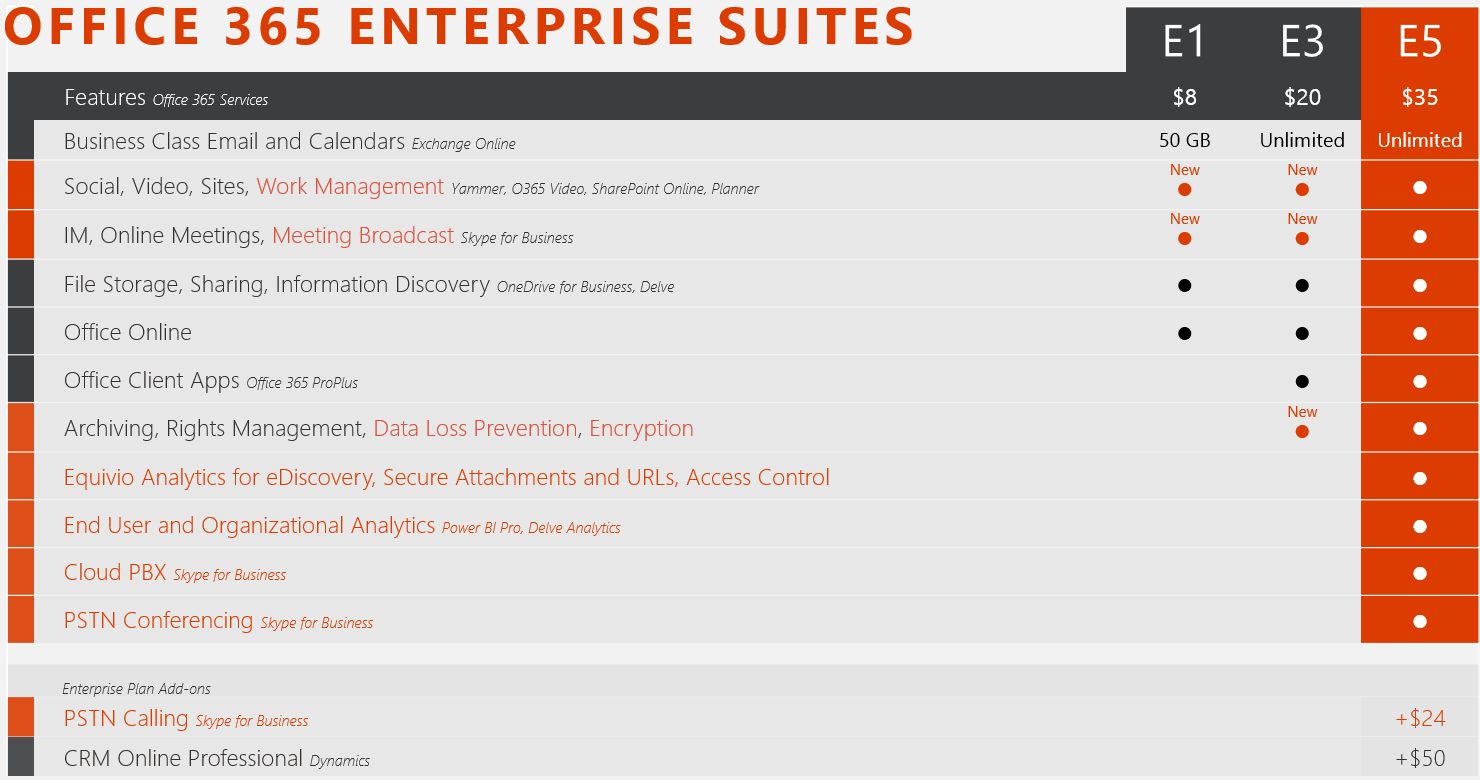 All of these new capabilities are available now for enterprise customers. Microsoft is hoping that by bringing the communication stack right into Office, enterprises will be able to replace their separate meeting systems and PBX systems with a single solution (the company estimates over half of its business customers are currently paying for multiple conferencing solutions).

Microsoft has hardware partners building audio conferencing solutions. The Polycom RealPresence Trio for groups and Polycom VVX desktop phones, for example, are the first phones qualified for the new Skype for Business services in Office 365.

Application partners are also building solutions like contact center applications that work with Skype for Business and Office 365. Microsoft wouldn’t give an exact number, but did say “hundreds” of partners across many different industries are on board.

With Skype for Business, Office 365 is supposed to offer a complete platform for meetings, calling, video, and sharing. And if the company can charge more on a per user, per month basis, why not?