If you’re looking for a lightweight but full-featured laptop/tablet combination device, you could buy a Surface Pro 4. Or, if you want to save a little money, you could buy HP’s new Spectre x2.

But the tablet’s flaws, like short battery life and an imperfect trackpad, make me think of an old saying: You get what you pay for.

That said, HP has packed many niceties into the Spectre x2. When you pick up the device and start using it, they become clear immediately.

The stainless steel bar on the back of the tablet might look flimsy from a distance, but in fact it’s sturdy. It lets you type comfortably from many angles, even in your lap. 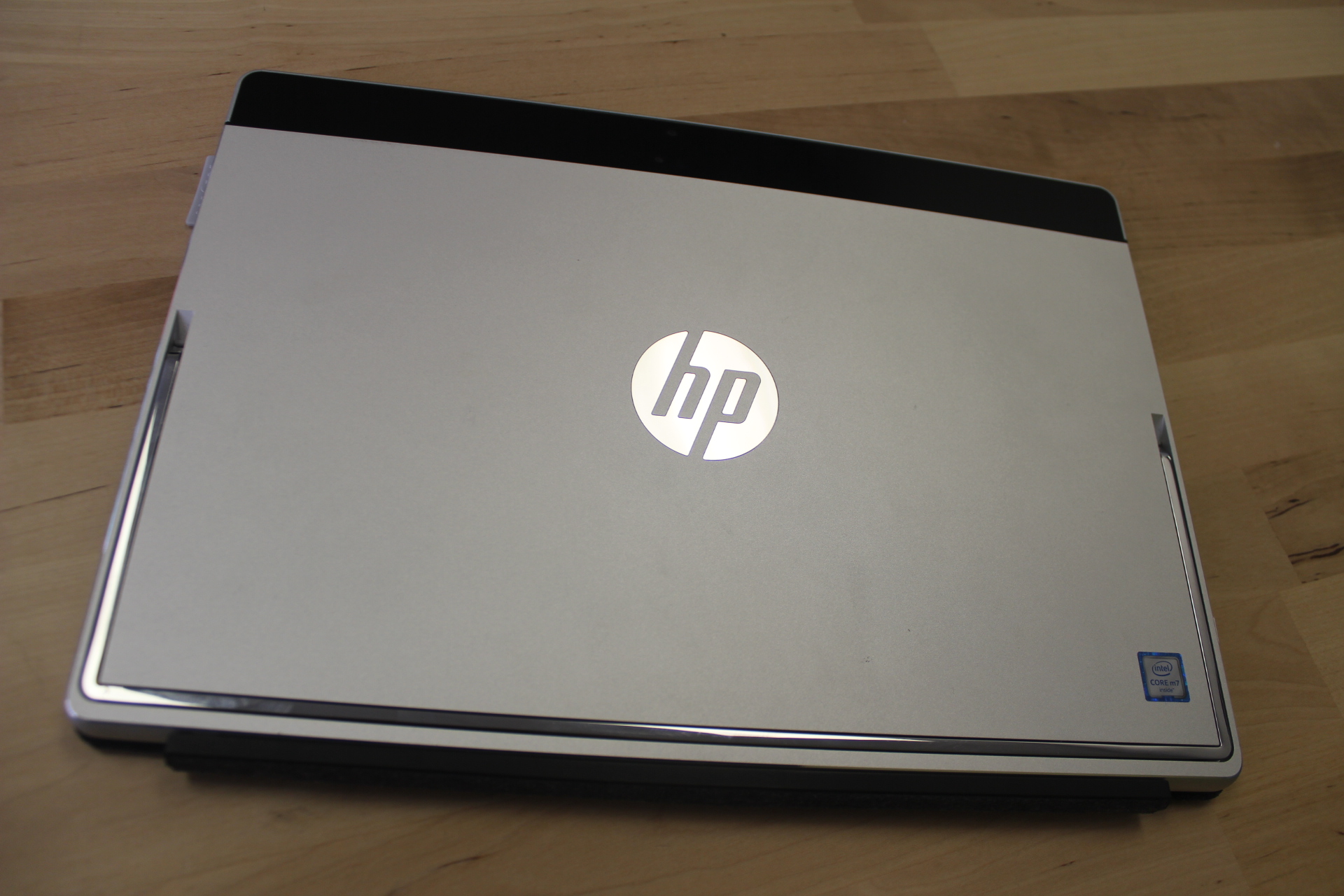 Above: The HP Spectre x2 at rest.

With its 12-inch screen, it’s big enough to show you everything you need to see when you’re working or playing, but it’s not so big that it’s clunky. It’s a perfectly suitable pocket rocket for a flight. It works swimmingly even when you’re in the middle seat on a flight and the person in front of you leans his seat back — which is what’s happening to me right now, as I type this review. It’s certainly more portable and flexible than the 3.26-pound x360, which starts at $899.99.

I enjoy typing on the attachable keyboard. To me, it feels better than the detachable Type Cover that you can get for the Surface Pro 4, and a whole lot better than the Surface Pro 3 Type Cover. Each key stands alone and has a good amount of travel. You know you’re typing on it because you hear it — and I like that. Of course, you can type with the virtual keyboard if you want, but 99 percent of the time, I prefer the detachable one.

The 1920-by-1280 Full High Definition IPS display works gloriously for garden-variety computing, as well as watching 1080p videos and flipping through high-resolution photos.

I never heard the x2 make noise in response to my computational demands. With the Surface Pro 4, some people have complained about fan noise.

HP has flanked the tablet with a USB Type-C port on each side. Having two options for hooking up AC power in itself is a perk. But this is HP future-proofing the device, in cadence with Apple supporting USB Type-C on its new $1,299 MacBook and Google supporting it on the forthcoming Pixel C. (One or two USB-A ports would be appreciated, though.)

If I lost my Internet connection due to Wi-Fi troubles, I didn’t run into problems, because an LTE antenna with a prepaid Verizon Wireless data plan came with our review unit. Our tablet also arrived with an Intel Core m7-6Y75 chip, 8GB of RAM, and a 256GB solid-state drive (SSD). This package would have cost $1,149.99 — considerably higher than the entry-level x2.

Even with those strong points, the tablet has several shortcomings.

Let’s start with the trackpad. When you click or drag, the response isn’t always exactly what you want, and when you scroll, there’s typically a split-second of lag. That might sound like nitpicking, but when you try to click boxes to delete from your inbox and nothing happens, oh, gosh, is it frustrating. 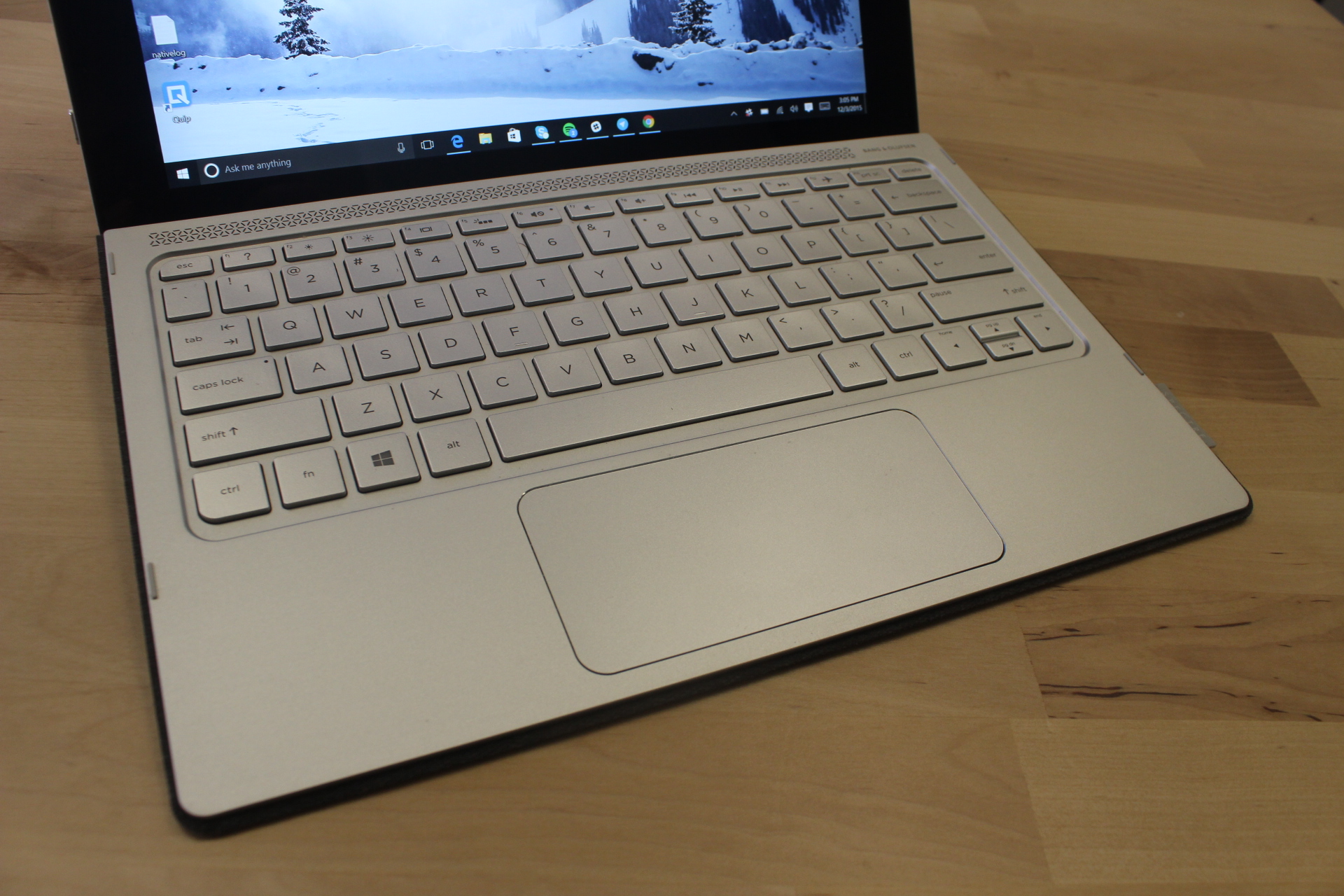 Above: The HP Spectre x2’s keyboard.

Thank goodness this is a tablet we’re talking about, and touch works very well for tapping, swiping, and zooming, panning, and so on.

While a trackpad is a wonderful thing to include — heck, the $799 iPad Pro’s optional $169 Smart Keyboard doesn’t even have one — you want it to work well, and unfortunately this one doesn’t.

More than once, dragging two fingers in the same direction on the trackpad wouldn’t trigger a scroll.

I’m happy to report that I figured out how to solve these problems: simply removing the attachable keyboard and attaching it again.

When playing Minecraft, I found that it was tricky to use the trackpad to look around while I was walking. I haven’t figured out how to solve that problem yet.

Battery life could be a lot better. HP advertises 10 hours, but I had to recharge it way too often. I got about seven hours on the high end and three and a half hours (!) on the low end.

This tablet doesn’t ship with a stylus, and it should. I enjoyed the 10 minutes or so that I’ve spent trying out HP’s compatible $59.99 Active Pen, even if it doesn’t have an eraser. Throwing the stylus in the box is one thing HP could have done to make the Spectre x2 more compelling.

While the detachable keyboard is fairly good and reminiscent of the very solid Spectre x360, it could be improved on. I have a specific bone to pick with the top row of keys. The question mark key, which automatically runs the Bing search “how to get help in windows 10” in Microsoft Edge, is not necessary. There is one on-off key for the keyboard backlight when two keys, one for brightening and one for dimming, would be more useful. And I keep accidentally hitting the dedicated airplane mode key. I guess it might be useful for the jet set, but for me it causes trouble. 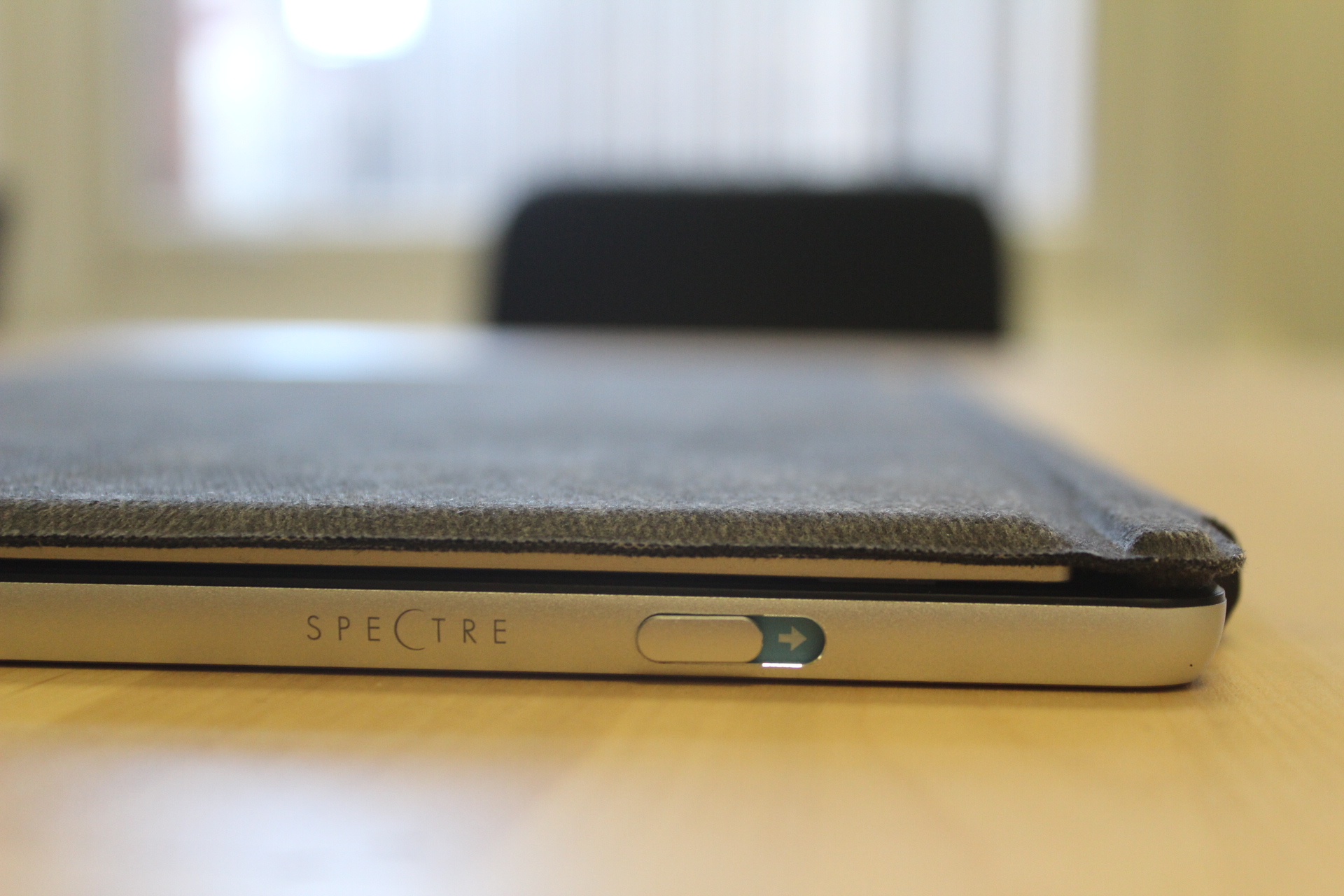 Above: The button you need to slide in order to push out the kickstand bar on the HP Spectre x2.

The speakers on this device could be louder, whether or not the keyboard is affixed to the tablet. I had high hopes when I saw the Bang & Olufsen brand name on the keyboard and the tablet. Songs sounded tinny, not full — unlike, say, the iPad Pro or the $899 MacBook Air.

At some points the computer became noticeably warm during simple web browsing. You could live with that, but it’s not a very good sign.

Finally, on the industrial design front, it takes a lot of pressure to push down the latch on the side of the tablet to swing out the kickstand that props up the x2. The latch requires so much pressure that some people had trouble doing it at first and thought something was wrong.

All things considered, HP’s Spectre x2 looks nice on paper and even in person, especially considering the price, but after using it for a couple of weeks I’ve discovered some real issues with it.

Now that HP is free of its enterprise business, the company might well have the capability to focus more on consumer products like this and make it really shine.

I hope so, because the x2 is a pretty good base to build on.