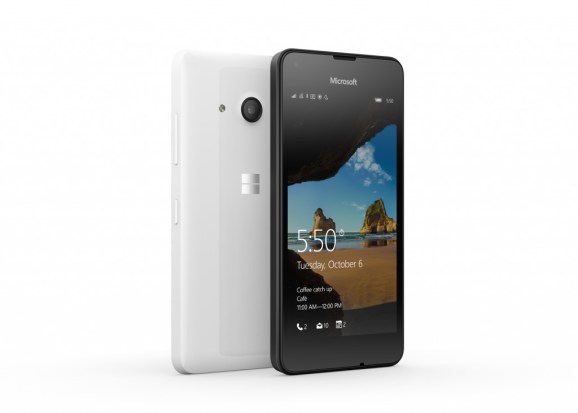 First announced back in October, the Lumia 550 is only available in Europe from today, but Microsoft says that it will be arriving in other regions globally “in the coming weeks.”

The main selling point of the device, besides its low price point, is that it comes bundled with all the usual Microsoft apps and features, including Office, Cortana, and OneDrive. The tight integration with OneDrive means you can work on your files across devices and pick up where you left off. However, it doesn’t pack the most powerful of specs — it comes with 1GB of RAM, 8GB of storage (expandable up to 200GB with microSD), and a 5MP camera (2MP front-facing).

Though the Lumia 550 is very much a budget device, it’s not the cheapest Lumia-branded phone to hit the market. Back in January, Microsoft launched the $80 Lumia 435 and $90 Lumia 532, though they were aimed primarily at developing markets.

Earlier this year, Microsoft wrote off $7.6 billion following its Nokia acquisition, and CEO Satya Nadella has refocused the company’s efforts away from “devices and services.” However, it hasn’t given up on the smartphone realm — with its new Windows 10 phone lineup, Microsoft is still hopeful about gaining some traction in a market dominated by iOS and Android. The new operating system strives to unify the mobile and desktop experience by letting developers build apps that work across all Microsoft platforms, including phones, tablets, PCs, Xbox, and Internet of Things.