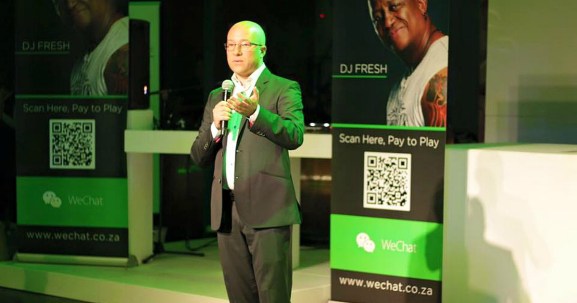 Barely two weeks after launching its peer-to-peer mobile wallet in South Africa, Tencent announced on Tuesday a new $3.5 million seed-stage fund to get small businesses and startups in the country selling their goods and services on WeChat, its popular mobile messaging app.

Specifics relating to expected amount per investment/deal were not disclosed.

WeChat already enjoys around 600 million users, 200 million of whom have credit cards attached to their accounts. And while online-to-offline (O2O) services on WeChat — such as hailing a ride or placing food delivery — have been largely limited to the China market, Tencent is clearly keen to push international.

In fact, Tencent only just opened up its mobile payments service to overseas transactions for the first time last month, with the South Africa WeChat mobile wallet launch representing its maiden voyage beyond China.

“The fund will be used to identify and support tech-enabled businesses by assisting with rapid market access using the WeChat platform,” Tencent said in a blog posting.

“Access to markets was listed as one of the biggest inhibitors to growth for tech-enabled businesses in the recent Emerging Companies survey conducted by PWC and Silicon Cape.”

Brett Loubser, head of WeChat Africa, said support from Tencent will include “technical integration and communications tactics across the Naspers stable and other suited channels.” Naspers is South Africa’s largest Internet and media group, offering a wide range of ecommerce services for businesses.

Beyond that, Tencent said that it’s “increasingly focused on integrating with early-stage businesses whose models strategically fit with, and clearly demonstrate, the power of the platform and its positioning in the market.” I’ve previously dived into some of the ways businesses are already using WeChat — and not just in China.

As to this new seed fund, Tencent doesn’t plan to run it all by itself. Instead, it will tap tech strategy practice firm Batstone to source and coordinate possible deals. (A dedicated application page has been set up here, where Batstone and Tencent will be accepting pitches from January 18, 2016.)

It looks like we can expect to see more South African businesses selling goods and services on WeChat from next year — though not all business have been happy with their experience on WeChat, to date.