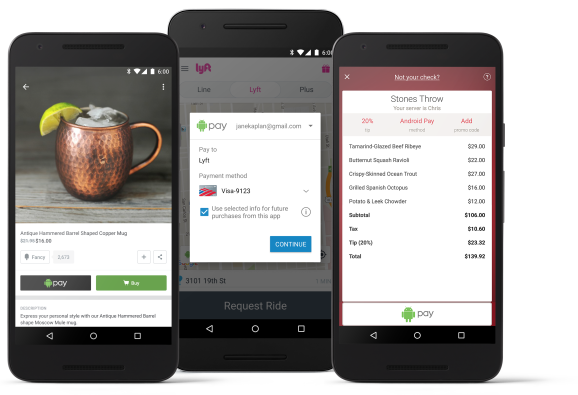 Google is rolling out the next phase of its Apple Pay competitor. Starting today, you will now be able to pay with Android Pay inside mobile apps.

Android Pay is a mobile wallet that allows Android smartphone users to upload credit, debit, and loyalty cards into their phone for use at physical retailers.

Until now, the ability to make purchases in apps is what set Apple Pay apart from its various counterparts. Now Android Pay is leveling the playing field. Initially, only a few apps will offer the new single-touch payment method.

However, Google is keen on helping developers add the payment method to more apps.

Though over a million physical retailers accept mobile payments at their terminals, the tap-to-pay method hasn’t caught on with U.S. consumers just yet. But mobile payments do have a huge opportunity to gain popularity as more shoppers are browsing stores from their phones.

In addition to launching in-app payments, the company also announced plans to expand Android Pay to Australia in 2016. The company says consumers will be able to use Android Pay at stores that accept NFC payments. McDonald’s, 7-Eleven, and Telstra will be among the first merchants to accept the payment method.

Beyond Australia, Google says it plans to offer Android Pay to even more countries over the next year.