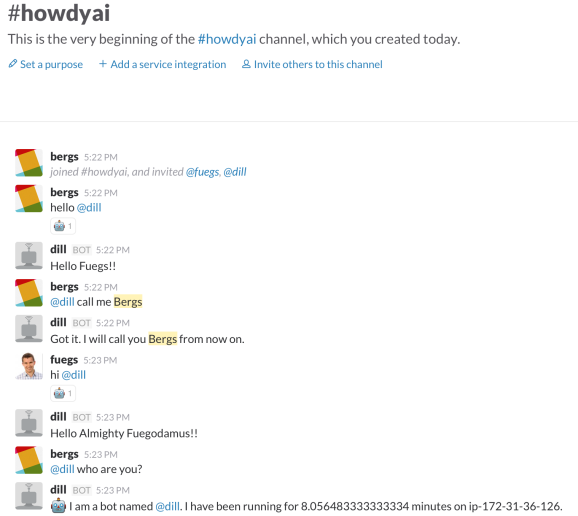 Setting up a bot named Dill with Botkit.

Today is a big day for team communication app Slack — the company is releasing an App Directory for easily discovering third-party tools that plug into Slack. But Slack is also gaining a powerful new open-source framework called Botkit that makes it very easy for developers to build their own bots.

The early-stage startup Howdy.ai developed Botkit, with plenty of input from Slack itself. Indeed, the tool syncs up nicely with Slack’s web application programming interface (API), the Add to Slack button, and incoming and outgoing webhooks.

“Our dream, and certainly we share with Slack, is that there’s going to be thousands of bots out there operating in different ways and that people will have their own personal armies of bots,” Howdy cofounder and chief executive Ben Brown told VentureBeat in an interview.

But with Botkit, there’s now a package of Slack-approved open-source software that lets pretty much anyone get a bot running. And that means Slack is about to get a whole lot more tools that integrate closely with Slack. As Slack bots become more and more versatile, Slack could become even more distinct from other work-chat tools and enterprise social networks.

The software that Howdy.ai is open-sourcing under an MIT license today is fun out of the box. It lets you change the name of the bot, find out its uptime, and change the name it uses to talk to you, among other things. You can program your bot to store data in the database of your choice, rather than in the default JSON file store.

But the documentation shows just how much you can customize it. You can program the bot to ask various questions and understand a variety of answers (yes, yea, yup, ya, sure, ok, y, yeah, yah).

One thing Botkit defines in an (artificially!) intelligent way is the frequency of its messages.

“Messages sent as part of a conversation are sent no faster than one message per second, which roughly simulates the time it would take for the bot to ‘type’ the message,” Howdy states in Botkit’s documentation.

All this technology should be very welcome to people who have wanted to build their own bots.

“Traditionally, hundreds or thousands of lines of code” would be required to get a bot up and running, Brown said. Now you can just use Botkit’s and focus instead on making the bot into exactly what you want.