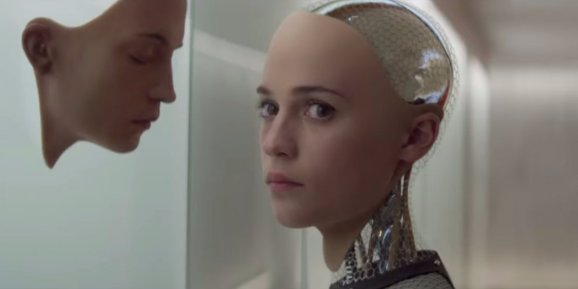 Christmas is here, which means you’re probably reading this article to avoid talking to your Trump-curious uncle.

Unfortunately it’s also the time of year when pretty much zero news is breaking, so we fill the quietness with a lot of year-end roundups and hope something breaks.

To help save you from the 24-hour A Christmas Story marathon, I’ve rounded up this year’s best and worst movies that feature (or mangle) technology. Each comes with a trailer, and many of them are already available to stream or rent. This list might be your last home to watch something tonight that isn’t stop-motion animated.

This is a big, dumb movie, but it’s in the “best” category because it’s also a bunch of uninterrupted fun. Ridley Scott spent almost a full whole decade churning out bomb after bomb, but this adaptation of Andy Weir’s novel brought back everything we loved about Ridley’s best work: explosive action with a soft heart and an unlimited VFX budget. It’s a simple premise: Matt Damon, like many of his other films, is presumed dead, so his team leaves him behind on Mars. Then they spend a bunch of money to go back and get him. In the meantime, he has to “science the shit out of” everything in order to stay alive. Damon does a great job of keeping the plot light and funny while his team back on Earth is freaking out. It’s not as good as Gravity and, mercifully, about 1 percent as long as Interstellar. It’s also well worth your time.

And, holy crap, look how amazing the UI is:

I’m just going to say it now: Star Wars: The Force Awakens is low on this list because it has no real tech angle. It’s not even sci-fi because it has no science. It’s just fantasy; a space opera made primarily for children. I saw and loved it, but let’s not kid ourselves. There’s no such thing as a podracer. The only scientific term, “parsec,” is once again mangled. JJ Abram’s insanely successful reboot earns the No. 4 spot because the technology of the future should include lightsabers, even if it probably won’t.

Something like that. Anyway, this is a fantastically quick and surprisingly tense movie. It feels more like a play and less like a by-the-numbers biopic. We see Michael Fassbender, playing Jobs, doing a lot of frantic pacing and work/life juggling in three 30 minute acts. Each ends just before major Steve Jobs keynotes. It’s funny and packed with white-hot dialogue, and Kate Winslet delivers the most Oscar-worthy performance I saw all year.

It’s a shame this movie bombed.

When I saw the first teaser for this movie back in 2014, I heard the plinking piano notes that open the greatest movie theme ever recorded and immediately got that little cry lump in the back of my throat. It made an unreal amount of money at the box office, and it ended up being pretty good. (SPOILER ALERT: Life finds a way.)

Aside from my emotional bias, I’m including Jurassic World in the “best” category for the extreme lengths the filmmakers went to make to make a theme park full of “open-source dinosaurs” feel convincing (or at least halfway plausible).

Not only is this the best technology-centric film of 2015, it’s a strong contender for the best movie I saw all year.

Alex Garland directs a quiet, white-knuckle thriller about a tech CEO-turned-mad scientist playing god. Oscar Isaac, reminiscent of a weightlifting Sergey Brin, has perhaps cracked the key to true artificial intelligence, so he brings in a bright, unsuspecting employee to administer a completely unethical Turing test. A gorgeous and mind-bending story unfolds, quietly and delicately, like an origami dove that might accidentally destroy humankind. The claustrophobic story plays out in the antiseptic Norwegian hallways of this mad genius’ sprawling estate. It’s very Kubrick but also so refreshingly unique.

I know that’s vague, it’s better that you know how great this movie is and almost nothing else.

This movie was widely panned, and I’m inclined to agree.

Hackers praised the accuracy, but they still think Anonymous masks are ominous and cool. But do you know what isn’t accurate? The notion that the Adonis-like Chris Hemsworth could convincingly play a hacker. Get back to me after you deprive Hemsworth of Vitamin D and pump him full of Mountain Dew Code Red. (Which, come to think of it, is a decent title for a sequel.)

Director Brad Bird brings us another stunning visual feast, but it’s just so darn optimistic and wishy-washy that you can’t help but hate it.

It’s sweeping and whimsical and very long. The highwire swirl of comic book action feels kind of like 60 2-minute trailers for a way better movie that never materializes. Tomorrowland gives you plenty to look at, but leaves you with nothing to think about.

He stars in the film as a businessman who owns an exclusive island resort stocked with robots. His super-rich clients can “live our their wildest fantasies,” which are pretty much bad violence and sex, but – gasp – one of the robots becomes self-aware!

Maybe you’ll have a better time if you double-feature Ex Machina and then Vice. The Ex Machina plot seems so real and so frighteningly inevitable, this Bruce Willis stinker will help lull you back into a sense of security.

I’ll probably get some heat for this one, but Chappie failed to deliver on the promise of its trailer. A robot with a “REJECT” sticker on his forehead makes friends with gangsters played by equally unsubtle people. Mix in a bunch of explosions and a police state. Nobody asked what would happen if Wall-E met Robocop in South Africa, but unfortunately, you can now find out for yourself.

If you Google “Chappie,” the first three results are links to pirated versions. The IMDB appears fourth. Somehow that should tell you all you need to know.

The ability to download consciousness is the beginning of a rich premise (and maybe not that farfetched), but this movie sucks out all the depth. Director Tarsem Singh further muddies the water with a bunch of hallucinations and the result is a fast-paced movie that is wind-sprinting to nowhere.

Sir Ben Kingsley (really, dude?) is diagnosed with terminal cancer, and he luckily finds the business card of a guy who can download Kingsley’s brain into a brand-new lab-grown body. That body is none other than Ryan Reynolds, which isn’t a bad start (Note to self: pitch Xzibit on Pimp My Lab-Grown Body).

Just because it’s Christmas and Christmas is when you tell the truth: I couldn’t finish it.

That’s all, folks. No more movies to talk about for 2015. Shut your computer and go talk to your family!