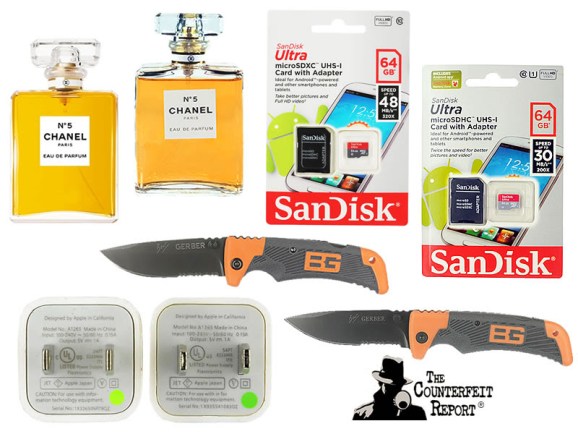 Can you tell the real items from the fake ones?

Consumers and retailers are vulnerable to a holiday gift-return scam, according to consumer protection site The Counterfeit Report. Eventually, better tech could stop this scam, but for now, it’s buyer beware.

Scammers are switching real and fake products in fraudulent gift returns. Under the scam, someone buys an authentic item, such as brand-name perfume. Then they purchase a counterfeit counterpart at a fraction of the authentic item’s cost. They switch the products and return the counterfeit to the retailer or ecommerce web site for a full refund. The consumer has a receipt, and the crush of holiday gift returns distracts the retailers from detecting the fake product, which is then resold to unsuspecting consumers.

If a counterfeit item is detected during the return process, the retailer could take action against the person who returns the item. But it’s possible that scammers could trick consumers into handling the returns. And the detection wouldn’t identify a scammer who pays in cash.

“Counterfeiting has gone from a small industry to a $1.7 trillion problem this year,” said Craig Crosby, publisher of the Counterfeit Report, in an interview. “What product isn’t counterfeit? That’s the question. This holiday return scam has permeated the retail business as well as the online ecommerce industry.”

The Counterfeit Report, an independent publication that publishes counterfeit information from 250 global manufacturers, estimates that approximately one-third of web purchases (almost $20 billion), are returned or exchanged after the holidays. Many returns are sold by the truckload to third-party liquidators for disposal. The liquidators simply don’t have the experience or time to determine authenticity, and they resell those items on ecommerce sites.

According to Rob Holmes, a private investigator specializing in tracking counterfeits at IPCybercrime, “That retail scam has been around for decades. The retailers try to authenticate items before they authorize the return. It is true that the quality of the fakes is getting better.”

To deal with the scam, the Counterfeit Report suggests that consumers avoid online purchases from China, and unauthorized sellers on eBay, Amazon Fulfillment, and Amazon Marketplace. Many manufacturers don’t authorize sales on these websites. Instead, the publication says that consumers should buy online directly from the manufacturer, or from authorized retailers with clear return policies. Consumers should buy with a credit card — not cash, PayPal withdrawals, or wire transfers.

The publication also said, “Always retain the disputed product; it is your only proof of receiving a counterfeit. If returned, sellers will simply deny it is counterfeit and sell it to another unsuspecting consumer. Dispute the purchase and request a refund from the seller or website. If a refund is denied; notify your credit card company that you have retained the counterfeit product and are disputing the charge.”

Crosby said that sometimes spectroscopy machines are used to determine if products are authentic, but they have cost around $100,000 each.

“Most consumers should be aware that a $50 Rolex is probably counterfeit,” Crosby said. “But there are items that are harder to tell. We try to make consumers aware of the problem. We bought 2,000 products on eBay. We have never received an authentic brand-name item.”

Consumers Physics is working on producing a $250 Scio scanner that could determine if some goods are fake or real, but the technology isn’t pervasive on the market yet. Crosby said he doesn’t know of any retailers who are using such technology at the return register. He also said there’s a chance of getting false positives, which could create real customer service problems for retailers.