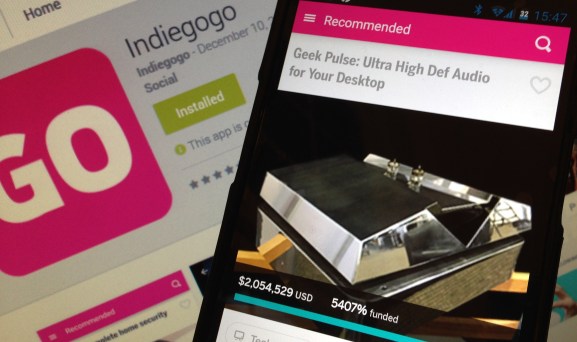 Accelerate innovation. Fortune 500. Risk mitigation. These words aren’t synonymous with crowdfunding — at least they weren’t in the early days, when the spotlight rested firmly on unlikely creators and optimistic fans. But somewhere along the way, crowdfunding changed. Real businesses flocked to the medium, and record-breaking campaigns transformed pre-orders into publicity and low-risk capital.

At first, communities like Kickstarter rejected the idea — remember when Kickstarter chased Zack Braff away with pitchforks? Two years later, corporate crowdfunding feels like the new normal. The world seems okay with the idea that corporations like Pepsi will eventually turn to crowdfunding.

The concept isn’t totally new. Enterprises will use much of the same stuff as the rest of Indiegogo’s users. It’s more like a welcome sign for the Fortune 500, complete with an Indiegogo consulting service.

We spoke with CEO Slava Rubin ahead of the launch to find out more (the discussion has been trimmed for clarity).

Rubin: Last year we announced In-Demand, shifting from campaign to commerce. This year we’ll be announcing Enterprise Crowdfunding. We’ve seen a lot of interest from the Forture 1000. We’re really working with them on strategy.

VentureBeat: Does it cost anything?

Rubin: We have an upfront fee.

VentureBeat: So it’s kind of like a consulting fee?

Rubin: It’s kind of like we’re building a relationship. It’s like when Facebook has self-service ads and on top of that they have a services team that works with the largest 1000 companies.

VentureBeat: Is this the logical next step or final evolution of crowdfunding?

Rubin: In the early days, the people that were quicker to adopt were folks who were really more interested, they thought, in just the money. But then they got market valuation … feedback … word got out that it’s not just about the money.

VentureBeat: You’re announcing this at CES. Are you hoping to ink deals there?

Rubin: We’ll be talking to them, some have already reached out. So, you know, be prepared for some interesting things coming out soon.