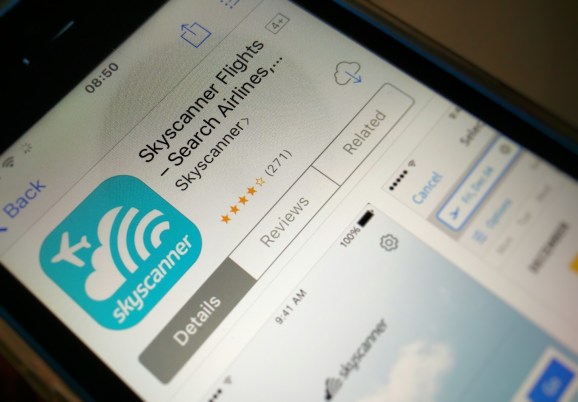 Skyscanner, one of the oldest and largest flight search engines on the Web, has raised its first major round of funding, to the tune of £128 million ($192 million).

Founded out of Edinburgh, Scotland in 2002, Skyscanner is Europe’s largest travel search engine by traffic, and the world’s second largest after Kayak. However, Kayak was acquired by Priceline in 2012, thereby elevating Skyscanner to world’s biggest “independent” flight engine.

Before today’s announcement, Skyscanner’s biggest investor was Scottish Equity Partners, which had previously plowed $4 million into the company. Sequoia had also invested an undisclosed amount in a secondary round back in 2013, purportedly valuing Skyscanner at $800 million. There are five new participants in this latest round: Artemis, Baillie Gifford, Khazanah, Vitruvian Partners, and, somewhat interestingly, Yahoo! Japan, which is already a strategic partner for Skyscanner in Japan.

The latest investment values Skyscanner at $1.6 billion, according to sources quoted by the Financial Times, conferring on it the much-coveted “unicorn” status (a private company with a $1 billion+ valuation) and making it one of Britain’s biggest tech companies.

While Skyscanner is one of Scotland’s most notable consumer tech exports, a number of other major companies have emerged from the Scottish tech realm to gain international acclaim. Fantasy sports site FanDuel was also founded out of Edinburgh, though it operates entirely in North America, where it is currently facing a number of legal entanglements. Then there’s Rockstar North, also based in Scotland’s capital, which created the massively popular Grand Theft Auto franchise that’s helping put Scotland on the video game map. Back in 2014, an audio chip giant was born when Cirrus Logic acquired Edinburgh-based Wolfson Microelectronics for $467 million.

Other notable companies plying their trade in Scotland include PureLiFi, which is working toward enabling Internet connectivity through light bulbs and “Tinder for fashion” startup Mallzee, which raised $4 million last summer.

Though Skyscanner is better known for its flight search engine, it has also branched out into other verticals, including hotel search and car hire.

“Skyscanner has enjoyed high double-digit growth rates for some years now, and has been profitable since 2009,” said Skyscanner CEO Gareth Williams. “This success is thanks to our 1,200 direct partner relationships, the trust of the 50 million travellers who use us every month, our technology, and the dedication of our teams to deliver the best experience for travellers possible.”

Williams says the company plans to use its latest cash influx to accelerate growth in the $500 billion online travel market, and to build more new products and tools for its customers.