BuzzFeed may be reinventing how news is reported in the digital age. But the listicle-loving publication is also helping to set the agenda in terms of how advertisers interact with their online audiences through advertorials that blur the lines between editorial and, well, advertisements.

Unfortunately, the practice sometimes leads to confusion among readers as to whether the content they’re reading is editorial or marketing. One BuzzFeed reader submitted a complaint to the Advertising Standards Authority (ASA), the U.K. regulator for the ad industry, relating to an advertorial placed by laundry and home-care specialists Dylon, which is a subsidiary of Germany-based Henkel.

Originally published on October 9, 2015, the article in question, “14 Laundry Fails We’ve All Experienced,” was written in the usual BuzzFeed style, with photos and user-generated content pulled in from social media. The complaint asserted that the ad wasn’t obviously identifiable as such, and the ASA agreed.

In true BuzzFeed style, the article in question has now been deleted, a practice the publication seems to favor, having previously deleted articles due to pressure from advertisers.

On the advertorial cited, there was a small piece of text that said: “Dylon, Brand Publisher.” And at the bottom of the article there was text that stated: “It’s at times like these we are thankful that Dylon Colour Catcher is there to save us from ourselves. You lose, little red sock.” 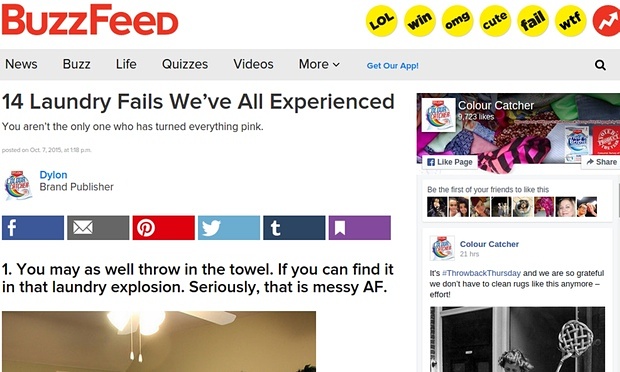 Though the ASA conceded that the advertorial was clearly marked on BuzzFeed’s homepage, where the listicle was promoted, and in search listings, where it was highlighted with a yellow label that said “ADVERTISER,” the regulator added that readers could arrive directly at the article from a number of other conduits. It said:

While we acknowledged that these elements implied a connection with Dylon, we considered they were not sufficient to make clear that the main content of the web page was an advertorial and that editorial content was therefore retained by the advertiser. We further noted that the web page was very long and visitors to it would therefore not see the reference to Dylon Colour Catcher at the bottom of the page until they had already engaged with the content.

Granted, most observant, savvy people reading this article would probably know that it’s an advertorial. But without a big red flag that states in no uncertain terms that it is sponsored content, there would undoubtedly be some readers who landed on this article and missed the warning signs. “Brand Publisher” doesn’t really say that it’s paid-for content. The ASA said:

We acknowledged the inclusion of the label “Brand Publisher” near the top of the web page next to the Dylon name and logo, but we considered it was not particularly prominent and the terminology did not, either in itself or in conjunction with the other page elements, adequately convey the commercial nature of the content to consumers.

This particular case highlights an important point about advertorials, and it’s one that will likely rear its head more in future, as advertisers and media companies continue to push the boundaries of online ads. Obviously, it’s in the interests of both the media company and the advertiser to minimize any “SPONSORED CONTENT” labeling — after all, do people really want to read articles written by a brand to promote itself? As one author noted, “BuzzFeed’s future depends on convincing us ads aren’t ads.”

Some may argue over whether it really matters — if the content is entertaining, has any harm really been done? But a line has to be drawn somewhere. If such advertising becomes the norm, then we may reach a stage where it really is impossible to tell whether an article is paid-for or not.

In response to the complaint, BuzzFeed U.K. said that because the ASA had hitherto not ruled on whether a label such as the one in the ad “would be sufficient to alert consumers to the fact that it was a marketing communication,” it relied on the practices of its U.S. arm as a guide to how it labeled advertorials. This is an interesting admission from the publication, as it will effectively lead to different advertorial standards depending on whether the ad is placed on BuzzFeed U.K., or the main U.S. version.

In its conclusion, the ASA ruled that the ad must not appear in its current form again, and that all future ads must be obviously identifiable as marketing.

Source: the ASA [via the Guardian]