ScribbleLive has figured out which people, brands, products, and categories commanded the most attention at the 2016 International CES, the big tech trade show in Las Vegas last week. The company analyzed data from more than 100 million articles from news, blog, and social media sources to identify what grabbed the most attention.

The CES Influence Report said Apple, Samsung, and Blackberry gathered a lot of attention at the show. Gamers in particular were glued to news about the Oculus Rift virtual reality headset. Apple didn’t actually appear at the show (as it never shows up), but it stole some of the attention when Apple executive Phil Schiller announced that the company generated $20 billion in sales in 2015 from the App Store. Samsung scored attention for its 11-inch Chromebook 3, and Oculus VR founder Palmer Luckey drew a lot of attention for his comments around the Oculus VR’s launch and pricing.

Here’s the verdict below on the categories that got the most attention. Mobile was the winner, but gaming, cybersecurity, computers, and VR also ranked pretty high. 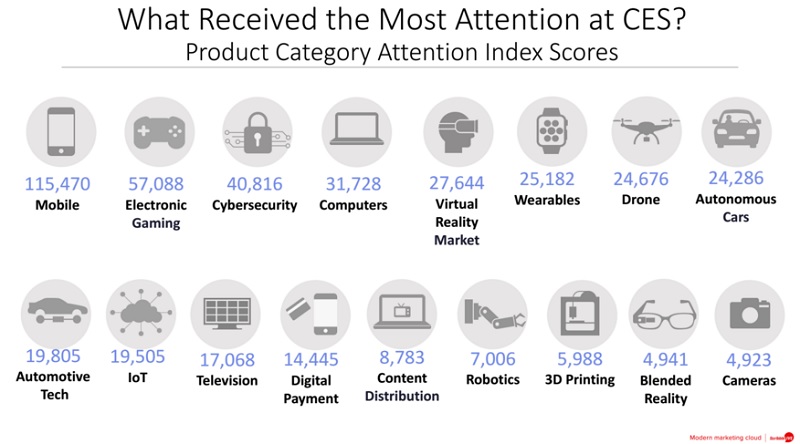 Above: The product categories that got the most attention at CES 2016.

And here’s the rankings on people. Not all of that attention was good. Palmer Luckey, founder of Oculus VR, stirred some controversy when he said the $599 pricing for the Oculus Rift was cheap. He had to backtrack and apologize, as the price was actually above what a lot of people were expecting. Ford CEO Mark Fields came in second. That makes sense, since he opened the show with the first press conference and noted that Ford would launch 13 electric vehicles by 2020.

But Schiller of Apple and Mark Zuckerberg of Facebook came in third and fourth, and they weren’t even at the show. Zuckerberg probably scored high for a post he wrote on artificial intelligence and VR. 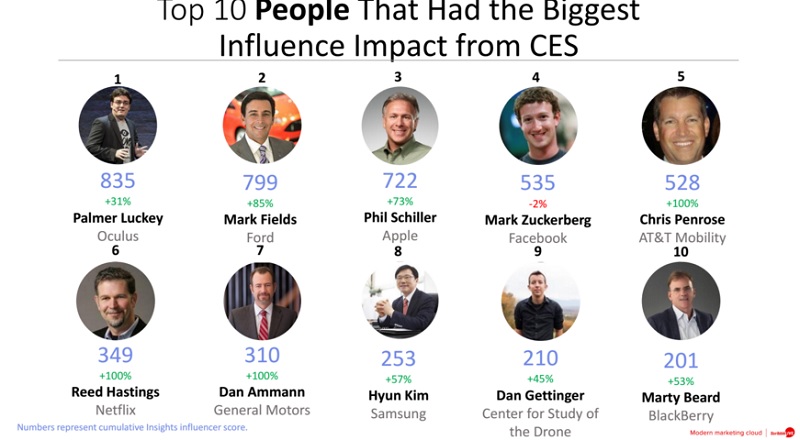 Above: The people who got the most attention at CES 2016.

And here’s the top brands that had the biggest impact. Ford, as we noted, had the first press conference and grabbed a lot of notice from it. 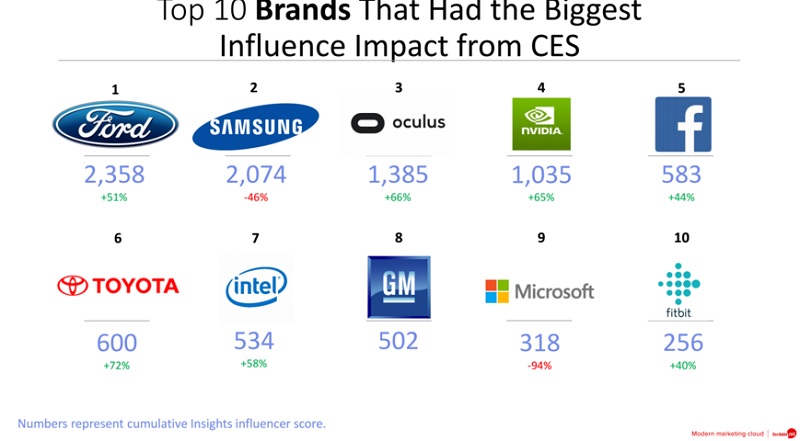 As for the top two devices that people want, the winners were the Oculus Rift and the Apple Watch. The latter, again, was not on display at CES 2016.

ScribbleLive said it identified opinions and reactions to the various product categories, people, and brands featured at the event. It calculated a proprietary influence score (the “attention index”) based on the people or entities that reacted to an announcement. This was weighted by their influence on a given theme; the credibility of the outlet where the reaction was published or consumed; and the volume of reactions generated by the opinions within the studied timeframe of January 1-8, 2016.